This is the twenty-fourth in a series of Tales from Buzzard Point that explores the rich history and traditions of legendary Buzzard Point – a legacy that the current DC United ownership may have set aside in selling naming rights for the new soccer specific stadium but is forever enshrined in the chants, songs, and hearts of Black and Red fandom. 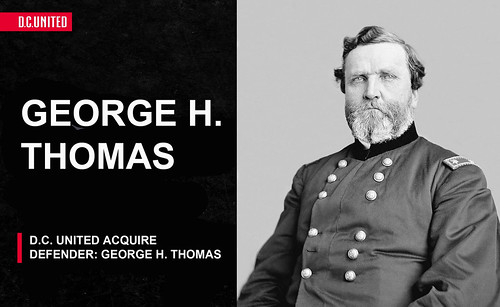 D.C United have announced the acquisition of famed defender George H. Thomas. Thomas, who has been long retired, has been reactivated for the Nashville match this Saturday.

Bringing in a player of Thomas’s quality will reinforce our squad with another proven defender as we face Nashville for the second time this season and continue to push for ultimate victory.

A dual national, the Virginia-born Thomas opted for the Union but spent most of his career in the Western Division. He is renowned as "the Rock of Chickamauga" but is also known as "the Sledgehammer of Nashville" for his success against upstart Tennesseans.

We believe that George has all the tools to be successful within our system at D.C. United. He is an unflappable, rock-ribbed defender, but also has the capacity to move forward in attack, as decisively demonstrated at Missionary Ridge.

After a brief pause, Schulz continue to extoll the good fit of newly acquired George Thomas for the team.

Though he has been long retired, Thomas lives right here in DC’s Ward 2 and is in excellent shape, for years having engaged in three-hour stamina and agility drills twice daily during DC’s rush hour. Coach Lograda assures me that Thomas is match-fit to step into the lineup against Nashville this Saturday

Series Editor’s postscript: "Tales from Buzzard Point" includes historical fiction and homage or parody. All members of the B&RU Commentariat are invited to submit manuscripts of their own researches into the history and traditions of Buzzard Point to davidrusk1020@gmail.com . All proposed tales must a) involve Buzzard Point, b) have some relationship to football/soccer, and c) demonstrate that Buzzard Point is hallowed ground for DC United and that our MLS opponents are doomed to never come away from Buzzard Point with a result.