In the second installment of B&RU's look around the Eastern Conference, we take a look at the Columbus Crew. There's a new coach, a new mindset, and a remade back four. Is it enough to improve upon last season's disappointment?

What happened in 2013: Normally your mediocre teams look back on a failed season and cite a high number of draws that should have been wins. The Columbus Crew will instead point to being unable to turn losses into draws; their 17 defeats in 2013 were the joint-third highest total in MLS last season. Over their last 21 games, the Crew lost 13 times. If anything, their finish - 8th place in the East, 16th place overall - is dead on when you look at how they picked on MLS's worst sides (5W-0D-1L) but lost 12 of 20 games against playoff teams. Every year MLS produces a team that is bad, but not egregiously bad; in 2013, that team was the Crew.

Columbus had been drifting towards such a season for years under Robert Warzycha, and in the end it cost him his job (though surely Anthony Precourt's purchase of the team would have put him on thin ice anyway). Gregg Berhalter has taken over and intriguingly chose to focus on a rebuild at the back rather than add to an attack that is utterly reliant on Federico Higuain and Dominic Oduro.

If not for the desperately needed rebuild in our neck of the woods and the top-to-bottom culture shift up in Toronto, the Crew might have been MLS's biggest offseason overhaul. Few tears were shed for Warzycha, but in Columbus fans were understandably nervous after seeing Gaven retire far earlier than expected and longtime defensive stalwart Marshall shipped out to Seattle.

On a surface level, things won't really change. After giving tactics nerds the vapors by talking about a back three - even mentioning a 343 before a 352! - Berhalter looks set on a 4231 that will occasionally look more like a 442...just like Warzycha played. The attack will go only as far as Higuain and Oduro take it...just like Warzycha's Crew were.

The real difference with this Columbus side appears to be in the back; where Warzycha seemed to prefer size, strength, and a very conservative mindset, Berhalter has preferred a more modern take. Marshall's old-fashioned aerial dominance - he's arguably the best in MLS in that department, it should be said - has been replaced by the crafty approach of Parkhurst, who mysteriously grew two inches while in Europe to his current listed size of 5'11". Gonzalez will join him in defense having last been seen by American fans playing the center-most role in Costa Rica's 343 at home/541 away set-up. At left back, conservative choices like Tyson Wahl and Agustin Viana will step aside for Waylon Francis, a hyper-attacking option last seen marauding down the wing for CCL regulars CS Herediano and scoring goals like this.

What this likely means for the Crew is a more appealing style of play. Warzycha's teams were fairly dour even at the best of times, but Berhalter has installed several defenders who are comfortable with the ball at their feet. Columbus might not be a truly attack-minded team - Berhalter was dismissed by Swedish side Hammarby amidst grumblings about a lack of attacking play - but they'll at least be a more progressive team that emphasizes possession, intelligence, speed, and technique over big dudes winning headers.

Case in point, contrast the choices in the engine room. Warzycha found it very difficult to trust Tony Tchani due to his adventurous take on what it means to be a ball-winner in midfield. For the departed coach, Tchani's roving from his position was simply too risky. Berhalter, on the other hand, sees Tchani's Ricardo Clark impression as a way to win turnovers higher up the field. It's a more modern, aggressive look at how to use defensive midfielders, and it's a way of thinking about the game that Berhalter will apply all over the field.

All that said, the change in process might not matter that much, because Columbus has flaws in front of both goals. In the attack, Higuain and Oduro are obviously high-quality players, but they won't have much help. Jairo Arrieta is a decent supporting player, but the Crew really need to be doing better than having him as their first-choice striker. Oduro could be moved up front, but the other right wing options consist of Hector Jimenez - who never made a realistic push to start games with the LA Galaxy when everyone was healthy - and possibly Bernardo Anor, who like every other Crew attacking option is respectable depth rather than starting-quality (not to mention the fact that he's probably the starter on the left flank).

In goal, meanwhile, Academy product Matt Lampson looked pretty run-of-the-mill while standing in for Andy Gruenebaum last year. The more experienced Steve Clark has been brought in after spending four seasons as a starter in Norway, but before that Clark was an undrafted prospect who ended up with the Charleston Battery after his NCAA career. I'm not going to pretend I ever saw him play with Norwegian side Hønefoss BK, so let's play it safe and assume that Clark is no better or worse than Gruenebaum. That means no matter who Berhalter prefers, Columbus will not be starting a goalkeeper in MLS's top 10, and could end up as the team with the weakest set of GKs in the league.

There is also an issue in the back, with odd pronouncements about playing Parkhurst at right back to help his push for a spot on the USMNT's plane to Brazil, then switching to center back - where Berhalter wants to play him - after the tournament. Given how many players on the national team are used differently with their clubs than when playing for the US, this is a baffling stance to take. It could well be that Berhalter still has no real idea of what to make of his roster; certainly one can't imagine MLS's better coaches doing the same thing. 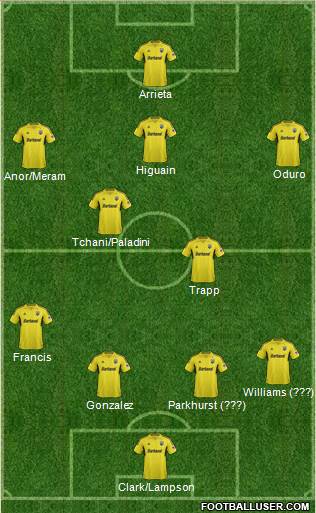 Best-case scenario: The Crew's gang of MLS role players play above themselves while Higuain and Oduro avoid injury and are at or near their best. The Ticos playing in the back join Gonzalo Segares in the ranks of Costa Rican defenders who actually succeeded in MLS, and the Crew end up finding themselves in 3rd place a la last year's New England Revolution.

Worst-case scenario: One of Higuain or Oduro misses significant time, Gonzalez and Parkhurst can't ever decide who the decision-maker at the back is, and the gang of MLS role players all play like role players. Guys like Jimenez, Justin Meram, and Ryan Finley play start a significant number of games, and Columbus ends up in a fight to avoid dead last.

Is this a team D.C. United can finish above? If we're a playoff team, we'll almost certainly be ahead of the Crew. In the incredibly tight East, however, an odd bounce or hard-luck loss against Columbus could easily end up the difference between a playoff spot and a 7th place finish.