We start B&RU's look around the Eastern Conference with the Chicago Fire because of the alphabet. Frank Yallop has changed the formation and made several moves, but the Men in Red still look very dependent on Mike Magee.

No seriously: Before Magee's Chicago Fire debut - naturally against United, because 2013 was just that kind of year - the Men in Red were 2W-2D-7L. Extended over a full season, that's Chivas/TFC form. From that point on, the Fire were 12W-5D-6L; that form over 34 games would translate to 61 points, which would have won the Supporters Shield in 2013.

In any case, Magee's MVP season failed to cover for the fact that Frank Klopas once again had to make a dramatic change in either formation, approach, personnel, or some combination of all three. Scrambling after a plan stopped working summed up the Klopas era in Chicago, and it wasn't particularly surprising to see the Fire looking for a new coach once the season ended with them (just barely) outside the playoffs.

(Quick aside: Klopas ended up in Montreal with the team that edged his Fire out of the playoffs on goals scored; he now coaches Maxim Tissot, whose 87th minute equalizer in a 2-2 draw on September 28th is the closest thing to a single moment that cost Klopas his old job.)

Plenty of attempts were made by observers to say the change in form was due to Magee and the acquisition of Bakary Soumare, but Soumare and Austin Berry were never a compatible pairing at center back. With Soumare, the Fire still gave up 35 goals in 23 games (or 1.52 goals per game); before he was on the scene, they gave up 1.55 goals per game. Either way, their defense was actually worse than Toronto FC's in 2013, which is to say it was terrible.

Frank Yallop has arrived after watching his San Jose Earthquakes completely lose the magic they had in 2012, and he's been busy. Arevalo Rios was deemed too expensive to keep, Anibaba was packaged with a draft pick swap to get Hurtado and Ianni from Seattle, and only recently did we see the Fire move Berry while citing salary cap issues.

Still, the Fire weren't just focused on defenders. Joya looks to be a very smart pick-up, and Academy product Shipp would have likely been a top five draft pick if not for his Homegrown status. That adds real competition to a team whose attackers not named Magee often flatter to deceive.

The issue is figuring out what he'll do with Magee, who is a) Chi-town's answer to Chris Wondolowski and b) has only been in camp since Thursday after holding out for a better contract (or, if you believe the Fire, a "personal matter"). Playing him as a lone forward seems like a bad idea, but then no Fire player worth starting is particularly suited to that job. Yallop played a 4141 occasionally with the Quakes and used Wondo all over the place when he did, and of the two Magee has more experience as a midfielder.

Complicating the issue is the push Joya and Shipp have made in the preseason, where both look capable of pushing or even surpassing guys like Chris Rolfe and Alex in the central roles in front of Jeff Larentowicz, who will feature in the anchor role. Patrick Nyarko will feature on one wing and continue to be comically overrated by Fire fans - in the Windy City, Nyarko is considered to be significantly better than George Best or Garrincha ever were - but the other side is a question mark. Dilly Duka is the incumbent, but Joya could force the issue if Yallop considers him on the right wing (pushing Nyarko to the left).

The weakest spot for the Fire is up top, where Juan Luis Anangono didn't exactly impress in 2013. He also seems like the kind of striker who isn't comfortable playing alone up front; we could see Yallop scrap the 4141 for a 4132 to get Magee closer to goal (Yallop is nothing of not pragmatic), but up to this point he's gone exclusively for the 4141. The Fire did snap up Swiss-American forward Giuseppe Gentile via similar means to how United got Christiano Francois, and they recalled Orr Barouch from an 18 month loan in Israel, but they still look like a team that is placing all of its eggs in the "Magee will definitely be in the Golden Boot race again" basket.

At the back, things are more settled. Lovel Palmer - last seen looking upset after his penalty kick miss for Real Salt Lake finally settled the 2013 MLS Cup - will probably start at right back over 1st round pick Marco Franco. Yallop appears to have settled on a Hurtado-Soumare partnership; Hurtado is not an improvement on Berry in a vacuum, but on paper he's more compatible with Soumare. Gonzalo Segares will once again be first choice at left back, which means he'll probably grab a goal against the Black-and-Red at some point in 2014 like he always seems to do. That group will protect Sean Johnson, who quietly lowered his well-known tendency for big mistakes as 2013 wore on but is still alternately brilliant and shaky in goal. 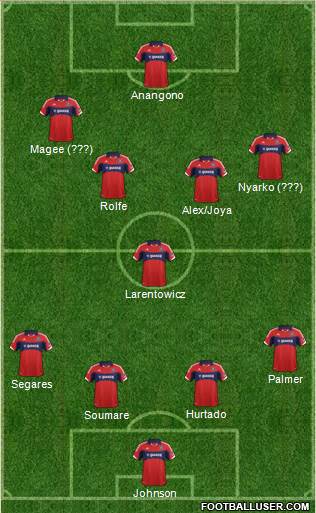 Best-case scenario: Magee somehow plays as well as he did in 2013, the new-look defense hits the ground running, and the creativity in the midfield makes up for the lack of a truly threatening #9. Even with all of those things happening, I have a hard time seeing Chicago climbing higher than third or fourth. If we want to get really crazy, they sign Chicharito after the World Cup and become an MLS Cup contender.

Worst-case scenario: Magee doesn't score 18+ goals, Hurtado doesn't adjust to his new surroundings, and the lack of a deadly striker hurts the confidence of the entire team. An attempt to sign Chicharito is laughed off, and Johnson conjures up a stoppage time own goal for the ages to lose a crucial match. The Fire end up in 8th or 9th.

Is this a team D.C. United can finish above? Certainly United can end up ahead of the Fire, but as of today it looks like Chicago has a bit of a head start thanks to their stronger overall depth. To keep it brief, "Did DC finish ahead of Chicago?" and "Did DC make the playoffs?" are probably questions with the same answer.