B&RU's Eastern Conference preview ends with a look at what has been for years the conference's running joke: Toronto FC. However, some new front office figures made some enormous offseason moves, including the best current USMNT player in Michael Bradley as well as Jermaine Defoe. TFC in the playoffs? If not now, then when?

What happened in 2013: Toronto FC started poorly, improved to middling, and then went back to being terrible. Their season divides into fairly neat thirds:

They also crashed out of the Voyageurs Cup after losing 6-0 in the second leg at Montreal, ending their strange stranglehold on the Canadian place in the CONCACAF Champions League.

In the process, they made some strange moves. Luis Silva was traded here, presumably in exchange for Ben Olsen buying Ryan Nelsen one Saltena and one Jamaican Style at Julia's Empanadas on Toronto's next trip to DC (I know this bugs TFC fans, but in Nelsen's defense those are good empanadas). The Reds made a major effort to sign Maximiliano Urruti, only to trade him away after two substitute appearances. Urruti was deemed good enough to start games for the Portland Timbers, a team that finished 2013 with nearly double TFC's total. It was one of those years for TFC, which is to say it was a representative season for TFC's entire history.

That's a lot of information to digest. It makes the whirlwind offseason United had staid. TFC fans are used to losing and the offseason churn that comes with it, but they are not used to signings like these. Even without the three Brazil-bound guys headlining the additions group, an offseason with Gilberto, Morrow, Jackson, and Orr - not to mention the return of prodigal son De Ro, regardless of his current ability - would have been a positive in Toronto. They're signings with some sort of plan in mind. Some of them are young and have more of their careers ahead of them than behind them. Problem postions were addressed. It made sense.

You can't just toss out those big names, though, because they tell the real story here. It's not just that TFC is spending their way out of trouble; any Tim Leiweke-run team is going to to that in MLS. The news is the category of player we're talking about: Bradley, the current holder of the title of Best American Soccer Player (male category), approaching his prime. Defoe, who is still in line to make the England squad despite (the horror!) playing in "the MLS," whatever that is. Julio Cesar, who despite showing his age in recent seasons is still first-choice for Brazil.

Each of these moves would potentially change the culture around BMO Field, especially Bradley. Done in one offseason, they point to a whole new era for TFC. Gone are the days where losing to Toronto FC was an embarrassing disaster or a strange fluke that needed explaining. Also gone? The idea that TFC fans simply didn't want to be humiliated, because generally TFC didn't just lose; they lost in appalling fashion. From this point forward, the expectations are that this club will succeed regardless of circumstance.

Still, some things haven't changed. Nelsen will play an old-fashioned English-style 442. The back four, despite the new faces at both outside back spots, looks questionable. Orr may or may not be an improvement over Eckersley; his appearance record indicates more of a journeyman/back-up (87 appearances since 2010; TFC is his fifth club in that timeframe). Doneil Henry is still a starter despite not really progressing much since signing his Homegrown deal back in 2010. Steven Caldwell was solid enough when the players around him weren't making colossal errors, but "solid enough" only takes you so far when surrounded by question marks. Morrow at left back, at least, should be a clear upgrade.

Bradley's role in the midfield isn't actually the best one for him, as he'll be the deeper of the central duo. In this formation and with the other options it's where he has to play, but it will restrict him a bit from joining the attack and creating danger like he does with the national team. Instead, he'll be collecting the ball off the defenders and setting the tempo, as well as doing his normal work winning tackles and clogging passing lanes. Partnering him is Jonathan Osorio, who is a TFC academy product but is not a Homegrown player. He still looks like the jewel of the club's youth set-up, however, and scored 5 goals from midfield last year despite being on an awful team.

On the wings, Jackson should take over on the right side. He plateaued in 2012 and regressed in 2013, but he's still better than anyone the Reds had available in that spot last season. The change of scenery might do him good, since the last time he was seen in Dallas he was trying to fight teammate David Ferreira on the field.

The left side looks more dicey; Alvaro Rey was hit-or-miss in his half-season last year, and he's pretty much the only option there. Nelsen could opt to play Osorio on the left and bring Jeremy Hall or Kyle Bekker into central midfield, or he could roll with Homegrown signing Manny Aparicio, but neither is an ideal move. In the event of an injury to Rey, they may already have to play Morrow as a midfielder and bring Ashtone Morgan - who was as vulnerable as ever at left back last season - into a starting role. Jackson could also end up on the left, but then that leaves TFC with the same problem on the right.

In the attack, the hope is that Gilberto settles in better than MLS's last young Brazilian striker (Rafael Gladiador, you'll sadly recall) did. There's reason to be optimistic about that, as Gilberto was actually starting and scoring for Portuguesa, who were a mid-table team in Brazil's Serie A last season. It's also worth your time to look up who their coach was.

If that happens, Gilberto and Defoe will be such a good scoring duo that the lack of depth elsewhere won't matter much. Defoe's speed and movement should guarantee that he'll terrorize defenders as long as he avoids injury. If he does get hurt regularly, though, there could be trouble. De Ro was flat-out not good for United last season, and he'd be in line to start if the Reds had a game this weekend due to Defoe nursing a hamstring strain picked up with Tottenham Hotspur. Bright Dike will miss most of the season with a torn Achilles, so the only other options are Andrew Wiedeman - a guy who by all rights should be on an NASL or USL-PRO roster - and Homegrown signing Jordan Hamilton, who is a 17 year old rookie. 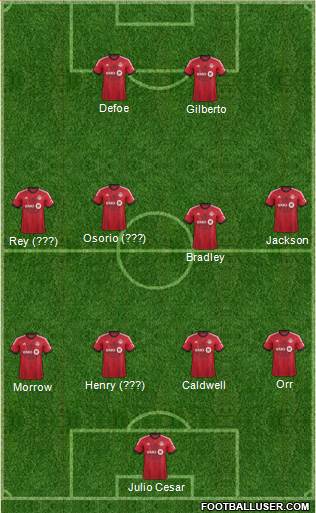 Best-case scenario: The team stays remarkably healthy, Defoe and Gilberto have no trouble sorting out their roles, the young kids all do well, and Nelsen's extremely simple tactics let the stars shine (like Mike Petke with NYRB). TFC ends up pushing Sporting for 1st in the East, and TFC hosts a playoff game. I hear Canada is lovely in November.

Worst-case scenario: The strike pairing keeps making redundant runs until Defoe gets hurt, at which point the goals completely dry up. The suspicions about Julio Cesar's loss of quickness are accurate. Bradley, Osorio, and Morrow do their best, but you can't win games 3v11. Nelsen's tactics are repeatedly abused because it's not 1994 any more. TFC misses the playoffs again, everyone gets fired, and Bradley's agent quietly puts out feelers for a return to Serie A or the Bundesliga.

Is this a team D.C. United can finish above? Only if the fates really have it in for TFC. Tactics don't end up mattering that much if your forwards simply tear teams apart - it's worked in LA with Keane and Donovan - and Bradley should be the single best player in MLS. TFC should be fun to watch, because they're too good to be grinding out games and too flawed to keep teams scoreless. Unless things go terribly in Toronto, the Reds will probably take up a playoff spot, which further narrows the window in which United can squeak in.