In the penultimate B&RU Eastern Conference preview, we take a look at the defending champs. Sporting Kansas City didn't add any big names, but in keeping the band together and content they probably had a good offseason nonetheless. Can they improve on an MLS Cup-winning season?

What happened in 2013: Aside from a couple of poor stretches - a 2W-3D-4L spell a quarter of the way through the season, and losing four of five in late July/early August - Sporting Kansas City kept racking up low-scoring wins. Their best-in-MLS defense was the platform for a successful season even as Peter Vermes couldn't settle on a full-time striker while also needing most of the season to get the best out of Benny Feilhaber. Their stretch run was typical: KC gave up just four goals in their final eight games, going 6W-1D-1L in the process. In the midst of all this, they also advanced to the knockout round in the CONCACAF Champions League.

In the playoffs, they needed a goal by Seth Sinovic - basically the least likely scorer on the field for them other than goalkeeper Jimmy Nielsen - to force overtime against the Revolution before Claudio Bieler scored a series-winning goal. They came back again against their longtime nemesis Houston to win 2-1 on aggregate and advance to MLS Cup, which they hosted. They'd come back one more time in the final, with Collin's 76th minute goal sending the game to overtime and, eventually, penalty kicks. The longest tiebreaker in MLS history followed, with ten penalties needed to separate the teams. Unsurprisingly, it was Collin who scored the winning shot, and KC added a second star to their jersey after winning their first back in 2000.

The defending champs did not have a busy offseason on paper, but keeping the band together was still hard work. Chance Myers was out of contract and seriously considered pursuing a move to Europe, but the Sporks found a way to retain him without breaking their cap. Aurelien Collin made noises about a move back to Europe as well, but he's still in the fold and appears to be happy. Matt Besler, meanwhile, has been named the new club captain.

The only departure from any player that regularly figured into their gameday squad is Nielsen, who retired and is now the head coach of Oklahoma Energy FC, an expansion team in USL-PRO. Peter Vermes had been planning for this eventuality, however, and has confidence in former backup Eric Kronberg. To maintain depth, however, he snapped up Andy Gruenebaum, who was first-choice for the Columbus Crew for a couple years. Kronberg has been named the #1 to start the season, but one suspects the gap is very narrow. In CCL and Open Cup play, Kronberg looks like the more agile and physically strong keeper, while Gruenebaum is taller and has (significantly) more experience in terms of pro starts.

Elsewhere, little has changed. Vermes will continue to cycle between Dom Dwyer and Bieler at center forward, but CJ Sapong may make some appearances there as well after Teal Bunbury was traded to New England. KC's need for Sapong on the wing has been reduced by Soony Saad's effectiveness in spot starts as well as the acquisition of Zizzo, who provides real width for a team that needs it from someone other than a fullback.

In the midfield, we'll likely see the trio of Feilhaber, Oriol Rosell, and Paulo Nagamura more than other combinations. However, there will definitely be a rotation throughout the season. Bieler has played significant minutes in Feilhaber's role as the most attacking of the central midfielders, while Lawrence Olum offers a respectable back-up to Rosell. Mikey Lopez was barely heard from at all last season, but will have to step up due to Nagamura's injury history and a scary situation involving Peterson Joseph. The Haitian midfielder collapsed twice after training last season, and a battery of medical tests has failed to reveal the problem. As of now, he can't even practice, leaving the Sporks one midfielder short unless Lopez (or perhaps Christian Duke) can step up.

The World Cup might see some absences in the form of Zusi and Besler, but KC is very deep. Ike Opara ended up starting nearly half of Sporting's games last season and did well at center back, while Zizzo is getting rave reviews for his ability to score goals while also providing real width down the right. Almost as much as anything else they do, KC's best-in-MLS depth is what keeps them picking up points.

Sporting will still emphasize unrelenting pressure and a sound defense as a platform to rack up 1-0 and 2-1 wins. I mean, given that they have MLS Cup in their hands, and given that Vermes finds hard tackling and rule-bending physical play to be the height of entertaining soccer, why would they change? The Sporks are a buzzsaw, and they'll remain a buzzsaw until teams solve the problems they pose. 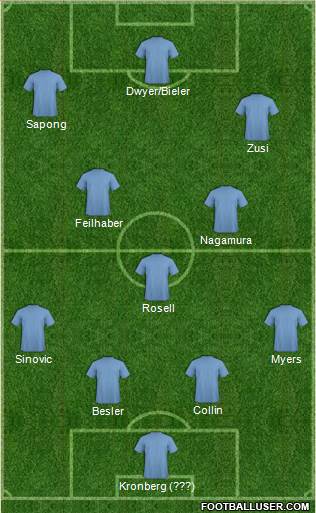 Best-case scenario: KC wins the East by 6-8 points and takes the Supporters Shield, and defends their MLS Cup title (this time with goals by starting forwards rather than having Collin be their leading playoff scorer). Yes, they are a legitimate contender to repeat and build on that by doing the double.

Worst-case scenario: I can't imagine them finishing any lower in the East than 2nd, but I can imagine their quickness to revert to "lump ball into box, hope for the best" as a strategy causing them to crash out in the quarterfinals.

Is this a team D.C. United can finish above? Almost certainly not. Unless every single move we made pans out while KC undergoes a crippling series of injuries, it just isn't happening. United's goal when it comes to KC should be to finally figure out how to avoid the customary 1-0 defeat against the Sporks, and maybe even get a win over them for the first time since the Gilded Age.