Our look around the teams of the Eastern Conference moves on to the Philadelphia Union, who are substantially changed after escaping salary cap purgatory. Some expensive midfield additions addressed an obvious problem, but did it come at the cost of their previously solid defense?

What happened in 2013: The Philadelphia Union were quietly pretty tough to beat to start the 2013 season. Through their first 17 games, they only lost 5 times. With MLS's tight standings, their 7W-5D-5L start to the season constitutes strong form, and makes D.C. United's 2-0 Open Cup win in June bizarre from their perspective as well as from our own.

After more or less keeping that form through July, the Union went through a five-game winless streak that more or less did them in. From August 17th through September 14th, Philly played five games but scored just one goal. Their defense deserved credit for making sure they still picked up a couple of 0-0 draws, but it was a sign of what was to come down the stretch. The clouds briefly cleared with 1-0 wins at Kansas City and at PPL Park over TFC, but the Union blew it down the stretch. A 1-1 draw at RFK was followed by a 2-1 loss in Montreal after the Union had taken the lead. Holding onto that result would have made all the difference; in the end, the Impact finished 3 points clear of Philadelphia in 5th place.

The Union were a busy team in the offseason, as pointed out by our friends at the Brotherly Game. That was by design, as John Hackworth and the Union front office spent two whole seasons making moves to clean up the salary cap disaster left behind by Peter Nowak. In fact, the final step of that process actually involved United: Trading Parke for White was necessary not just to move to the top of the allocation ranking - grumble - but to clear the final bit of salary cap space needed to land Edu.

Edu isn't alone, either. The Union went on a $1 million plus spending spree to upgrade their midfield when you factor salaries and transfer fees in. Edu is the big name, but longtime Sochaux midfielder Nogueira and Argentine playmaker Maidana were costly additions as well.

It's not a bad philosophy. Last year's Union side rode Jack McInerney's hot early-season form to results in the spring and summer, and later relied on their sturdy defense to grind games out. The problem all along was that their midfield never enabled them to control games or create chances regularly. When McInerney stopped putting every shot he took into the back of the net, the results dried up. While one of Hackworth's biggest challenges is getting Jack Mac back to basics, another solution to their offensive woes could simply be to create many more chances.

On paper, the rebuild looks good, but a lot hinges on Nogueira and Maidana succeeding. The book on the Frenchman is that he's a versatile, high-energy player; the Union appears set to give him a central attacking role, but he shouldn't be mistaken for a #10. However, Hackworth's tendency to tinker means we'll probably see him play a "right midfield" role similar to what Davy Arnaud looks set to play in United's 4132 from time to time. In any case, Nogueira was a longtime Ligue 1 starter with Sochaux, which means he can definitely play. Can he play in MLS, though? At 5'6", he may find himself pushed around unless he's got the kind of strength and balance we see from Osvaldo Alonso or Dax McCarty.

Maidana, meanwhile, is more the playmaker type, even if he'll nominally take up a spot as a left winger. He can play centrally, however, and it wouldn't surprise me to see Hackworth move him inside if, for example, Brian Carroll - who was attached to trade rumors in the offseason - is seen as the weak link (with Nogueira moving back and Edu becoming the most defensive midfielder). His set pieces have drawn rave reviews thus far, but a resume that contains seven clubs in five countries over eight years is not exactly a stellar sign. Throw in Hackworth's history of preferring busy, fast players over playmakers - just ask Union fans about Roger Torres - and it seems completely reasonable to maintain some skepticism about Maidana.

The midfield depth is decent. Danny Cruz will get plenty of minutes - like I said, Hackworth loves busy - and 2nd year attacking midfielder Leo Fernandes offers some trickery in central midfield. Young Homegrown player Zach Pfeffer has returned from a loan in Germany and should make some appearances, and if he's ever healthy Michael Lahoud will surely get his chance to kick people as he tends to do at defensive midfield. Philly picked Corben Bone up in the Re-Entry Draft, but much to the chagrin of friend of the blog Travis Clark, he probably won't get much time.

The moves in the midfield required trading away Parke, who was the organizer of an otherwise young defense. That role will likely fall to Amobi Okugo, who only has one year of full-time experience at center back. The Union shipped some allocation money to Chicago to bring in Austin Berry, who makes more sense as a partner for him than White. Sheanon Williams is a top-notch right back, but left back is still a problem. Fabinho is enthusiastic about going forward and a good crosser of the ball, but quite vulnerable defensively. Raymon Gaddis started most of the games in the spot in 2013, but Union fans correctly thought Philly needed an upgrade.

In goal, Zac MacMath did improve over the latter half of 2013, but remained among MLS's weakest starting keepers. The Union made a trade with United at the SuperDraft to move up to the top spot and take another GK, Andre Blake. MacMath is the #1 for now, but Blake's raw talent is far higher, and it's not like MacMath draws tons of praise for being a smart keeper. My advice: Don't use a Philly GK on your fantasy team.

Up top, the Union have two good forwards in McInerney and Conor Casey, but precious little depth. Sebastian Le Toux is better as a right winger, and most of Hackworth's many formations involve one central forward rather than a strike pairing. Aside from depth, the issue is how to get the best out of both players, since they struggle as a partnership and Hackworth only wants to play one center forward. McInerney has the higher ceiling, but he also has (by far) the lower floor.

In terms of formation, it's important not to get hung up on the Union line-up because it will not be consistent. Even if the players are the same, Hackworth can't help but tinker, and even when he keeps his hands off the system is to be fairly fluid. There's talk of Philly playing a 433, but last year's alleged Union 433 looked more like an asymmetrical 4132 when it wasn't a straight-out-of-the-box 4231 being falsely called a 433. It could also easily become a 4141 or a flat 442 without changing any starters. 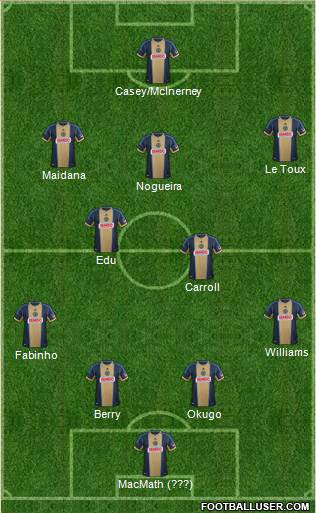 Best-case scenario: Maidana finally finds a home, Nogueira and Edu help the Union consistently boss central midfield, and Jack Mac finds consistent goalscoring form. At the back, the self-made GK controversy pushes MacMath to take the next step, and the Okugo-Berry center back pairing works like a charm. If Philly sees a season like this, they're a contender to win the East (probably coming up just short) despite some questionable coaching.

Worst-case scenario: Maidana shows us why no one ever wants to keep him around, Nogueira gets pushed around, and McInerney continues to over-elaborate and never regains his confidence. Okugo isn't ready to lead a back four, and the keepers hand the starting job back and forth via mistakes all season long. There's too much talent here to finish at the bottom, but 7th or 8th wouldn't shock me at all.

Is this a team D.C. United can finish above? It's certainly possible, particularly if United wins both games in the season series. However, I have the feeling that Edu and Nogueira are going to be a success, and the crossing ability the Union have on the wings suits Casey (and Edu, for that matter) very well. That means Philly unfortunately has a better shot at a playoff spot in my mind than United does. It'll be close, though, and "close" in the East means one lucky win or controversial call.