B&RU's Eastern Conference previews continue with a look at the Red Bulls, who are coming off their first trophy-winning season ever. However, after an offseason that saw them lose several starters, Mike Petke's attempts to repeat will be difficult.

What happened in 2013: Ugh! Basically, it was just gross.

After a start that wasn't much better than ours - people forget that the New York Red Bulls were 2W-2D-4L after eight games - NYRB went on a spectacular run that carried all the way through the regular season. The Metros won 15 of their final 26 games, including seven- and eight-game unbeaten runs. In those 26 games, they only lost twice in the East (bizarrely, to Philadelphia and Columbus, neither of whom made the playoffs) while taking all three points for themselves on twelve occasions.

With the "Not a _______ one!" era over - it's cool, "only" has the same number of syllables as "Not a" - the Red Bulls were understandably being picked for MLS Cup glory. Fortunately the fates did not let them get their grubby cheating hands on that piece of hardware, as they fell 4-3 after extra time to the Houston Dynamo. Remember to politely applaud Metro killer Omar Cummings when Houston comes to town.

The Metros had a lot of turnover this offseason, which is typical for any MLS team with multiple Designated Players on their roster. It's hard to keep your squad together when you have success and everyone that can demands a raise, and the result for Mike Petke's side is losing five guys capable of starting in MLS.

Making cap-enforced moves is nothing new in MLS, but some of NYRB's decisions were odd. Petke consistently turned to Barklage over Kosuke Kimura when given the choice between the two, but in the offseason Kimura - whose cap hit is somewhere around $30,000 more expensive - was retained while Barklage ended up departing to San Jose via the Re-Entry Process. Meanwhile, Holgersson ended the season preferred to both of them at right back, yet was allowed to leave for free and ended up with Wigan Athletic.

Overall, the changes appear to point to a slightly shallower talent pool for Petke to draw from. Most Supporters Shield winners try to tread water at worst, but the Red Bulls appear slightly weaker overall while key players like Thierry Henry and Jamison Olave got a year older.

All that said, the starting eleven is more or less of equal quality. Eckersley will be first-choice at right back, and one assumes the Red Bulls aren't paying him a comical amount like Toronto FC did. He's not quite as smart as Holgersson, but he's probably a step up from Barklage or Kimura, who both started plenty of games last season. On paper, Armando looks like a smart pick-up, but adapting to MLS is always an issue. NYRB won't be broken if Armando ends up being a flop, but Olave's injury history looms over that situation.

Left back is still their weakest spot, and in fact has gotten markedly worse. Carney wasn't anything special, but he was not Roy Miller, who is now first choice (and long may he reign!). Petke has no interest in using Connor Lade anywhere, and Convey's history when used as a left back involves a lot of pouting and very little success. The situation is so dire that I can't safely rule out Petke opting to use Eckersley on the left and Kimura on the right. It's probably not in his plans today, but it's such a glaring weakness that his hand could be forced.

So the back four looks a bit softer, but how about that midfield? Dax McCarty had the best season of his career last year, and there's no reason to believe he will regress in 2014. Jonny Steele will probably hold onto the starting job out on the left, while Lloyd Sam and Eric Alexander will both see lots of minutes on the right (with Sam being the more attacking option).

Centrally, McCarty's partner will probably rotate throughout the year, especially after Tim Cahill scored for fun as a forward while Peguy Luyindula did surprisingly well as a playmaker. Alexander can also shift into a central role. That's a lot of quality and depth, and it doesn't even count Convey, who has seen time centrally in the preseason (though that is highly unlikely to be repeated in league play).

The front line should be dangerous as well, regardless of where Cahill plays. Henry is still more capable of conjuring up something unbelievable than anyone in MLS, and Bradley Wright-Phillips can stretch the field vertically with his speed if Cahill plays in the midfield. There is a depth issue, however, since the drop-off from that trio to Andre Akpan - who is the only depth forward on the Red Bulls roster after Homegrown forward Amando Moreno was signed away for nothing by Club Tijuana - is steep.

Finally, in goal Luis Robles remains a mediocre MLS starter unless you ask Red Bulls fans, who are starting to treat Robles like Chicago Fire fans treat Patrick "BEST WINGER EVAR!!!ONE!" Nyarko. Robles is very agile and quick, but he lacks the size or strength to be good on crosses and his organizing abilities are below average. Such issues are covered when Olave is on the field, but when he's unavailable it becomes clear how much his athleticism papers over these leadership cracks. 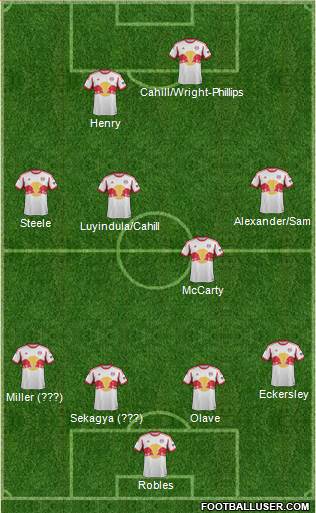 Best-case scenario: Henry and Olave only miss games on turf, Convey doesn't just mope around all season, and the Red Bulls stick to Petke's "keep it simple, stupid" philosophy. The regression in the offseason likely means no Shield repeat - hooray! - but if everything goes right they'll still be an MLS Cup contender.

Worst-case scenario: Henry shows his age, Olave's knees give way, and coaches start exploiting the tactical issues that come from NYRB's simple 442. Without Olave they bleed goals, and without Henry teams are able to contain Cahill. This team is built to be carried by its stars, and the supporting cast will not be able to get the job done if said stars struggle. In this awesome-but-unlikely scenario they'd miss the playoffs.

Is this a team D.C. United can finish above? Yes, but only if things go really well for the Black-and-Red and close to the worst-case scenario above. Despite the continued presence of a starter like double agent Roy Miller and an offseason that saw them get slightly weaker, the fact is that we're talking about last season's best regular season team, and they got worse by 5-6 points, not 20. That said, I do think United has a realistic shot at taking the Atlantic Cup back if Eddie Johnson and Fabian Espindola can be sharp on the break.