Continuing with B&RU's look at the Eastern Conference, we're examining the prospects of the New England Revolution. Jay Heaps did very well with a young team last season, but has some major issues to overcome if he wants them to repeat or improve on 2013.

What happened in 2013: A 2W-4D-4L start appeared to be an indictment of the 4141 the New England Revolution started the season in, but Jay Heaps kept faith in his mostly young charges. It proved to be the right choice, as a stubborn defense was finally melded with a dangerous attack and the Revs won twelve games out of their final twenty. They closed the season on a 4W-2D-0L run, rather surprisingly finding themselves sitting in 3rd place come playoff time.

In those playoffs, New England took a 2-0 lead in the first leg only to give up a critical goal to Aurelien Collin minutes later. Collin struck again in the second leg, but the Revs responded through Dimitry Imbongo with 20 minutes left in the series. Former Rev Seth Sinovic scored after having not done so all season, however, and in overtime Claudio Bieler finally put an end to the Revolution's season.

On one hand, the Revs had a busy offseason. I mean, the key additions/key losses are just the guys that could theoretically play regularly or did so in 2013; it's only about half the list of total transactions in both cases. Jay Heaps has had to replace his second-best player and only truly capable striker in Agudelo as well as a club legend in former starting keeper Reis, and made headlines with a widely-praised draft, the trade to finally pry Bunbury out of the white-knuckle grip of Peter Vermes, and just for kicks he threw in Kobayashi, an undoubtedly talented player who was probably misused in Vancouver.

On the other hand, being busy doesn't mean being loud, and the Revs were kind of quiet throughout the offseason. In fact, the biggest noise from their camp may have been Jose Goncalves grousing about his contract and publicly discussing a desire to return to Europe. Since Goncalves is as valuable to the Revolution as any player in MLS is to his respective team, this is the kind of thing that can torpedo a team for the entire season. Heaps has proven to be a quick study as a head coach in MLS, but this is surely the biggest test of his man-management to date.

Overall, the slew of moves have probably made New England deeper in the midfield, but I can't bring myself to say they got better. In fact, they are probably a lesser team than in 2013 given fact that Agudelo hasn't been adequately replaced.

If you're wondering how I can say that in light of the Bunbury move, it's all about style of play. Agudelo loved to get the ball at his feet and hold play up - not by being a traditional back-to-goal bruiser, but with his skill and creativity - and the Revolution midfield thrived as a result. In a 4141, the lone forward must be able to hold the ball up long enough for the midfield quartet to catch up and make runs. Agudelo allowed that to happen, and what we saw as a result was breakout seasons for Diego Fagundez and Kelyn Rowe, while Saer Sene also racked up goals until breaking his ankle late in the season.

Bunbury is a completely different sort of forward from Agudelo. Where Agudelo wanted to be a creator as much as a scorer, Bunbury wants to be more of a pure #9. Agudelo was more than happy to face away from goal, check back, or make lateral runs. Bunbury only has eyes for goal, so everything with him is about going forward. He wants a steady diet of through balls, not service to feet. Broadly speaking, this is also why Jerry Bengtson has not succeeded in MLS: He's not the right player for this squad.

That stylistic difference means Bunbury might not even be a lock to start. He's unquestionably the most talented candidate to start up top the Revolution roster, but he doesn't compliment the midfield at all. Dimitry Imbongo - the back-to-goal bruiser I referred to above - is a less skilled player and may be MLS's #1 red card risk, but he can hold the ball up, and the Revs are built for that approach.

Speaking of that midfield, it's an impressive enough group to justify choosing a lesser player like Imbongo. Fagundez could end up on the USMNT before too long if he continues to pursue US citizenship, Rowe's ability to burst from the midfield makes him a constant threat in and around the box, and Lee Nguyen's ability to play in tight spaces helps the Revs out when they've otherwise been in too much of a hurry to get forward.

To that group, they've added Neumann, a Georgetown product who will likely serve as the understudy for both Nguyen or Rowe in this system. Mullins will probably see more time on the wing than up front, and with Sene's injury he could be in line for starts straight away. While most observers talked about Mullins as seeing time on the left, Heaps has mostly used him as an inverted right winger in the preseason. Kobayashi, finally, can stand in for Nguyen and may even push him for starts. The Japan international was seen on the right fairly often for Vancouver, but make no mistake: He's a #10, and might do better in this set-up than he did with the Whitecaps.

On the wings, Mullins will battle for time with Imbongo and Davies on the right side while Fagundez spends most of his time on the left. That battle will probably go on until Sene is back fit, which given the serious nature of his injury may be a long time indeed. Neumann and Kobayashi could also get a look out there, but I think Heaps could be tempted to move Rowe to the right and play Neumann or possibly Caldwell alongside Nguyen if no one produces from the right wing.

In between the lines, US fans should be hopeful that Scott Caldwell is the full-time starter rather than in a rotation like in 2013. The Akron product is a more progressive sort of defensive midfielder, capable of playing further up the field and a regular contributor to New England's moves forward. In the playoffs, however, Heaps rolled with Andy Dorman (who, to be fair, came up trumps with some great performances). Look for Caldwell to seize the role despite challenges from Dorman and Paolo DelPiccolo, a 2013 Montreal draft pick who ended up choosing a European offer, never playing, and returning to MLS for this season. I like to think he was doing an homage to MLS draft picks circa 2003.

The back four is more or less unchanged. 2013 draft pick Jossimar Sanchez was brought in on trial and signed with New England, and that's about it for the changes. Goncalves will continue to be the boss at left-center back, and Chris Tierney - despite being vulnerable to speed - will continue at left back as long as he avoids the injury bug.

However, with Kevin Alston apparently at 100% following last season's battle with leukemia and Jamaica fullback O'Brian Woodbine in the fold, there is talk of moving Andrew Farrell to center back. It's an interesting proposition, because despite last year's excellent goals against record the Revs were choosing between AJ Soares and Stephen McCarthy as partners for Goncalves. Neither player is really a standout MLS starter, and in fact they probably wouldn't have started for most other playoff teams in 2013. Heaps surely wants to improve in the middle, but it's going to take someone else making right back their own before he'll risk moving Farrell out of that role.

In goal, Bobby Shuttleworth started for a big chunk of 2013 and looks to be the opening day starter. However, former Rev Brad Knighton was brought back in from Vancouver to challenge for the job. Both players are roughly equal in terms of overall ability, with Shuttleworth possessing a bit more physical strength while Knighton is just a tiny bit quicker. No matter who wins the starting job, the Revs will be fielding a below-average MLS starter and will also need to make up for the lost leadership Reis brought as an organizer. 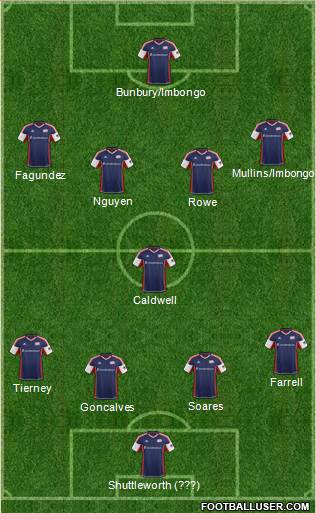 Best-case scenario: Fagundez and Rowe don't have the down year we often see in MLS after a young player breaks out (see: Nick DeLeon), the Revs get better in possession and thus pave the way for Bunbury to be useful for them, everyone stays health, and Goncalves gets over his unhappiness to repeat his 2013. In those circumstances, this is a legitimate MLS Cup contender.

Worst-case scenario: All or most of the youngsters are too satisfied with themselves, Goncalves spends the whole season sulking, Sene's recovery drags out, the GK role is passed back and forth, and no one actually succeeds at striker. The Revs aren't the worst team in MLS, but they do end up well outside the playoff spots.

Is this a team D.C. United can finish above? Given the wide array of potential outcomes for this New England side, yes. The more important question is whether it's likely to happen, and on that count I'd say no. Goncalves seems like the sort of pro who will put aside his contract issues to produce, and the sky is the limit for both Fagundez and Rowe. I'm not sure they'll match last season's team due to the issues up front, but they still look like a playoff team. The good news is that there's probably (a little) room for United to make the playoffs while still finishing behind the Revs.