Next up in B&RU's look at the rest of the Eastern Conference is the Montreal Impact. Despite making the playoffs, Montreal ended up making a coaching change while doing nearly nothing to change their roster. Will it be good enough for them to improve on 2013's inconsistent showing?

What happened in 2013: All soccer fans have heard of a game that's a tale of two halves; in 2013, the Montreal Impact wrote a tale of two half-seasons. At one point, Montreal had won nine of their first fourteen games and were leading the Supporters Shield race; seventeen games through the season their new-at-the-time head coach Marco Schallibaum had the Impact at 9W-4D-4L and looking like a contender.

The wheels started to wobble for a few weeks, and by the end of the season they'd fallen completely off. Montreal's 5W-3D-9L record over the second half of the season was a pace only slightly better than Toronto FC had in 2013, for reference. As time went on, things just got worse, with the Impact losing six of their final eight games (and winning just one).

Nonetheless, the Impact's great start - and Chicago's 5-2 loss to the Red Bulls on the very last day of the season, which also let those losers stop being losers for a second - allowed Montreal to back into the playoffs. To nobody's surprise, they were demolished 3-0 by Houston on Halloween and ended the match with eight men. In other words, a team in free-fall finally thudded into the ground.

On the other hand, they did win the Voyageurs Cup, which took place entirely during their good portion of the season. Hooray bad teams getting into the CONCACAF Champions League!

The Impact basically fell off a cliff as summer turned to autumn last season, and yet their roster has barely been touched. Montreal's ownership clearly decided that it was the coach rather than the players, meaning Schallibaum hit the road. This will likely cut the number of times a coach is ejected in 2014 - Schallibaum really earned his "Swiss Volcano" nickname last year - but it remains to be see just how much of Montreal's problem was coaching.

It's not just the choice to change coaches that inspires some skepticism; it's who was brought in to take the reins. Frank Klopas repeatedly got his Chicago Fire sides to win games...for half a season. The problem for Klopas was that the other half of the season was always a disaster, and the Fire were a) never better than mid-table and b) often on the outside looking in when the playoffs started. Nevertheless, the Impact braintrust decided that the very mixed record Klopas put together with the Fire was what their squad needed.

There are some reasons to think Klopas can make things work, however. Despite usually preferring an at least modestly attacking mindset, his Fire teams were usually at their best playing on the counter and switching the point of attack. Having Hernan Bernardello and Patrice Bernier available as deep-lying distributors reminds me of what Klopas had when Pavel Pardo roamed the Chicago midfield. Incidentally, the 2012 Fire side featuring Pardo was the best Chicago team Klopas put together.

In terms of selection, the 4231 the Impact often played last season will probably return. The Impact couldn't really score with it last year, but the extra midfielder helped them shield what was otherwise a pretty shoddy defense. That means Marco Di Vaio playing alone up front once his three-game suspension - carried over from last year's playoffs - ends. It also means that the Impact will lack a target man, which will increase the pressure on the midfield to string passes together while looking for the chance to put Di Vaio's masterful running of the channels to good use.

The depth, however, isn't there up front. Andrew Wenger was drafted before Nick DeLeon to be a striker, yet he's managed just 5 goals in 47 career appearances. 21 year old Uruguayan Santiago Gonzalez was added via "special discovery," whatever that means, but it seems unlikely that a 5'8" second forward/winger hybrid will come to MLS at 21 and provide the number of goals the Impact need from guys not named Di Vaio.

In the midfield, Justin Mapp had easily the best season of his career in 2013 as an inverted right winger. Klopas is probably not going to change that - he shouldn't, anyway - but he still has issues with production elsewhere. The left wing options are either tricky (Gonzalez or Andres Romero) or speedy (Sanna Nyassi or Blake Smith), but the latter three are flawed and Gonzalez would have to hit the ground running in MLS. Most likely, Klopas will never settle on a starter because none of his options aside from Mapp ever force him to.

Between them will be Felipe, and the little Brazilian probably needs to be at his very best all season. The lack of firepower elsewhere on the field for Montreal will put a lot of weight on his shoulders, and compounding matters for Montreal is that they have no second-choice attacking midfielder available. Di Vaio actually had to play that role several times in 2012, but no one in their right mind would move the only goalscorer on the roster further away from goal. If Felipe can't get the job done, Montreal will either have to play Bernier up there - which he wouldn't be comfortable with at all - or change formations to a 442 or a 4141.

The engine room should be Bernardello and Bernier, but there's an issue there too. Namely, both players want to do more or less the same thing, and it's very difficult to fit two players this similar together in defensive midfield. Both would be better off with a hard-running destroyer, and when paired in 2013 they both seemed confused. Usually Schallibaum ended up giving Bernardello in the deep role, but the Impact never actually played better than the early portion of the season before Bernardello was signed and that role went to Bernier.

If these two do sort out the responsibilities and balance in midfield, the Impact could be electric going forward.If not, however, they'll really struggle to shield their defense and also suffer from having too many chefs in the kitchen when it comes to possession. Oh, and there's not really much in the way of depth; Collen Warner is more or less the entire list.

The defense, now that Nesta has retired, needs sorting. Matteo Ferrari will definitely start centrally, and Jeb Brovsky will be at left back when fit. Hassoun Camara will also start, but as a center back he can be rash and as a right back he isn't quite skillful enough coming forward. The fourth defender could end up being Nelson Rivas, Wandrille Lefevre, Karl Ouimette, or Generation Adidas draft pick Miller. Either way, Montreal appears to have regressed despite being one of MLS's worst defenses in 2013. Troy Perkins is going to be busy. 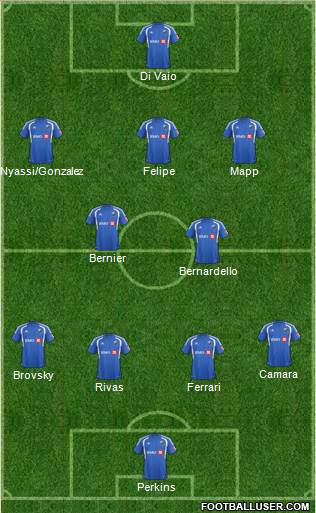 Best-case scenario: Di Vaio contends for the Golden Boot again, Felipe plays his very best, Mapp repeats his 2013, and the Serie A backgrounds of Ferrari and Rivas finally show through. Bernardello and Bernier sort their roles out, and Klopas finally avoids seeing his system stop working halfway through a season. Even if all this happens, I can't see the Impact doing better than third.

Worst-case scenario: Di Vaio has the sort of season De Ro did with United in 2013, while Mapp reverts to his past indifference and Felipe joins him. Bernardello and Bernier continue being a confused pairing, and the back four concedes even more goals than in 2013. Montreal finishes 19th out of 19 teams in MLS.

Is this a team D.C. United can finish above? They really, really should. There are too many flaws on this roster and too much riding on a man who will be 38 come July for the Impact to repeat as a playoff side. It's hard to imagine them improving given they made so few additions while also letting an old roster get older.