The Houston Dynamo are up next in B&RU's look around the Eastern Conference. Dominic Kinnear has assembled the same sort of roster as in past years, but the strengths and weaknesses have shifted to different points on the field. Could this be a down year for the Dynamo?

What happened in 2013: Whiplash, basically. The Houston Dynamo could never get their act together and go on a real run. They were winless in June, but took seven points from nine in July. In one week in August, they beat Seattle 3-1 but also lost 5-0 to the Montreal Impact. They lost twice to a mediocre FC Dallas - giving up three goals in both matches - and both of their games with lowly Toronto FC ended in draws. If not for their ability to batter and humiliate D.C. United every time out, Houston would have missed the playoffs in what was a soft Eastern Conference last season.

And yet, there they were again within spitting distance of MLS Cup, holding a lead in the second leg of the Eastern Conference final before the Sporks came back to finally vanquish the team that had previously tormented them. Still, Dominic Kinnear's ability to survive and advance - often with the lesser roster - means that the Dynamo are always a threat.

Things haven't really changed for Houston. Kinnear decided Boswell was too expensive, so he went out and got Horst. Carr's role was taken by Omar Cummings and his unexpected return to form. Sherrod is a cheap young replacement for Weaver as a battering ram sort of striker. The way the roster is constructed is nearly identical. Only adding Cascio - a fourth quality option on the wings to go with Brad Davis, Oscar Boniek Garcia, and Andrew Driver - rates as changing Kinnear's options.

However, there's a difference between keeping a roster with the same style of player year to year and keeping a roster with the same quality of player. Boswell looked a bit lacking in agility last season, but he's still a substantial step above Horst in terms of overall ability. Horst isn't the only option to fill Boswell's shoes, but his competition (Eric Brunner) struggled badly in the playoffs and whenever faced with high-level competition. Both players are the sort of option you want as your third- or fourth-best center back, not as a starter.

Given that Kinnear's teams are based more than most on a solid defensive foundation, this is a significant problem to have. Letting Boswell go only made sense for the Dynamo if they could upgrade; instead, they're simply filling in with someone further down the roster. Despite having an excellent pair of outside backs, a strong goalkeeper in Tally Hall, and a very effective defensive midfielder in Ricardo Clark, Houston is going to give up more goals - and critically, the sort of soft goals that kill confidence - than they normally do.

That doesn't necessarily mean they'll be worse though. Davis and Garcia are both potential Best 11 midfielders, and Giles Barnes has a mix of creativity, speed, and strength that you don't see much in MLS. Cascio has been scoring for fun throughout the preseason, which makes sense given that his role with the Dynamo suits him more than the job the Colorado Rapids gave him. Will Bruin has not made the continued progress his rookie season promised, but even with simply adequate form he should be able to score 10-12 goals given who surrounds him.

None of that even touches on Cummings, who ended a three year run of bad form just as Houston needed a goalscorer in the playoffs. If he can bring that form over to 2014, the Dynamo could see five players combine for 30-35 goals. More importantly, the number of options will prevent teams from doubling Davis or Garcia on the ball, which means Houston's best attacking players will have more time and space. That doesn't even factor in Alexander Lopez, who was formerly the next big thing in Honduran soccer before he came to MLS and found himself in a league that doesn't really allow you to play the killer ball every time you turn upfield. If Kinnear can get Lopez on track, the Dynamo will be dy-no-mite. Sorry, I couldn't resist. I'll pack my things and go.

The Dynamo have pretty excellent midfield depth. Servando Carrasco could start on another team, and could yet push Kinnear into pushing Clark up as a forward destroyer in a different approach for their 4132. Cascio's competition to be the third-choice winger is Andrew Driver, whose very British approach to wing play forces outside backs to constantly defend 1v1 successfully.

Those options make the Dynamo hard to predict in terms of their best 11. The 4132 is likely to be their base formation, but Kinnear has used both Garcia and Davis as a central midfielder rather than in the wing role both of them are better suited for. Cascio's success in the preseason might see him get an opening day start on the right - meaning Garcia will be in the middle and Davis on the left - but don't be surprised to see Garcia on the right, or even Barnes pulled back into the attacking midfield role with Cummings partnering Bruin. This is a very flexible front five, and Kinnear has the luxury to rotate to keep everyone fresh as well as the freedom to tailor lineups for a given opponent. 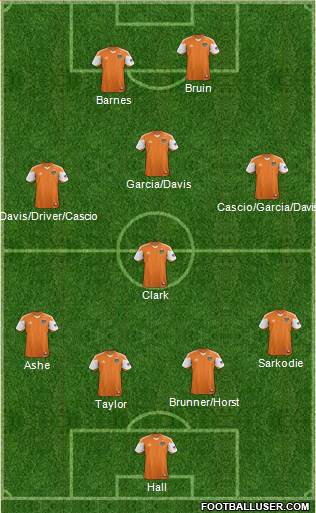 Best-case scenario: Bruin finally takes the next step and hits a career high in goalscoring, while Barnes chips in 8-10 and a bunch of other guys get to 5. Brunner (or Horst) proves to be a starter, and the Dynamo actually make the playoffs comfortably rather than finishing 4th or 5th via a win on the last day of the season. In this scenario, the Dynamo are definitely an MLS Cup contender.

Worst-case scenario: Bruin has a few multi-game scoreless streaks, Cascio and Driver fail to adequately step in for Davis and Garcia when needed, and only Barnes really chips in to replace the lower-than-expected goal production. At the other end, teams repeatedly take advantage of the soft central defense, which in turn means a Dynamo side that struggles to get leads on a regular basis. The Dynamo finish 7th or 8th.

Is this a team D.C. United can finish above? If both teams play their very best, probably not. Houston is deeper and more dangerous going forward. However, we've seen what a weak CB pairing can do to undermine a team, and the Dynamo could find themselves turning into that sort of team. In other words, the range of points Houston could end up with seems wider than United's, and that opens the door for Olsen's Army to finish ahead of the Orange Crush for the first time since winning the Supporters Shield in 2007. It will require a slice of luck, but just a slice rather than a constant series of miracles.