D.C. United Attendance: A Postscript on 2013

All the conditions were in place for D.C. United to have better home attendance in 2013. Then the terrible, horrible, no good, very bad season started.

Share All sharing options for: D.C. United Attendance: A Postscript on 2013

[Standing up at a support group session for D.C. United fans, it's my turn to confess.] "I'm a big D.C. United fan, and I was an optimist heading into 2013. I expected the team would contend for the Supporters' Shield, make a deep run at the MLS Cup, and significantly improve attendance at RFK Stadium. I was wrong, and I apologize." [Sitting down, I accept the heartfelt support of my fellow Black-and-Red fans put on my imaginary armor to absorb the well-deserved barbs heading my way.]

We've discussed what went wrong on the field this season extensively here on Black and Red United (and we must acknowledge the team's improbable yet extraordinarily entertaining US Open Cup championship), so let's now break down what happened at the turnstile in 2013. It should go without saying that this isn't an indictment of the fans that actually showed up at RFK on a regular basis this year. Like the world's greatest bantamweight fighter, D.C. United fans are pound-for-pound the best in MLS. Unfortunately, too many fans stayed away in 2013--but why?

As a quick reminder, I set an over/under on average attendance in 2013 of 16,000 (and I took the over). This looks laughable now that we know D.C. United's average attendance came in at 13,646 for the season. But, back in the preseason, things looked so promising with a winning team that made a deep run in the playoffs during 2012, attendance momentum at the end of 2012, a more favorable schedule in 2013 for attendance, and a stated team goal of having four sellouts in 2013. In the end, however, none of those factors mattered based on how the season unfolded.

1. So, how did D.C. United attendance in 2013 compare to attendance in 2012? And how did it compare to the overall league average for those two years? Well, basically it was a wash. On average, exactly 200 less fans showed up each game at RFK this season than last season. That very slight reduction was almost identical to MLS's overall attendance reduction of 213 fans per game during 2012 (see table below).

3. While D.C. United's average attendance in 2013 was down slightly compared to 2012, a more serious attendance concern is being masked by the more favorable schedule the team had in 2013. As shown in the table below, the team had more Saturday home games and fewer Wednesday games in 2013 than in 2012. This season, using the more favorable "day of the week" profile their 2013 season afforded, the Black-and-Red would have increased attendance by more than 5% (for a total of 14,574) if they had just equaled the averages for each day of the week from 2012. This would have occurred because of the increased number of Saturday games (the day on which historically the best crowds turn out) and the decreased number of Wednesday games (when historically the lowest crowds turn out).

4. So, why was attendance so poor in 2013? I don't think it was weather (which was mostly very good throughout the season, with rain only being a factor on a few occasions), and the impact of the Washington Nationals was likely less than last year due to their middling performance in 2013. Anecdotally, there may have been fewer discounts on tickets this year with LivingSocial no longer being a team sponsor, but in general ticket prices in 2013 were about what they were in 2012. For me, then, that leaves the most likely explanation as the team's alarmingly bad record that developed early in the season (I appeal to Occam and his razor).

Without polling data of why fans stayed away as the season progressed, we have to make educated guesses based on the crowds that did show up. In line with the theory that the team's record kept fans away, two of top three home crowds of the season were in the first three home games (against Real Salt Lake and against the New York Red Bulls). The third best attended game of 2013 was the match against the LA Galaxy on Sep. 15th. As we've discussed before, the Galaxy have their own unique attendance dynamics given their league-leading star power, but even the reasonably good crowd of 16,233 this season was almost 10,000 less than showed up to see D.C. United play the David Beckham-led Galaxy in 2011 when they last played at RFK (if 26,622 had showed up this season to watch D.C. play LA, United's season attendance average would have increased by 611 per game).

With the exception of those three games, attendance was flatlined all year long with seemingly no factor (e.g. rivalry games, interesting opponents, time of year, special deals, etc...) able to move the attendance needle.

5. After their fifth home game of 2013, D.C. United had essentially reached their season attendance average, and it didn't waiver the rest of the year. The table below charts the average home attendance following each home game of the season. From the fifth through the final game of 2013, the average attendance floated in a very tight window between 13,577 and 13,802, finally settling on the overall season average of 13,646. 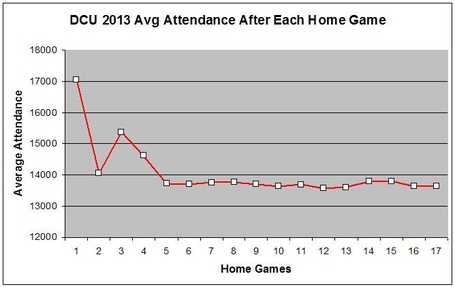 What will happen in 2014? I once heard someone say that the statistically most accurate way to forecast the weather is just to predict that tomorrow's weather will be exactly like today's. I don't know if that's true, but I'll follow that line of thinking by saying attendance at RFK next year will probably be somewhere in the 13,000s. I can't imagine next season will be as bad on the field as this year's (but who could have predicted how bad the record was this year?), but I also don't know what dynamics could significantly improve attendance at this point short of moving into the new stadium on Buzzard Point.

Which also has me thinking: With attendance so bad right now for D.C. United, why do we all seem so optimistic about attendance in a new stadium? I truly am confident about the impact the Buzzard Point stadium will have on attendance, and I expect it to be sold out after it opens. Maybe my optimism is based on the big crowds that still show up for meaningful games at RFK Stadium (witness the end of 2012), maybe it's based on D.C. United's history as the most decorated team in MLS history and the team that had reliably big crowds when MLS was struggling for its very survival in the early-to-mid 2000s, or maybe it's the way that crumbling hulk of a 1960s-era multi-purpose stadium can still be transformed into the heart and soul of American soccer when the US National Team shows up to play.

Whatever it is, I still believe the latent potential for regular big soccer crowds exists in Washington, DC. But, will that confidence still be there if Buzzard Point doesn't open on time, or, banish the thought, if it falls through altogether? The next few months will be telling for D.C. United's future on Buzzard Point.