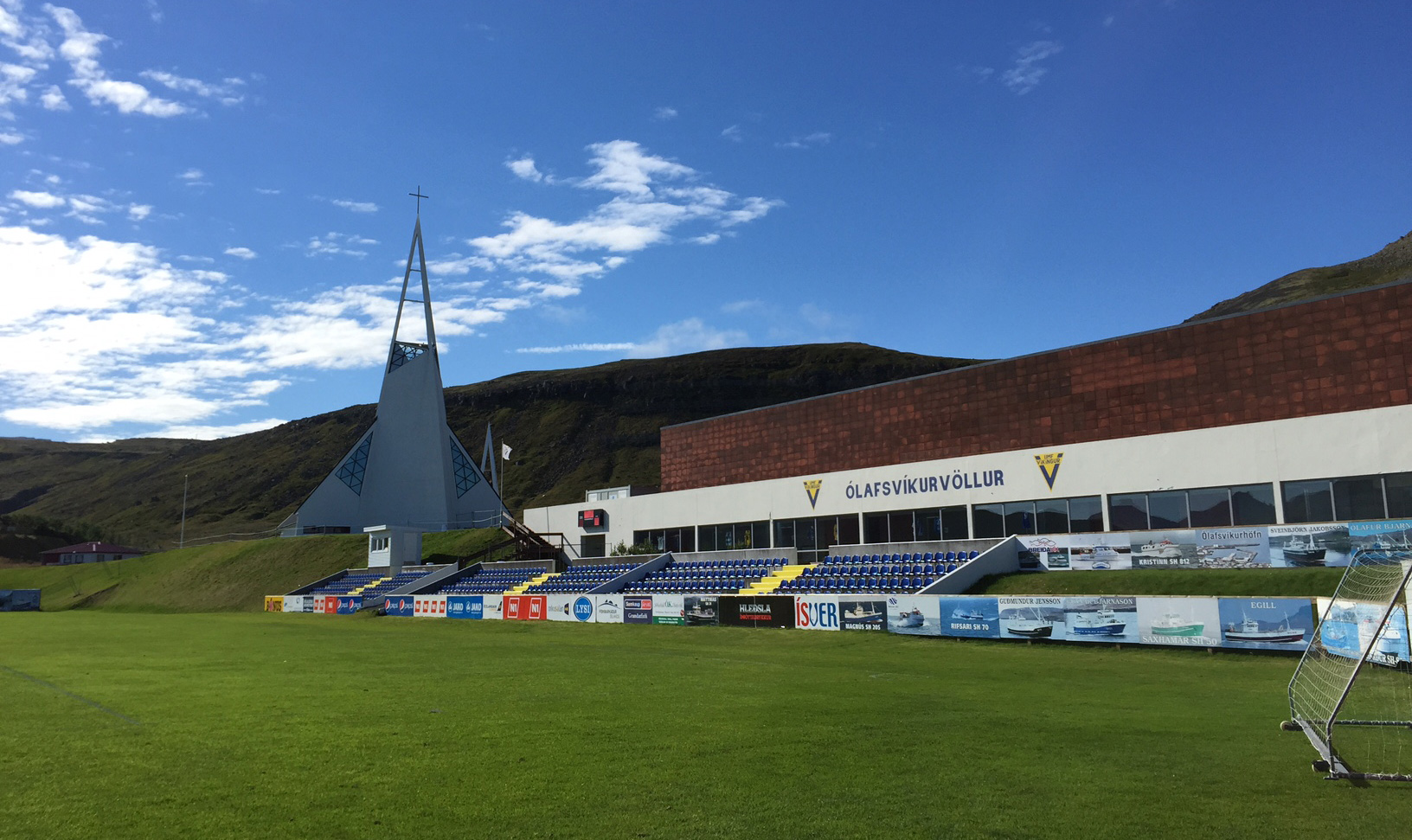 Recently, I spent a couple weeks in Iceland, so this is a small Field Trip Report on football in the country. Far from the familiar comforts of engaging with my favorite brands, I had the chance to forge some new relevant connections. (Primarily Mjólkursamsalan's delicious próteindrykkir product.)

I went in mid-August, so the remnants of the national team's big tournament at Euro 2016 were still easily found. In Reykjavik, photo cutouts were found downtown along with giant decals of the players on a local hamburger restaurant chain. (Humorously or disturbingly, depending on your perspective, if the windows were opened, the player's face would open along with it.) Assorted Euro 2016 merchandise was scattered throughout the country and national team shirts were readily available.

A sidebar about the football system -- there is a 12-team top division (Icelandic Premier League) and several other steps on their pyramid. Similar to MLS (influenced by weather reasons), the season runs from May to September. The vast majority of the teams in the top flight are in the capital region, but this mirrors the general population distribution. There's also a team that plays on an island off the country's south coast. If I'm to understand it correctly, the general level of things is semi-pro and the league itself is ranked 35th in UEFA. Despite the narrative for the mens' national team, all of the players in the big tournament were generally playing for respectable sides, including several Europa League participants. Beating England was more a function of an overrated team coming up against a solid group who could execute a gameplan well. That pundits acted like it was the Faroe Islands beating England is ignoring the quality on the Icelandic team.

Due to schedule, I wasn't able to attend a match proper, but I did stop by a couple of the fields. In Reykjavik was the national stadium, Laugardalsvöllur. It was nice on its own, but the other two were positively picturesque -- the home of Icelandic Premier League's Víkingur Ólafsvík in Ólafsvík (complete with sponsor boards for local fishing boats) and a small local field I'm having a bit of trouble identifying (Reynisvöllur?) in Hellissandur. It was pleasant, if a bit jarring for an American, to just be able to walk in through open gates and take pictures. It also was nice to see that local children had felt comfortable in leaving some of their gear, knowing it would be there when they came to play the next day.

During the buildup to Euro 2016 and the tournament itself, there were numerous mentions of the national association's efforts to bolster football's infrastructure in the country. Beyond the coaching and indoor facilities, this was also manifested in small-sided courts found in many of the cities and towns. This is one that I spotted in Hella. (I've also seen similar-ish courts in Berlin, Germany, so clearly not the only country with this sort of thing.) A durable, readily available playing environment is the sort of thing that USSF should consider doing, but I fear that with the need of property acquisition (etc.), it would be impossible. That's not to mention the reality that it would likely be vandalized and trashed within a month if there was no upkeep.

Judging by their warmups and jerseys, it seemed many boys and girls were involved with the football teams of their local sporting associations. (The "league" teams are all fielded by a local multi-sport association, as I understand it.) Actually, it seemed as though soccer was even more popular among the girls, perhaps not surprising, as the Icelandic women's team made their UEFA Euro debut in 2009 where the men debuted in 2016.

Despite being very, very difficult to find, I even managed to acquire a new jersey for my collection -- here's the shirt of Icelandic First Division stalwarts Þór (Thor!) of Akureyri.