There's no one else that has shot up the 2011 MLS Draft Big Board faster than Ecuadorean forward Joao Plata. He may be only 18 years old, and he may not be much taller than 5'-0", but Plata sure knows how to score. He's got three goals so far at the MLS Combine, including one goal where he quickly cuts in from the left and shooting through a crowd of defenders just inside the post. Sort of reminds me of the goal that Andy Najar scored against the Houston Dynamo last year.

Obviously Plata's height is the biggest factor that could keep him from going high in the draft. Two MLSsoccer.com writers have the phenom going in the top five, but it seems also just as likely that he will drop out of the first round. This is another high-risk high-reward type pick, similar to Omar Salgado. But unlike Salgado, Plata looks like he could contribute right away as a goal-scorer off the bench.

Comparisons to Franco Niell seem unfounded. Not every short player sucks. Not every tall player is good. Scoring three goals in two matches at the Combine indicates to me that at the very least, Plata could tear up the MLS Reserve Division and earn time as a substitution.

But is that enough to make him the No. 3 overall pick? Probably not. He can score, but his goal-scoring seems like more of a gimmick. I would worry that D.C. United wouldn't get much else out of him.

The worst news in all this is that some team with a late first round draft pick is probably going to get yet another player who can score lots of goals. Great.

Oh yeah, and here's a picture of Plata with Will Bruin. 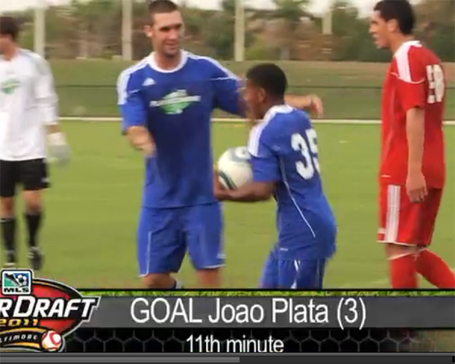