Share All sharing options for: Benny Award 2: The Nelly 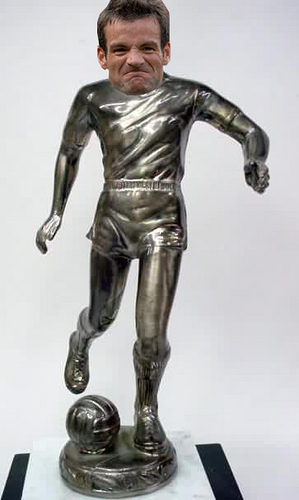 So maybe the election results aren't going the way you'd like tonight. You've still got a chance to influence another poll with your vote!

The Nelly award is named for Ryan Nelsen, DC United's former captain and center back who guided the team to an MLS Cup in 2004 before departing to Blackburn of the EPL and leading his New Zealand squad to a scoreless tie against Italy in the World Cup. Awesome.

As a new requirement this year, we'll be nominating only players that were acquired via transfer, trade, or free agency. Rookies don't qualify. This serves to make the Nelly Award a bit more comparable to the MLS Newcomer of the Year Award. But mostly, it's just to ensure that Andy Najar doesn't win ever single award.

Last year's Award went to Dejan Jakovic, who beat out Chris Pontius in a vote that wasn't as close as expected.

1. One of the key acquisitions this offseason that was supposed to make a difference on the scoreboard for United was Danny Allsopp. Say what you will about the guy's speed and awareness, but at least he could shoot. Allsopp was tied for the team league in goals with five.

2. The biggest preseason acquisition though was Troy Perkins. After United had missed the playoffs by just a point each of the previous two seasons despite some obvious goalkeeping flaws, Perkins was supposed to be the final piece to elevate them back to the postseason. It didn't quite work out that way, but he did have five shutouts.

3. While other MLS teams brought in well-known and highly-skilled designated players in midseason, United turned instead to Branko Boskovic. The Montenegran international immediately showed a positive ability to control the orchestrate the attack, but was occassionally a defensive liability when playing in central midfield.

4. Appearing in 14 matches since being acquired from the Uruguayan First Division, Pablo Hernandez demonstrated great amounts of skill playing as a withdrawn forward. However, its never good when one of your forwards finishes the season without a single goal.

Cast your votes for the next two weeks and feel free to argue your choice in the comments.