Share All sharing options for: Benny Award 5: The Esky 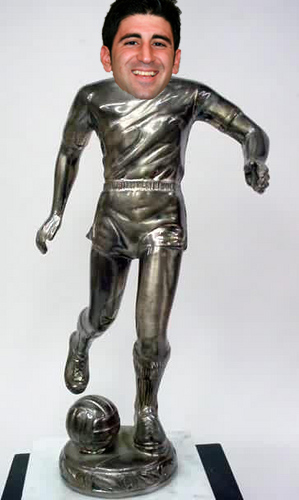 This week’s award appears for the first time in 2010, as the usual Week 5 award – the Grosy – has been discontinued. The Grosy was designed to go to the "ballsiest" player (to use the technical term) on the roster, but the nominees for the award always seem to overlap somewhat with the Richie. And I’m not sure anyone really makes a great Grosy candidate this year. Nobody lives up to the tradition of Josh Gros, who was frequently seen wearing headgear and a cast on at least one arm. Sometimes both.

Instead we bring you the debut of the Esky Award, which will be presented each year to the "fan favorite" on the roster. The award is named for Alecko Eskandarian, who vaulted from good player to fan favorite based partially on the greatest celebration in MLS history. Even after leaving D.C. United and moving on to other MLS clubs, Eskandarian remained both a popular player, and an important part of the organization when he returned to take on a new role.

So who on United’s current roster can reach the popularity of Alecko Eskandarian?

1. The young phenom Andy Najar has attained national attention for his rise from the D.C. United Academy to MLS Rookie of the Year. For United fans though, it was his overtime goal in the U.S. Open Cup Qualifying match against Real Salt Lake that lifted Najar to stardom. Ever since that moment, RFK Stadium becomes electric when Najar dribbles at an opponent.

2. In his final season as a member of United, Jaime Moreno probably didn’t see the minutes that he deserved. The sight of Moreno standing next to the fourth official always meant that the game was about to change, for better or worse. The club dedicated an entire month’s worth of web coverage to Moreno, and even that probably wasn’t enough for all he did to help building the organization. 12 trophies.

3. The team captain now and into the future is Santino Quaranta. In terms of providing insight, media relations, and tattoo art, Quaranta is the best on the team.

4. I can’t quite put my finger on why, but Kurt Morsink finished second in the dcunited.com fan voting. His mom must have a lot of friends?