Share All sharing options for: Benny Award 1: The Richie 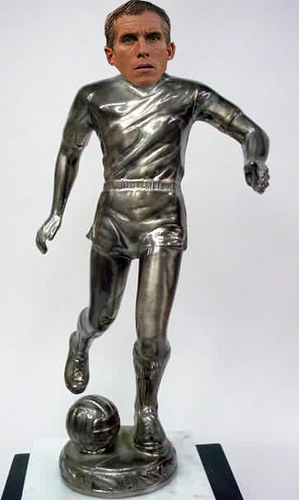 The Richie Award is presented to the most underrated player on DC United's roster. The award's namesake is Richie Williams, who was an excellent player but typically went without mention during discussions regarding United's championship winning teams of the late 1990's.

Last year, it was Bryan Namoff who captured this award, supplanting the 2008 winner Clyde Simms.

I don't think Simms is really eligible for this award anymore, because he's begun to earn more respect nationwide. And thanks to the lack of star power on the rest of the roster, it's not hard for Simms to get a bit more attention this year than in years past. This award is intended for players who aren't quite as well known.

1. After being cast off previously by the Houston Dynamo and Toronto FC, Julius James started a few matches last season, and was expected to compete for the right fullback role in 2010. Instead, he turned into United's most consistent defender, pairing centrally with the much better known Dejan Jakovic.

2. He's been described as a "slightly lesser version of Bryan Namoff". Jed Zayner only played nine matches for D.C., but the team only gave up 12 goals during that stretch. Not bad. Zayner is a legit candidate to start at right back next season.

3. Stephen King didn't get on the scoreboard this season, but he quietly did all the little things right in central midfield, including not passing the ball directly to players on the opposing team, which is an improvement over some other United players.

4. Second on the team in goals per 90 minutes, Adam Cristman wasn't given much of a chance to have a bigger impact on this team. The hard-working forward provided some positive play when called upon before falling to the injury bug around midseason.

Voting is open for the next two weeks, and please feel free to argue for your choice in the comments.