Black And Red Trading Card No. 1: Hand Of Gomito

Share All sharing options for: Black And Red Trading Card No. 1: Hand Of Gomito

In an idea lifted directly from Jon Bois of SBNation.com, we bring you a new weekly feature: Black And Red Trading Cards. 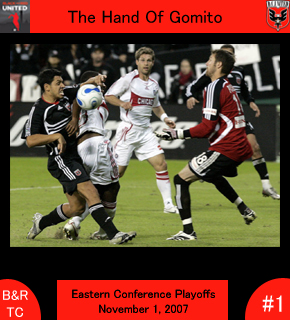 After winning the Supporters' Shield for the second year in a row, D.C. United lost 1-0 to the Chicago Fire in the away leg of the opening round of the Eastern Conference Playoffs. When returning home to RFK Stadium the following week, all hope looked lost for United as they fell behind 2-0 early in the match. Clyde Simms and Christian Gomez each scored in the second half to pull D.C. even in the game, but still a goal down in the series. Then, in stoppage time with the season on the line, an amazing individual effort by Gomez saw him power past two defenders and pound the ball into the net, forcing RFK to erupt, and seemingly forcing overtime. The goal was however disallowed due to a handball. Video replays at the time were inconclusive, and the fans thought the team had been screwed over by officiating yet again, but this picture tells us that it was the right call. United hasn't returned to the playoffs since.