D.C. United Gets Something for Nothing through Charlie Davies

Charlie Davies is back in MLS after joining the New England Revolution, and DC got something for him.

Share All sharing options for: D.C. United Gets Something for Nothing through Charlie Davies

After days of rumors, speculation, and various reports it is now official. The former D.C. United forward Charlie Davies is coming back to MLS, this time as a member of the New England Revolution after a loan was completed with Randers FC and a trade was completed with DCU as NBC Sports and various other media outlets have reported.

Did you know: That DC United still held Davies' rights? Because I didn't, and apparently neither did our own "Soccer Insider", Washington Post reporter Steven Goff.

#MLS records show #DCU tried to re-sign Charlie Davies 2 years ago -- news to me. Hence, kept rights even after he returned to Europe

Let's rewind to a few days ago. When I first heard whispers that the "Davies to Revs" rumors may hold some water I thought, "That's great! Another solid American player returning home to play in MLS (though, I wish it was for United, sigh.)."

Then I read the tweet above from Goff and thought, "Wait, DC still holds Davies' rights? Hold on, WE CAN GET SOMETHING FOR DAVIES?"

At the time, I was thinking more along the lines of our beloved club receiving an international roster spot or, as Randy Moss would say, "straight cash, homey."

I was wrong. Instead, United received New England's final pick of the 2014 MLS SuperDraft.

Get the Revs fans' take on the Davies signing 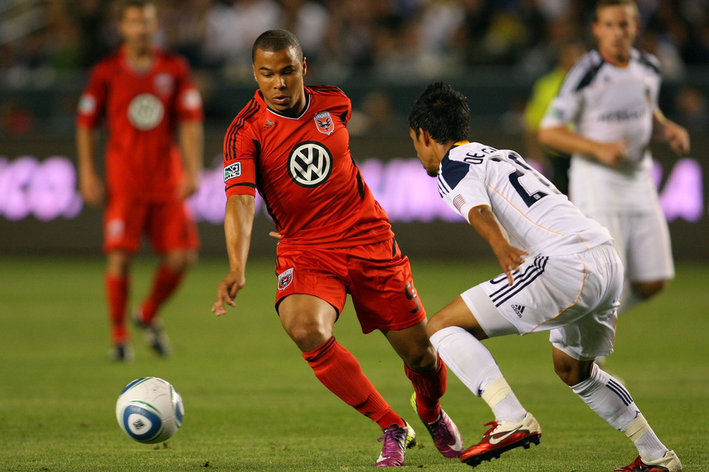 The Bent Musket is lukewarm about Davies coming to Foxboro. They like it, but they're a bit disappointed it's not a bigger splash by the Revolution. More at TBM.

On one hand, I feel like United got screwed. Most of the time late round picks have trouble even making the squad, let alone becoming a starter or contributor. Some teams even pass on drafting player in later rounds and essentially, a team's last draft pick is the lowest valued trade chip they can offer. A bag of M&M's might be more valuable.

In a similar situation, the Chicago Fire received Mike Magee for the rights to Robbie Rogers, (yes, I know he badly wanted to go home, but still) but Davies' rights only fetch a measly late rounder? Also, for the record, United gave higher compensation to teams in exchange for the services of Mike Chabala and the legendary Long Tan (ok, he isn't legendary, but still).

So, if you're looking at the deal from a glass-half-empty perspective: DC got screwed.

On the other hand, it's been almost two years that Charlie Davies has worn a "VW" on the front of his jersey and as I said above, I had no idea we still held his rights. So whether it's an international roster spot, cash, a bag of M&M's, a Dunkin' Donuts gift card, or in this case a late round draft pick, I'm okay with getting SOMETHING for a guy that hasn't played for United in almost two years. In addition to that, DC had no desire to bring Davies back at this point so fans should be okay with getting something for nothing.

So, from a glass-half-full perspective, hey it's something. Even if that something turns into the Red and Black drafting another Evan Raynr.

What do I think you ask? (Alright, you didn't ask, but I'm going to pretend you did)

For MLS, it's great that another US player is returning. He isn't Clint Dempsey, but he is still a guy that fans are familiar with. He's a guy that will sell jerseys and tickets in New England, an area he is well known having played his college ball there.

For Davies, it's great for him as well. If you have been paying any attention to my "United Abroad" posts you'll notice I rarely talk about Charlie Davies and when I do, it was never anything news breaking. In almost two seasons with the club Davies made twenty six appearances and scored... wait for it... zero goals. As a member of the Black-and-Red, Davies made twenty seven appearances and scored eleven goals in just one season. Clearly, MLS suits Davies better and he's coming to a Revolution team that may need a forward heading into next season with the recent news of Juan Agudelo transferring to EPL's Stoke City FC in January of 2014.

For DC United, I'm looking at it glass-half-full. While I feel that United had the leverage and could have gotten more out of the Revolution, I'm happy that they got something for practically nothing.