Share All sharing options for: Benny Award 3: The Andy 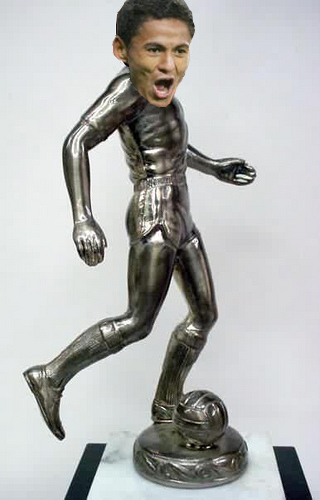 The Convey Award has been cancelled this year. There won't be any voting for DC United's rookie of the year on this website. It would have been a runaway anyway.

MLS announced their Rookie of the Year award yesterday. Andy Najar. The first United player to win the award since Ben Olsen, and the youngest player in any major American sports league ever to win such an award.

And so for our Benny Award series, the rookie of the year award on this blog will forever more be known as The Andy.

As you know, I voted for Najar, and I did my best to lobby my fellow SB Nation soccer editors to cast their ROTY votes for Najar as well. Yet I was still worried that a Tim Ream campaign was gaining traction with the main stream media, since he was the only legitimate contender playing for a playoff team.

But Najar prevailed, and he deserves it. He was far more electrifying than the other candidates, and certainly a more complete player, despite being years younger. He's already come a long way.

For what it's worth, Hamid would have been a great candidate for the Convey/Andy Award in most other years. Especially when you consider that in 2008, Ryan Cordeiro won the award in a year that three out of the four candidates have not played an MLS match since.