For some reason, they keep making D.C. United play games. Tonight, it's the Philadelphia Union, who are scrambling to cover for suspensions at positions where they lack depth. Maybe just this once, the Black-and-Red can actually play spoiler rather than just talking about it.

While games this season between D.C. United and the Philadelphia Union have not lived up to the acrimonious, red card-heavy past in the series, they have mostly stuck to a different pattern. When these teams get together, the games always tend to be close, regardless of how bad or good the teams are. The fact that both teams have a two-goal win over the other this year and that the third match was a 3-2 Union win is pretty much par for the course. United hasn't won since August 3rd and hasn't played well in a league game in a month, but in all likelihood this will be yet another close game between United and the Union.

It's not just history, either. Recent Philly games have been very, very tight. Throwing out the 5-1 drubbing they took on the road against New England, the Union have played ten other games since July 20th. The results split up almost perfectly: Three 0-0 draws, three 1-0 wins, and three one-goal losses. The odd game, naturally, is the Union's 2-0 win over United because 2013 sucks. Still, the evidence is pretty clear here: The Union aren't blowing people out, but they are defending very well as a team. In the aforementioned set of games, Philly let up just four goals (making the Revs loss even more of an anomaly).

Part of the issue for the Union is that the goals have dried up. This stretch of games we're focusing on is almost three months long, and in that time Philly has only scored seven goals. Stretched over a whole season, that's a lower goals-per-game rate than United, who as we're all painfully aware are in the running for worst statistical attack in MLS history. Hell, even over the same number of games over the same period of time, United has two more goals. The Union are still in the playoffs, so the results haven't fallen off a cliff, but their 4W-3D-4L record points to a team basically playing "first goal wins" soccer.

Philadelphia's offensive problems can be roughly boiled down to one problem: Jack McInerney's goals have completely dried up. Remember when Jack Mac couldn't stop scoring? When he was leading MLS with 10 goals and going to the Gold Cup? Seems like ages ago. McInerney's last goal in MLS was on June 1st; his last goal in any competition was in United's 3-1 Open Cup victory eleven days later.

The Union kept trying to attack in a manner appropriate for McInerney for a while, but eventually they had to move on and start offering up service designed for Conor Casey instead. Casey has actually tied McInerney for the team lead in goals, and the Union attack is far more reliant on crosses than it used to be as a result. United learned this the hard way the last time these teams met, as Casey scored twice and both goals started with a traditional aerial cross.

John Hackworth has scrapped his old, ill-advised tendency to tinker with his team. That means the Union will set out in the 4132 they've played just about all year. However, he will be forced into major changes after Fabinho's red card and a yellow card suspension for Sheanon Williams: 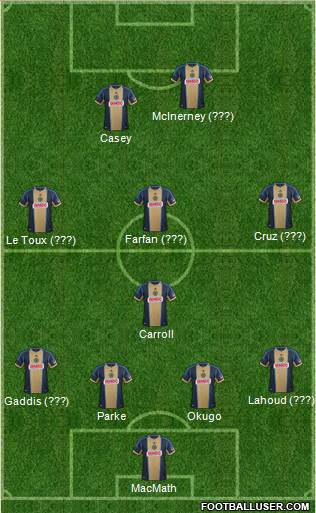 Both players are important, but Williams is the bigger loss. He's usually played quite well against United, overlapping regularly and exploiting our weakness on long throw-ins by, well, having a long throw-in. There's also the lack of useful back-up. Philly has a long-standing and inexplicable tendency to not have enough defenders on their roster. At first, it was Peter Nowak's severe, ascetic managerial style; now, it just seems like a lack of foresight.

While United fans might be jealous of the fact that the Union usually don't get punished for this flaw in their squad, today it should help us out. Raymon Gaddis can play either flank, but the Union only have one of him. Fabinho has played left back before, but with him out the choices are not very good.

The most likely scenario is for Michael Lahoud to step in at right back - leaving Gaddis to left back, where he's been for a couple of games in a row - but "most likely" in this case is still far from certain. Lahoud is fighting an ankle sprain, and is also very clearly not a right back. Chivas USA tried him there for a while, but he's a far better fit as a midfield destroyer.

The other options are Chris Albright (yep, he's still playing for some reason), Matt Kassel (another natural defensive midfielder, and one with very few MLS minutes under his belt), and even Sebastian Le Toux. That last one is highly unlikely given the struggles the Union have had in creating chances, but if Lahoud isn't fit to start, everything is on the table. Gaddis could also move over to right back if Hackworth wants to give rookie Don Anding - yet another Union conversion project - at left back.

The uncertainty in the back is the root of the midfield question marks as well. Danny Cruz has mostly been at right midfield of late, but the Union were scoring more goals with him on the left and Le Toux on the right. Meanwhile, Hackworth has discussed the possibility of replacing Fabinho with Keon Daniel, who only recently lost his central midfield spot to Michael Farfan...who could also play on the right if Hackworth was won over by Kleberson's 95th minute gamewinner last week. Got all that?

With Le Toux possibly playing on either midfield flank or right back, there's some uncertainty at another position he plays: Forward. Le Toux hasn't been a striker much this season, but McInerney's problems and the Union's relatively toothless attack would normally make this a possibility as well. However, this time around the competition is from the Union's preferred supersub Antoine Hoppenot.

Last week, Hoppenot made an impact against Toronto FC after replacing a listless McInerney with his speed and his direct running. There's little complicated or elegant about Hoppenot, but he's still a reasonable partner for Casey. Hackworth has been hesitant to make the move during McInerney's months of struggle, but if there was ever a fixture for him to give it a whirl, this is it.

There's also a tiny chance that he opts for a 4231 or 4141 - what with Casey being the only striker that can be relied upon - but I'm not sure the Union want to emphasize midfield possession. United has been very bad against teams that feed their wingers and bombard us with crosses, while we've done better against teams trying to play at a slower tempo.

Obviously this week, United needs to get the ball wide and isolate the Union fullbacks as often as possible. The more Chris Pontius gets the ball, the more likely he'll be able to terrorize Lahoud/Albright/whoever. On the other side, Nick DeLeon has done pretty well running at Gaddis in the past. Assuming we can take advantage of that mismatch, United's wide men should either continue to dribble into the box or play crosses in low. It would be nice if those crosses are being attacked by the return of Conor Doyle's hard runs, which have dried up a bit of late.

In the midfield, United would do well to cheat a bit towards the side Cruz isn't on as the Union tries to build their attack. Philly is big on sucking teams in on the left side before switching the ball out into space for Cruz to chase down on the right. If Cruz is having to participate in the creative side, however, it emphasizes the parts of his game that still need some work. Plus, if the Union are having to build from the right, it'll put whoever the unfamiliar right back is on the ball regularly as well.

As United has struggled all season to deal with good target men, it's vital that we starve Casey of service rather than try to deal with him once he has the ball. Preventing crosses is a big factor here, and the absence of Williams and Fabinho should give the Black-and-Red a head start. The main threat will likely be Le Toux.

Whether McInerney or Hoppenot starts up top, the Union will likely look to play some early through balls. McInerney is just more comfortable pursuing that sort of service, while Hoppenot is all about speed. United will need to apply early pressure on the ball and/or show more discipline and awareness than we usually do. In that latter case, the idea will be to avoid leaving gaps to pass through. Hoppenot tends to stick to the right half of the field, which will mean Ethan White - the only center back we have with any chance of keeping up with him - won't be able to track him without throwing the back four into disarray.

The loss of Williams means the long throw threat is gone. However, the service from corners is still worrying. Between Le Toux taking the corner kicks and both Casey and Amobi Okugo available as targets, it's a significant problem. United is weak on set pieces to start with, and Philly has had a lot of success on set pieces against us, so it's going to take a big step up as a group and individually. With Kleberson scoring the winner last week direct from a free kick, there's now one more threat to be concerned with.

Ideally, United will be the team we saw in Open Cup play. That United repeatedly took advantage of the Union's flaws, forcing them onto the back foot with pressure and getting after the fullbacks regularly. Of course, it helped that we got a classic De Ro performance in that game, but it was United's ability to dominate territorially and set the terms that made that hat trick possible. If we get caught up letting the Union play their game, it's going to be yet another long evening at RFK.