MLS Statistical Analysis 6.0: Looking Back at 2013

For D.C. United, it can't get much worse than last year.

Share All sharing options for: MLS Statistical Analysis 6.0: Looking Back at 2013

Statistical Analysis is back for 2014, starting with a look back at 2013 as a whole. Very quickly, if you've never read this before, it's a look at various offensive, defensive, and goalkeeping statistics for all teams, as well as D.C. United's roster. I'm the first to admit that statistics don't mean everything, but it's fun to examine and discuss. With 34 games on the schedule, I'm aiming to chime in with an installment this season every 8 or so games, though I may be cajoled into doing an earlier one to start the year. Let's get into it. 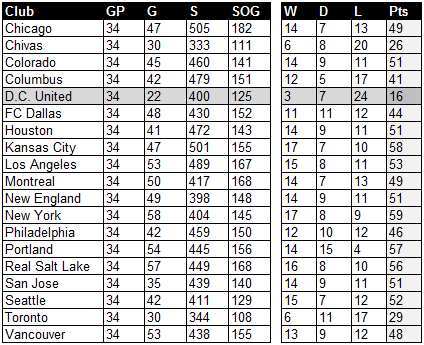 First of all, I see that just two teams managed 500 shots over the course of the season, Kansas City and Dallas. Shooting 500 times in 34 games would be an average of 14.7. Also, and really unrelated to shots, having to double our wins (3) in order to be tied for last is really awful when you see it in print a few months later.

Sitting at the very top are the New York Red Bulls, winners of the 2013 Supporters Shield, their first ever trophy that they'll have to pass on to the next winner so their trophy case will be empty again. By a quick glance, you'll see that they edged out Real Salt Lake to score the most goals per game (1.71), which is interesting because they don't shoot a lot (11.88 SPG), good for 15th. By comparison, our own DCU shot just 11.76 times per game. How does a team who shoots more often than just four teams lead the league in goalscoring? They finish fifth in shots on goal (35.89%), and first in shots resulting in goals (14.36%), because they also finished first in shots on goal resulting in goals (40%.) Translation: They didn't shoot a lot, but when they did, they were accurate and in places the goalkeeper couldn't cover. Related news: Tim Cahill scored 11 goals on 21 shots on goal, a rate of 52%.

On the other end of the shooting spectrum was Chicago. They led the league in shots per game (14.85), and while they were fairly accurate (36.04% SOG, 4th), they were the third worst in the league at scoring with shots on goal (25.82%). Right there with them in futility was San Jose, who were the second worst in both goals from shots on goal (25%) and shots resulting in goals (7.97%).

Down at the bottom, our D.C. United. In a word: Ugh. Semi-redeeming qualities, only because we're not last in them, are shots per game (11.76, eat it New England, Toronto and Chivas!) and shots on goal (31.25%, eat it Kansas City, Colorado and Houston!), both good for 16th. Yeah! Everything else is worse. Let's move on to the rankings. Each team is ranked in the above categories, with the top three in each colored in blue, and the bottom three in red. DCU is in gray for everything that isn't red because I usually highlight them anyway. 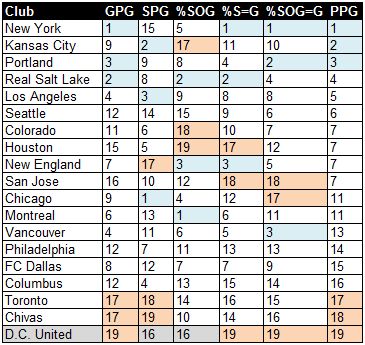 Sporting Kansas City were an interesting case last year. They narrowly missed out on the Supporters' Shield (2nd), and shot a lot (14.74, 2nd), but they weren't really great in any other category (no better than 9th), and they were really bad in shots on goal (30.94%, 17th). This usually means they'll show strongly in defense and/or goalkeeping.

There usually is also a team that performs well offensively, but doesn't do well in PPG. In 2013 that team was Vancouver, scoring the 4th most goals on the 11th most shots, and finishing no worse than 6th in the other categories, including a 3rd place finish in shots on goal resulting in goals (34.19%). Good numbers, but just 13th in points.

This is probably also a good time to point out that the bottom four teams in points, as well as seven of the bottom nine, hail from the Eastern Conference. The worst of those teams was our D.C. United. The numbers speak for themselves.

Let's move on to defense. This is basically just like offense, so think of it as "[Team] allowed" these numbers. Here's the data, sorted alphabetically: 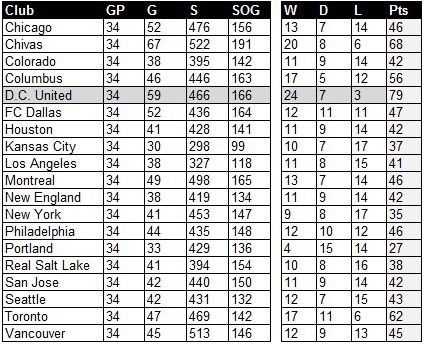 Well at least we allowed 8 goals less than Chivas.

Just one team allowed less than 300 shots per game, and that was Kansas City with 298. Los Angeles was 2nd with 327. Kansas City also was the only team to allow less than 100 shots on goal, with 99. LA was 2nd in that category with 118. Remember what I wrote about Kansas City's offensive stats not matching their overall success? We're beginning to get into why. How great is the 99 shots on goal allowed? Second place LA is closer to 5th place Portland (136) than they are to KC. And for futility, Chivas allowed nearly 100 more shots on goal (191) than KC.

Let's move onto the percentages, sorted by PPG. 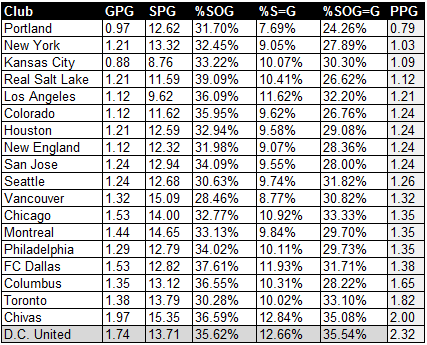 Portland rose to the top as the stingiest team in the league in terms of points. It's not a surprise, considering they were beaten just four times over the course of the season. Unfortunately for them, they also earned 15 draws, which is a lot for a team trying to win the Supporters Shield.

Chivas and Vancouver were the only teams to allow 15 or more SPG, with 15.35 and 15.09 respectively. Vancouver, however, were the only team to allow less than 30% of shots on goal (28.46%), which is interesting because they're supposed to be a good offense/bad defense team, which may yet be the case.

D.C.'s numbers are bad, but slightly better than their offensive numbers, and that's truly damning with faint praise. How bad are they? See the rankings below: 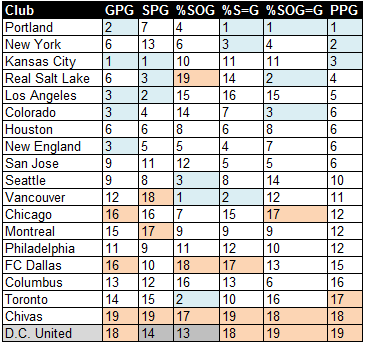 Portland was great almost across the board, except their SPG number (12.62), which is actually okay because their S=G and SOG=G (the latter of which is basically save percentage that also accounts for balls saved off the line by other defenders) are great. Conversely, Kansas City's SPG number is great as we know, but their S=G and SOG=G numbers are not actually that great. I expected better performance here, but I guess it means that even if you allow a high percentage of shots on goal to go in, it doesn't matter as much if you don't allow a lot of shots.

Down toward the bottom of the table, Toronto has one thing on which to hang their hats: They don't allow a lot of shots on goal. They're 15th in shots allowed (13.79), which isn't good, but 2nd in terms of SOG (30.28%). Unfortunately for them, the rest of their numbers are between below average and poor.

Well, United isn't the worst at everything. Will an entirely new back four be sufficient to cause a serious uptick in defensive performance? We'll know soon. 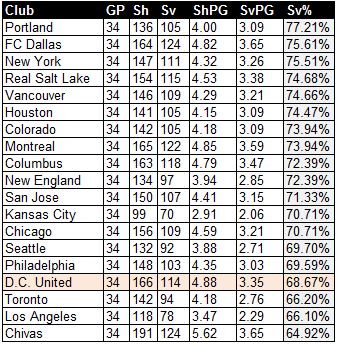 Kansas City's goalkeeping looks like it isn't that great, and may be artificially pumped up by not facing many shots. Meanwhile, FC Dallas, generally poor defensively, make an unexpected appearance toward the top, in 2nd, but they're surrounded by generally good teams. Propping up the table were the two LA teams, which is a surprise if you think the Galaxy were too good overall to have goalkeeping that was that poor, but then you recall that Carlo Cudicini allowed 27 goals on 68 shots, for a 57% save percentage. Only Jaime Penedo's brilliance (7 goals allowed on 31 shots, 77% save percentage) over 9 games, and to a lesser extent, Brian Rowe's 74% save percentage in 4 games, made the Galaxy's goalkeeping numbers look respectable.

Let's get into the performance of United's players. I've highlighted in green the leaders in each stat other than games and starts, with only players who played 700 minutes or more eligible to lead a statistic.Sorry not sorry, Carlos Ruiz. Players with red blocks had zero value percentages, and poor Syamsir Alam played zero minutes. Here are the stats, organized by minutes played: Games Played / Games Started / Minutes / Goals / Assists / Shots / Shots on Goal / Goals, Assists, Shots, and Shots on Goal per 90 minutes / and the rest you should know by now 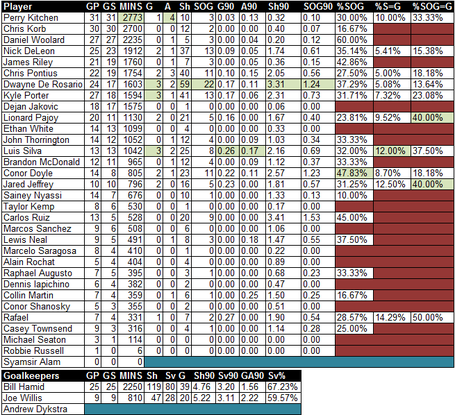 At the top, you have Perry Kitchen, leading in minutes and... assists. Of course, because in a crappy season, one of the players you'd least expect to lead the team in scoring did just that. Leading the team officially in shots and unofficially in exasperation was Dwayne De Rosario. He also, of course, led in goals, and it's sad that his 1.24 shots on goal per 90 minutes led the team. One of the most unexpected things I found was the tie in SOG=G, between Jared Jeffrey and... Lionard Pajoy? They each scored twice on five shots on goal. Of course, the edge should probably go to Jeffrey, because his 5 shots on target came from 16 attempts, while Pajoy's came from 21 attempts.

I'd say the most offensively efficient player in the team was Luis Silva. He was tied for the team lead in goals, and led in goals per 90 minutes (.26), assists per 90 minutes (.17), and shots resulting in goals (12%), while finishing 3rd in shots on goal resulting in goals (37.5%). I'm really looking forward to seeing what he can do with a legitimate forward playing in front of him.

That's it and that's all for the look back at 2013 MLS statistics. Let us never speak of it again, unless we're talking about how much more awesome DCU is this year. We'll be back in a couple of months or less with the first 2014 installment.