The Legend Of Bodkin

Share All sharing options for: The Legend Of Bodkin

Last night's 2-1 victory over the Richmond Kickers in the 2012 U.S. Open Cup was big for D.C. United. Likewise, it was big for the Black And Red United community. Hundreds of United fans were furiously refreshing their Twitter feeds while also actively following along in our GameThread, as hosted by our own Benuski, who was live-blogging from the press box at Richmond's City Stadium to make up for the fact that there was no video or audio coverage of the game.

Much like United's, Ben's performance was not without flaw though. When Marcelo Saragosa scored the winning goal off a corner kick by Branko Boskovic, the following is a thing that actually happened. 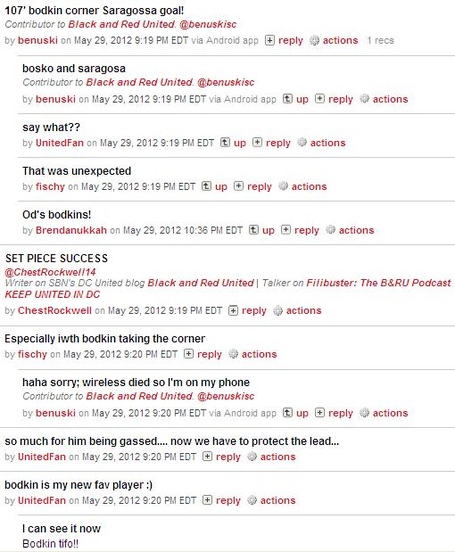 Instead of coming from any other player at any other time, it came in the second overtime period of a match that seemed certainly headed for penalties, with United facing a possibly interspecial goalkeeper that had thwarted chance after chance over the course of the game. It came while United fans were watching in equal parts delight and insecurity as other MLS teams were dropping like niells to lesser opponents across the country. A wave of anxiety was sweeping the D.C. region, building greater by the minute.

That anxiety was funneled from our sweaty brows through the underground tubes of the internet all the way to the connection between Ben's fingertips and his mobile device, eclipsing in a single word: Bodkin. An Autocorrect that shall never be forgotten.

I personally spent the next three straight minutes laughing, with no regard for my surroundings. What had so nearly gone totally wrong was suddenly imperfectly right, and the natural bodily reaction is laughter? It can't and won't be explained. My wife asked me what I was laughing at and I refused to tell her. But not out of secrecy or embarrassment, but more out of confusion. I knew that she wouldn't understand. How could she? How could anyone?

Some do though. Those who were with me in the GameThread understand completely, because I'm willing to bet that many of you had the same exact unexplainable reaction. It wasn't THAT funny. So why were we all laughing?

The chain of events leading to The Legend Of Bodkin could not be predicted, and will never be replicated. The wireless internet in City Stadium had to go down, there had to be no television coverage of the game, Nick DeLeon had to miss a sitter or two, the Kickers' goalkeeper had to play out of his mind, Boskovic had to be a complete disappointment for the last 1.75 MLS seasons, and technology had to advance to the point where cellular phones think they are smart enough to read their users' minds but can't actually quite do it yet.

Much like Brankostock two years ago, Bodkin will forever be programmed into the memories of many D.C. United fans. God I love the Open Cup.