D.C. United fans in Virginia and Maryland will be able to watch their team without cable

Share All sharing options for: D.C. United games available over-the-air throughout the Mid-Atlantic

With the season's first locally broadcast games coming this weekend, D.C. United fans outside of the District have been wondering if they will be able to see their team play. The team previously announced that games will be shown on WJLA and NewsChannel 8 in the District of Columbia; this Saturday's game against the New England Revolution will be on NewsChannel 8.

However, today D.C. United announced that this game, and the rest of the season, will also be available in Baltimore, Richmond, and Norfolk; not only that, but these games will be available over the air to anyone with an antenna:

In addition to carrying the game, these networks have also blocked out time for a half-hour pregame show and a half-hour of content post game.

This is a better deal for D.C. United fans than previous TV coverage, especially for those outside of the DC metropolitan area. WJLA is over-the-air in the District, and NewsChannel 8 reaches 1.2 million in the DC area. And fans in Baltimore, Richmond, and Norfolk can now watch D.C. United without a cable package whatsoever; if you have cable, you can find most of these channels as a part of your package as well.

Below, I've compiled a map of the over-the-air coverage for these three stations as defined by the FCC; the green circle includes coverage when the team is on WJLA over-the-air as well. Your ability to get each channel depends on your antenna and the terrain. 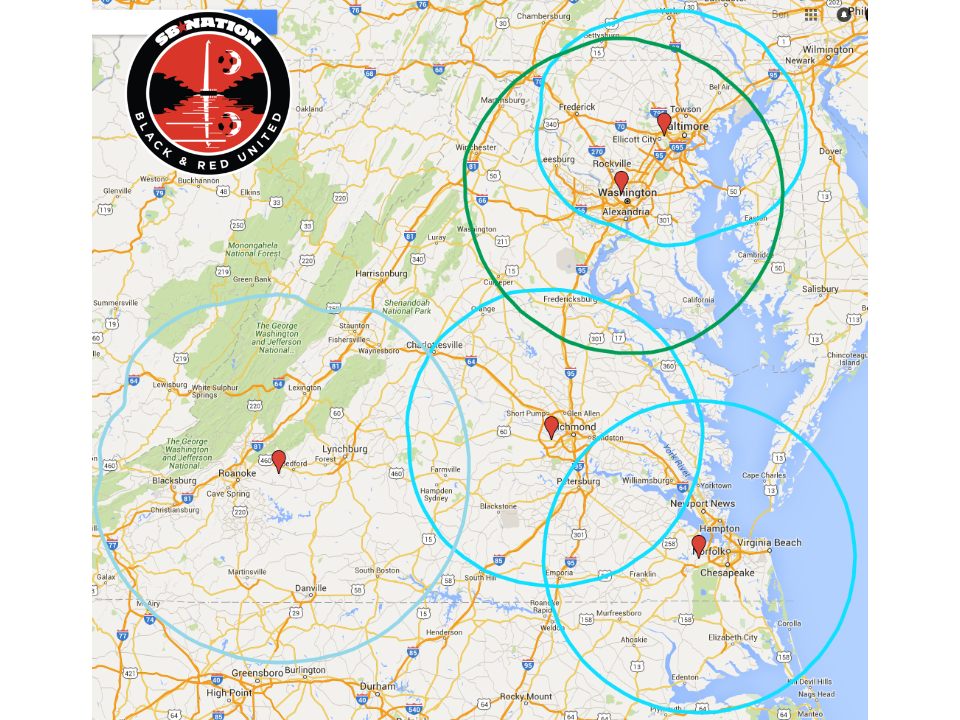