Share All sharing options for: Benny Award 7: The Harkesy 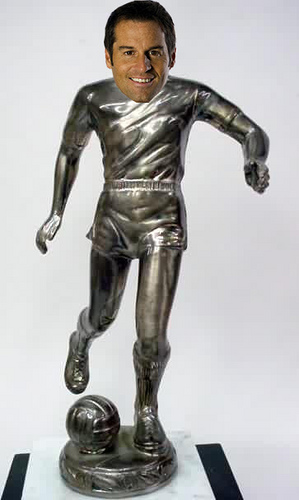 Every year, the Harkesy Award is presented to the D.C. United player/coach/other who has exhibited outstanding leadership qualities. The Harkesy may even be a predictor of things to come. Last year's Award went to Ben Olsen, before he'd even retired, and long before he'd be named head coach. And the runner up last year? Santino Quaranta, who I had noted as the leader of the younger generation of players. He's now their captain.
Those two meet again for a rematch this season. And I'd be surprised if we didn't see a similar result.

1. "You talk, we will follow." That's what Julius James wrote when signing the game ball from Ben Olsen's first career win as a coach. We've already talked at length about Olsen's abilities in recent days.

2. Our second candidate also spent a brief period of time as United's coach. Briefer than any other coach in team history. It's Curt Onalfo, who was dismissed with a 3-12-3 record and just 15 goals scored in 18 matches.

3. Like the head coaching position, United also switched captains in the middle of the season. At the start, and for several years prior, the job belonged to Jaime Moreno.

4. The second half of the season, Santino Quaranta took over the armband, and immediately asserted his influence by picking a fight with goalkeepers coach Mark Simpson. Well Quaranta is still here, and Simpson is not, so you can guess who won that one.