Black And Red Trading Card No. 2: RFK Delays And Cancellations

Share All sharing options for: Black And Red Trading Card No. 2: RFK Delays And Cancellations 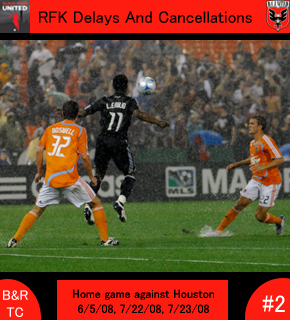 The 2008 home match between D.C. United and the Houston Dynamo was undoubtedly cursed. The teams played for just 15 minutes on June 5 before the game was postponed to July 22. Rolling blackouts that morning though knocked out the power in much of Southeast DC, including at RFK Stadium. But surely everything would go well when the teams finally collided on July 23, right? No. Torrential downpours once again wreaked havoc on the field and the stands. A brief power outage once again darkened the stadium, but the fans would sing on, the stands would bounce on, and the teams would play on after yet another delay. United ultimately lost 2-0.

The Black And Red Trading Cards are a weekly feature highlighting important moments, matches, and players from D.C. United history. Have an idea for a future card? Send it to blackandredunited@gmail.com.