Share All sharing options for: Black And Red Trading Card No. 3: Steve Rammel 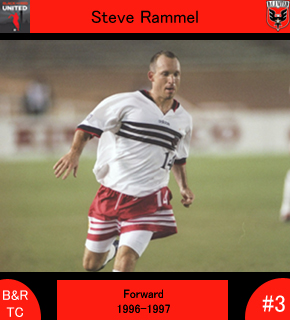 Before there was Jaime Moreno, there was Steve Rammel. The original D.C. United withdrawn forward. Rammel scored 15 goals in 37 matches for United in his one and a half seasons with the team. Rammel, along with his aerodynamically balding head, was a hard working underdog on a team full of superstars. United traded him away to the Colorado Rapids for Roy Wegerle midway through the 1997 season, making Rammel the only guy to play in the first two MLS Cup Finals with two different teams.

Photo by Harry How, Getty Images.

The Black And Red Trading Cards are a weekly feature highlighting important moments, matches, and players from D.C. United history. Have an idea for a future card? Send it to blackandredunited@gmail.com.