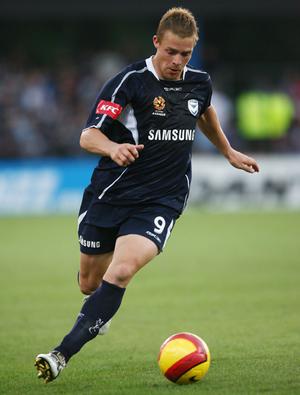 In an effort to add to a thin group of strikers, DC United announced the acquisition of former Australia forward Danny Allsopp. Allsopp has been to a wide array of clubs, including Manchester City and Hull City (though neither were Premier League teams at the time), Melbourne Victory (former home of Fred), and most recently Al-Rayyan of Qatar.

I'm not going to lie and say I know a ton about him, though I do recognize his name for some reason. It would appear that there are some reasons to feel positive about this move. On the plus side, we're bringing in a 6'1" striker; I believe this makes him the tallest striker that will figure in a regular role that we've ever had. There's also the fact that he has managed to get 3 caps for Australia, a national team roughly equivalent to our own. Finally, Australian forwards tend to have a physical approach, which is a nice contrast to what is currently a team high on technique but short on aggression.

That said, I hope people don't heap expectations on him. If his Wikipedia entry is any indication, he's only reached the "goal every other game" plateau (generally acceptable as a good strike rate) in the A-League and the Qatari Stars League. If Fred is any indicator, being a top A-League player does not mean MLS stardom. There's also the undeniable fact that he's something of a mercenary; guys who don't stick around places tend to start well but burn out (recent example: Luciano Emilio).

My initial impression is that Allsopp and Moreno will be rotated alongside Pontius depending on opponent, venue, and Moreno's overall fitness. It seems that Allsopp's skill set is going to be different from that of Pontius and Moreno, which is a positive. I've been of the opinion that we lack variety up front for a little while. I don't expect Allsopp to come in and replace Emilio's goals all on his own; rather, I think he and Moreno should be aiming for 7-10 goals apiece. The success or failure of this move will depend on Allsopp's goal return and the hit against the cap United is taking. I'd say we should be looking at no more than a $150K salary (assuming the CBA results in a predictably minor boost to the cap).