Upon first getting out of the car at the IMG Academy in Bradenton, Florida, I hear a loud voice giving an orientation speech to young teenagers. He shouts out "I’m going to give you the most important advice you’ll get this week. That word is dress code." This is followed by a collective groan. "I’m serious. Wear your IMG academy shirts with collars or hoodies everywhere you go, or you’ll be sent back to your dorm room."

I sure hope IMG Academy has more soccer offerings than that. Point in case on this 75 degree, cloudy day, my wife and I head over to aluminum bleachers where 25 souls are set to view the DC United preseason game from the stands, perhaps 5 of which are for DC United. The others were just there so see some quality soccer. They were not disappointed.

The Swedish team Jönköpings Södra IF came out from their locker room looking like choir boys. After the whistle blew they swore like sailors. Perhaps they learned their English in a British pub. A few hard fouls later the referee came out with his yellow cards in this friendly match turned bar room brawl.

The DC United first team came out ready to play. They were organized and passed the ball quickly. The Swedish Team was clearly outclassed and back on their heels. Or perhaps it was just a different style of play. In MLS I am used to seeing teams pressing on defense, but the Swedish team was sitting back and waiting for their chances. As DC advanced past the center line they closed in quickly on the ball. 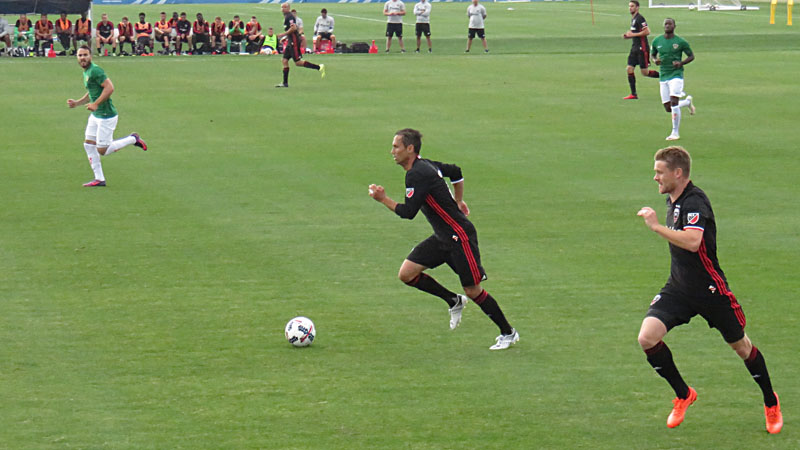 Marcelo was very active in the center and Ian Harkes looked very good in positioning and in connecting passes. He is still feeling his way, but he seems to be learning fast. Acosta was drifting out wide to find space and the ball looking for setting up the attack. DeLeon looks comfortable at right back and made some nice runs, but I guess we will see defensively. Franklin also looks comfortable in the center, but time will tell. I look forward to seeing them play against an MLS opponent later in the month. First half DCU 2, Jönköpings Södra IF 0. 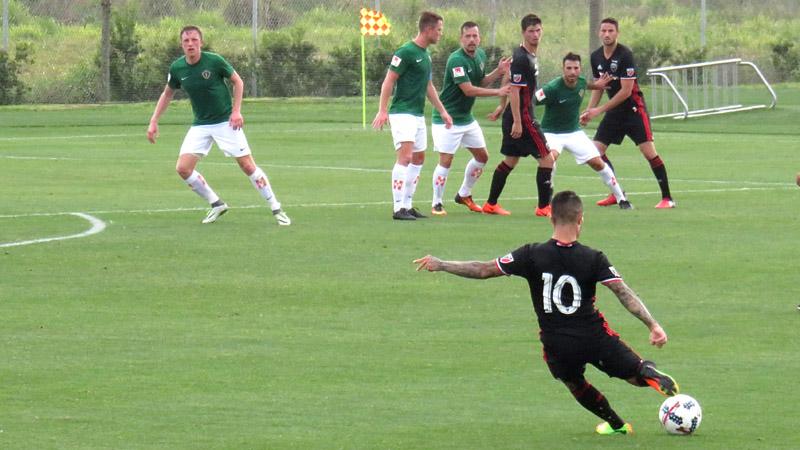 The second half was less than satisfactory for DC United. For the second team the passing was not crisp and the Swedish team clearly was starting to gain their footing. Le Toux looked very good scoring a goal early in the second half. Vincent looked comfortable directing traffic from defensive midfield. Marcelo is not getting any younger and it will be nice having both him and Vincent as possibilities for that position. On and off the ball Marcelo still plays at a pace of a 25 year old. Ortiz looks promising, but did not have enough of the ball to really make an impression. He looked a bit lost on the wing. The second team has many players that had not really have a chance to play together very much, so the lack of fluidity was somewhat expected. For us and probably the coaches, it was nice to see the new players (all but Chris Odoi-Atsem who I heard was injured in the game against Philadelphia). The game ended fitting enough with the sun setting over the Gulf. Final Score DCU 3, Jönköpings Södra IF 2.

As the guard waves us past the exit barriers, I’m wondering if this was a game closed to the public. I’m not sure that is the case because the game was free to enter and was being streamed by IMG Academy. DC United should do a better job publicizing whether or not fans can attend such games. Anyway, happy to have seen the new players on the team my wife and I head towards Captain Brians’s Seafood Restaurant and Market, a modest but all time favorite sea to table restaurant near the airport in Sarasota.