D.C. United is back in the CCL after five years away, and they'll open their slate in Group 4 against Jamaican champions Waterhouse FC. The Kingston-based side shocked most observers by winning 2-1 at Tauro FC on Matchday 1, so United can't afford to take them lightly.

It's been far too long, but D.C. United is back in the CONCACAF Champions League after last year's inexplicable run through the US Open Cup. Five years ago, United needed a win at Deportivo Toluca on the final matchday to advance, but could only manage a 1-1 draw (which is still among MLS's best results in Mexico ever). CD Marathon's 4-2 win at Trinidad's San Juan Jabloteh later that night began what turned out to be a half-decade in the wilderness.

This time, United's quest to be MLS's first CCL-era champion is an easier one. There is no powerhouse like Toluca in the group. Tauro FC is technically the seeded team in the group, but the CCL regulars out of Panama have had a major roster overhaul and sit in 9th place in a 10-team Liga Cable Onda.

Tonight's opponents are the other team in Group 4, Waterhouse FC of Jamaica. The history of Caribbean teams in CCL play is one of few wins, particularly once you remove the Puerto Rico Islanders from the equation. On top of that, the Jamaican league doesn't start until next month, so Waterhouse's only competitive game since May was their 2-1 upset over Tauro in Panama City.

Waterhouse's path to this point is an interesting one. The current Red Stripe Premier League (hooray soccer!) champions qualified for the Caribbean Football Union Club Championship via the Jamaica Football Federation Champions Cup. In other words, they won Jamaica's answer to the US Open Cup. In the CFU's regional tournament, Waterhouse rolled through their group - a group that included former CCL qualifier Caledonia AIA - winning all three games and running up a +9 goal difference.

This should have placed them into a four-team playoff in which only the worst team would miss out on CCL play, but a dispute between Valencia (that's Valencia FC of Haiti, not those Spanish dudes) and the Haitian federation saw this final round scrapped in favor of sending the remaining three teams through as group winners. Such is life in CONCACAF outside of a couple of countries. United fans may remember our qualification to the 2009-2010 CCL involved CD Luis Angel Firpo of El Salvador replacing CD Chalatenango (who were so broke at the time they sold their first division registration rights to another club).

So Waterhouse's path to this point may have been unexpectedly easy, but they proved their worth two weeks ago by taking an early lead against Tauro and hanging on for dear life after going down a man and seeing their preseason fitness levels be put to a severe test at Estadio Rommel Fernandez. That's the same venue where previous Tauro sides have beaten FC Dallas 5-3 and held Pumas UNAM of Liga MX to a 0-0 draw, and they're from the same league that produced an Arabe Unido side that knocked the Houston Dynamo out of last year's CCL. In other words, this was a result that must be respected.

Scouting a team based off of one game during their preseason is a fool's errand, but I'm going to try to pull it off anyway. Looking back on CCLs past, I can say that teams from the Caribbean tend to pick a formation and stick with it in CONCACAF play. Waterhouse's 4231, however, was not quite as rigid as the structures most CFU qualifiers have used. I expect to see the same formation, and probably the same eleven bar one enforced change: 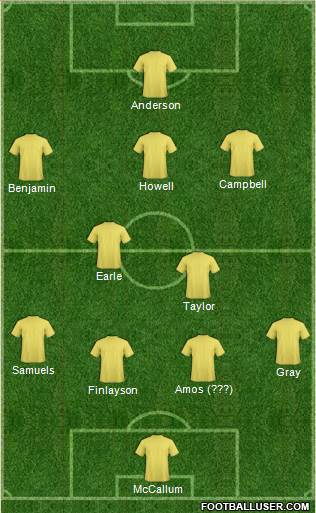 The only doubt that is actually based on what I learned watching Waterhouse's CCL opener is in central defense, where Upston Edwards - who was on the fringes of Jamaica's national team during last year's Hexagonal - was sent off after picking up two yellow cards. Coach Anthony Patrick opted to send on 36 year old Rohan Amos and go to a 4131, so one must assume he's the favorite to start at RFK tonight. Jamaica u17 national teamer Nathaniel Leslie is another option, though it seems rather reckless to send an 18 year old into this situation. In any case, they'll be competing to partner Nicholy Finlayson, who has two caps for Jamaica.

On the flanks, right back Hughan Gray also has caps for Jamaica, but more importantly for us he appears to be the fastest of Waterhouse's defenders. His clearance off the line in the 7th minute saved a sure goal, and he showed the occasional willingness to go forward. On the left, club captain Damarley Samuels ended up staying home and as a result looked less vulnerable positionally.

Intriguingly, both players are mostly listed as midfielders if you search them online, and they tied for the team lead in goals last season. In other words, this is likely a case of Patrick putting his best eleven soccer players on the field and filling in the outside back roles with guys who aren't naturals but can do the job in these circumstances. United should test both flanks early and often.

Shielding them will be the duo of Evan Taylor and Vincent Earle. Taylor, who earned his first cap as a 19 year old all the way back during qualifying for the 2010 World Cup but has since fallen out of favor, will sit very deep. Waterhouse didn't look to use him as a deep-lying playmaker; rather, he was there mostly for defensive purposes and to make himself available for backwards passes on the occasions that Waterhouse held possession at length.

Ahead of him is Earle, who scored what turned out to be the game-winner in the 16th minute. It was not a classic goal: Tauro goalkeeper Kevin Melgar's rash decision come off his line saw him miss the ball, foul midfielder Kenroy Howell, and leave an empty net for Earle to tap in after referee Oscar Moncada correctly gave the advantage. However, in the moments before the goal, Earle showed some unexpected speed for a central midfielder, and on the play in question he took a risk by stepping high to assist Howell's pressure on the ball (which quickly became the goal). The one-time Charleston Battery midfielder is a player capable of covering a lot of ground that United will have to keep track of, though it is worth noting that he was the player sacrificed to bring Amos in after the red card.

The key player for Waterhouse's attack is undoubtedly Romario Campbell. Not only is he capable of free kick wizardry (this is his goal against Tauro), but he's the player everyone else for Waterhouse looks to find first. I intentionally set him up very close to Howell rather than out wide on the right, as Campbell had the freedom to wander inside. United will need to be sharp in the midfield to prevent him from getting the ball, because he had plenty of ideas. Longtime MLS fans might see a bit of Andy Williams in Campbell's game, though there's a bit less bravado in Campbell than there was with "Bomma."

The midfield is completed by Howell and winger Juvaune Benjamin. Howell's role reminded me quite a bit of how Chris Pontius was used in 2012 playing in the same spot. His main responsibility was to prevent Tauro from building through their defensive midfielders rather than the stereotypical attacking midfielder duties. Still, it was his hard work that created Earle's goal, and in fact he ran and ran until a calf cramp forced him out of the game in the 77th minute.

Benjamin was not a major factor for Waterhouse, but he did stay wide and showed some legitimate speed. The 22 year old may not get many opportunities on the ball with everyone looking to Campbell on the other side of the field, but it wouldn't surprise me to see Campbell try to switch the ball to the left side once he draws some attention. With Waterhouse sure to sit deep and play on the break, Benjamin's pace along the left touchline is more important than the fact that he was a bit quiet against Tauro.

Up top is 35 year old veteran Jermaine "Tuffy" Anderson, who despite his age still has some respectable speed as well. Anderson won two straight Golden Boots in the Jamaican league - scoring 35 goals in the process - before last season, when he managed just 6 in half a season. He spent the spring with CD Aguila of El Salvador, scoring five goals in ten appearances if Wikipedia is to be believed, before returning to the Jamaican champions.

Anderson did plenty of thankless running and sprinted after more than his fair share of balls over the top, but the park-the-bus style didn't appear to suit his game. Nonetheless, his experience was evident in his runs off the ball when Waterhouse mounted a sustained attack, and anyone with his goalscoring record is going to be confident if they find the ball in the box. On the other hand, the Campbell highlight video above also shows him sending a good look about 15 yards over the goal.

In goal, Richard McCallum produced some big saves to hold off the mounting pressure from Tauro (who made a Tom Soehn sub in the 37th minute to move to a back three and finished the game in a 334 of sorts). The 30 year old claimed crosses without any fuss, but he did appear to have a couple of weaknesses. There were a few instances where he seemed slightly lost inside his six yard box, and on at least two occasions he went to ground earlier than was necessary. He also has a tendency to over-elaborate on his saves, which is usually an indicator that a keeper's fundamentals need some work. Still, he was able to make those saves, and from a pure shot-stopper perspective he's pretty quick.

On set pieces, Waterhouse is a threat whenever Campbell is within shooting range. However, as a group they don't have too many powerfully-built players (especially with the burly Edwards suspended). Their taller players, like Finlayson, are on the thin side. United should have a physical advantage defending the box on corners, but will still have to be wary of the quick burst of speed several Waterhouse players could use to get momentarily free of their marker.

At the other end, I think United should be able to create some real danger on their own corners and free kicks. Aside from the advantage in strength, Waterhouse had a tendency to let their box get chaotic too often. Yes, they were a tired side playing 10v11 on the road against an opponent throwing the kitchen sink at them, but it still seemed like every time Tauro got numbers in the box, the clearance required an adventure. If United can be first to these loose balls, the prize could be an easy goal.

Overall, United will almost certainly have the lion's share of possession, but the job is turning that into chances. Waterhouse will be defending deep, so the lack of ideas we saw against Rochester in the Open Cup would play right into their hands. Attacking down the flanks will help, as will pushing the tempo any time Waterhouse tries to move their lines up but loses the ball. Tauro had several great looks in transition but were either unlucky or lacked the precision to make them count. Even with the expected flood of second-choice players coming into the lineup, anything but three points in this one would be a severe disappointment.