On the other half of D.C. United's mission

In which the "Serve the Community" portion of D.C. United gets some attention.

Share All sharing options for: On the other half of D.C. United's mission

The participation of D.C. United within the community through various programs for more than a decade is known by many, but in a change of pace the team was called upon to take part in a similar program that not only had a slightly more visible sponsorship to it but also had a nice literary tie-in to boot.

For those without children of the age, the "Magic Tree House" series of children's books features a fictional brother and sister as they use a tree house to travel through various time periods as part of their journeys. Some are based on their own mythology and others are on historical events and the characters build their own stories with those. The series has more than 50 installments now and has been translated into several dozen languages, selling millions of copies and creating a devoted fanbase of 7-10 year old children. The most recent book, "Soccer on Sunday," has the two characters Jack and Annie, go back to the 1970 World Cup and have to find Pele, who plays a part in advancing Jack and Annie's quest to find Merlin the Magician. The author, Mary Pope Osborne (using the help of Pele's daughter and grandson) manages to set up a nice, believable environment for the reader while balancing the historical detail of the tournament.

How this figures into D.C. United is simple the soccer-centric book is part of a larger partnership between Osborne, Random House and JetBlue called "Soar With Reading," which helps to get these (and other) books into the hands of children into the inner city while encouraging additional reading by them. The program is traveling through multiple cities, with the New England Revolution participating last week and stops in current/future MLS markets in New York, Los Angeles and Orlando on the way, and Perry Kitchen, Bill Hamid and Eddie Johnson appearing at the THEARC Theatre in Southeast yesterday to help promote the cause. 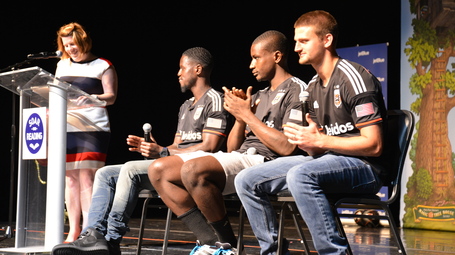 After an appearance by "Jack and Annie" and a reading of a book excerpt, the players came out and discussed not only themselves, their reading and their travels. They also did the requisite exhibition of soccer skills for and with the audience before retreating to the exterior of the hall for autographs, pictures and the like. 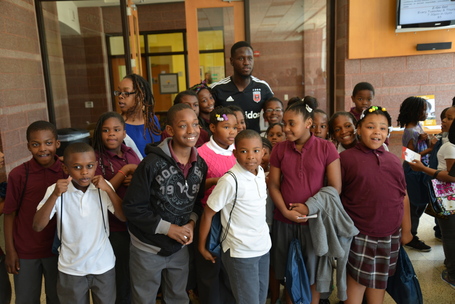 For more information on the book and on the program in general, go to the Soar With Reading website (a special thanks to Erin Healy for the facilitation of and pictures from this appearance).