After spending the 2013 season with the Seattle Reign, Christine Nairn was traded home to Washington. She returns to the Pacific Northwest this weekend with a Spirit playoff spot on the line and a little extra motivation.

Christine Nairn's toughness combined with technical skill and vision have made her a player others would rather not play against and more importantly, has helped turn Washington into a playoff contender. Nairn has scored six goals, has two assists and has taken 47 corner kicks this season. Her May 26 game-winning laser from 30 yards in stoppage time still stands as one of the top quality goals of the NWSL season.

Seattle nabbed Nairn with the seventh pick of the 2013 NWSL College draft after Washington surprisingly passed on her with their first round pick. While the Reign struggled as much for results as Washington did last season, Nairn was a bright spot for the club, scoring three goals and dishing out five assists.

In what was one of his most essential off-season moves, Spirit head coach and general manager Mark Parsons acquired Nairn as part of a multi-player trade, brining the Annapolis, Md. native home. 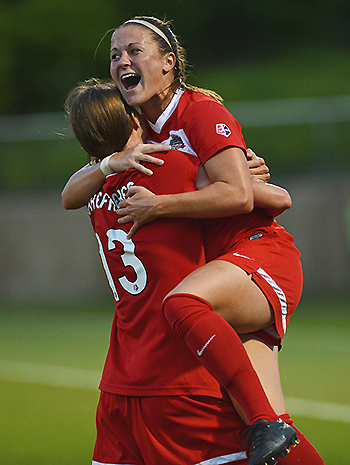 "She had a cracking rookie season in Seattle in a very tough situation," Parsons said. "We were dying for more technical, smart, intelligent players. We needed winners, and Christine is a winner. She is very, very determined and driven, doesn't like losing -- can't stand it."

Nairn, who attended Archbishop Spalding High School, brought a wealth of experience home to the SoccerPlex, where she also played growing up. She was a standout for Penn State from 2009-12. Her 41 assists are the second most in school history, and she helped lead the Nittany Lions to their first-ever National Championship appearance in 2012.

To say Nairn has made an impact with her hometown club this season would be an understatement. She's scored important goals, created critical goals, and she's brought a competitive edge that the Spirit so badly needed after the 2013 season. But that's not all, says Parsons.

"I think where she deserves huge credit is she's worked really hard on her defensive responsibilities -- being better at tracking runs, being better in the air, being better defending one-on-one, and protecting her back four," Parsons said. "It was not something people knew that she could even do."

Parsons also believes we're just seeing the start of what the 23-year-old Nairn can accomplish.

"She's grown some massive leaps from last year, but I still think there's a lot more to come," said Parsons. "She has the mentality and the attitude to want to improve all the time. She will only continue this path."

I spoke with Nairn this week about playing in Seattle, Washington, and learned a little more about how she spends her time not on the soccer field.

What are your thoughts on the season up to this point?

We've had a lot of ups and downs, but I think we're finally molding well as a team and we're peaking at right time. That's arguably what you want from your team. At the end of the season, there's only going to be one winner. We're playing our best right now so hopefully that can be us once we make the playoffs.

How was your experience in Seattle and how does Washington compare?

It's been completely different. First of all, the shock that I got drafted to Seattle was number one. Not that Seattle was a bad organization, but I was born and raised on the east coast. But Seattle is a great city. I loved the players, loved the coaching staff, the owners. We didn't get the results that we wanted, but it was a huge building year for the NWSL and for me as a player, especially coming from playing in a National Championship in college to losing so much. 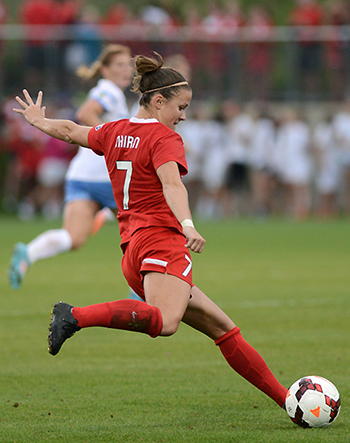 It's not about the result; it's about the journey. Yael [Averbuch] says it all the time: You've got to love the journey. Building every game, finding what works for you as an individual, as a player and not getting frustrated.

So I left Seattle with all the intentions of going back, and got the phone call that I'd been traded home. I absolutely love Laura Harvey as a coach and as a person. Her main thing was she had no problem trading me because I was going home.

I grew up playing at the SoccerPlex so to come full circle and be represented at the professional level was just coming home. That's the biggest difference. One's not home, one is home.

Do your family and friends get to come see you play?

Yes, absolutely. I actually commute from Annapolis every day. It's about 50 minutes. I live with my parents so free rent!

Can you compare Mark Parsons vs. Laura Harvey?

Whereas Mark is a little bit more methodical. He'll say -- they like to do this so we're going to tweak things here or there. Either way isn't better or worse, just different. I think Mark is trying to build a team just as Laura has. We've been pretty successful; going from last place to third place is quite the turn around. His way is working and I'm on board.

What is your biggest challenges as a player?

Growing up, I had been successful with the National Team and in college, but mentally I wasn't checked in. I thank Penn State and how they've molded me as a player. Erica Walsh, Ann Cook, Tim Wassell just said, "Cut the crap out. It's time for you to get your head on straight, and it's time for you to be as good as you can be." I finally got my act together my senior year, mentally. I still struggle with being positive all the time because obviously you want to be the best. You want to play your best game every game. And you're not going to do that every game. I needed to be okay with that, I needed to say -- "Hey, that wasn't your best game, but you have another opportunity on Saturday to change that." My mentality has come a long way -- it's night and day.

How do you cope with having been in the national team picture and then not?

It's easier said than done. There's days where you're like, "Why am I still doing this?" But at the end of the day, all of these girls, no matter who you ask, they want to be the best at their sport and they want to represent their country. We're playing here and this is our main goal right now. But they would be lying to you if making the World Cup roster wasn't their in their realm.

I truly rely on my family, my friends and the coaching staff back then at Penn State -- Erica Walsh was a huge mentor to me, and just said, "You're going to get your chance. All you need is one call up, one good camp, and you're in there." I try to just have the mentality through every game and when I struggle here, that's the same mentality that I use. There's a good platform in this league to represent at the national level, so it's just a matter of time, hopefully, that you get called up to the national team.

Have you considered playing overseas in the off-season? 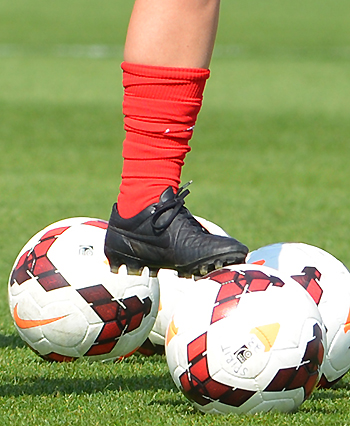 I've been in contact a little bit with teams overseas, but it's just so hard with six months on, six months off. It's not for lack of trying, that's for sure.

What is the story with the all black boots this season?

It's a little bit of everything. I have two older brothers. They were center backs so all the flashiness wasn't cool. Growing up I wanted to be just like my brothers. They don't make black cleats anymore, which is shocking. So I found a style of shoes that I like, and I said hey, I'm going to go all black this season and see what happens. And it's been the biggest turn around. Everybody is like, "Can I have your shoes? Where'd you get your shoes? Where'd you buy them?" I don't have a shoe deal so I make them with Nike ID. They're Nike Tiempos (without a decal) and I have ordered three so far this season...about to order my fourth.

Who is the toughest player in the NWSL players to go up against?

I've always thought Jess Fishlock is one of the toughest players to go against. I mean, she's crazy. I love her to death. She's that type of crazy that you want on your team, and you look across the field and you're like, "Oh crap. Fishlock's here."

Three words you associated with the Spirit:  Grit -- Fight -- Laughter

Three things you have to take on road trips: A friend, my dog, and I don't know...food?

TV show you have to watch: I'm really into Glee, which makes me sound really cool. I'm re-watching the series now. Something about it is just kinda catchy...And whatever's on ESPN!

Pre-game meal: When we're on the road, it's usually salmon and asparagus, something plain, not to hard on the stomach. When I'm home, it's something like chicken.

Post-game meal: Depends on how long the game went and how hungry I am! When we're here, I actually go get some chicken nuggets on the way home. 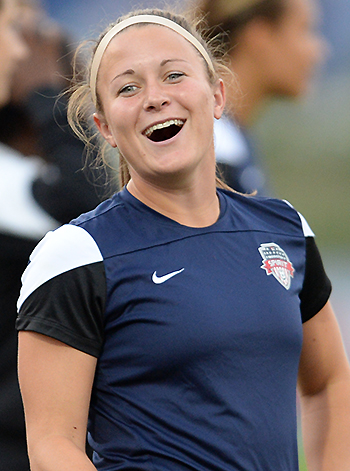