Tori Huster has been on the field for nearly every minute of the roller coaster ride that has been the last two seasons for the Washington Spirit, amassing 3,870 minutes -- the most for any Spirit player.

Next up is the team's first playoff appearance today in the NWSL semifinal against Seattle on the road at Memorial Stadium.

An invaluable combination of intelligence and physicality (à la Becky Sauerbrunn), Huster logged 1,890 minutes in the 2013 and 1,980 this season -- leading the team in each, scored a goal in each season, and played in all but three games over the two seasons for a total of 42 appearances. 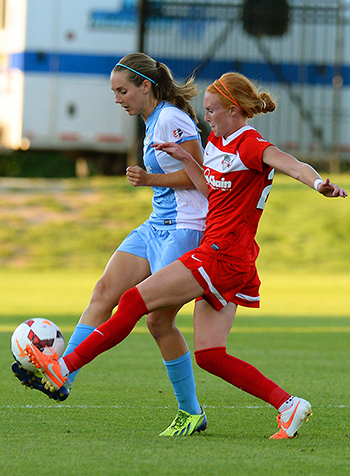 After primarily playing midfield in college (though she admits she did a fair amount of position-shifting there too), Huster was asked to convert to defense last season for the Spirit and ended up wining the team's defender of the year award, primarily playing center back. This season she again started in central defense, but moved forward to defensive midfield after Niki Cross arrived midseason.

"I don't know if 'assassin' is the right word, but I want to say 'silent assassin,'" said Washington Spirit head coach Mark Parsons. "You don't see her, you don't hear her. But she she's one of the most important pieces on our team because she gives us balance and that defensive rock in midfield."

A native of Cincinnati, Ohio, Huster was a four-year starter at Florida State University from 2008-11. She won numerous awards during her college career, and in 2011, led the team its fifth College Cup appearance. Huster's academic record was as impressive as her athletic one, at times carrying a 4.0 GPA and consistently garnering academic awards on her way to an exercise science degree.

Huster, now 24, also spent some time on the U.S. U-23 National Team, played two seasons in Australia's W-League (Newcastle Jets, Western Sydney Wanders) and has played for three clubs stateside in addition to the Washington Spirit: W-League's Boston Renegades and Colorado Rush, and the Western New York Flash in the 2012 WPSL-Elite season.

After over-achieving a bit in central defense last season, it's been the change to defensive midfield that has allowed Huster to really shine -- in a position that most teams have struggled to find the right player to drive success.

"If we can cement her in there and she plays there consecutively, I think she's got a real chance of growing massively." Parsons said, "I think the U.S Women's National Team are looking for a holding midfielder. The World Cup might be bit too soon, but going past that -- Tori has all the attributes and the potential to maybe offer a solution there in a couple of years."

I recently took some time with Huster to reflect back on her ride with Washington these last two seasons.

How different is this season from last year? 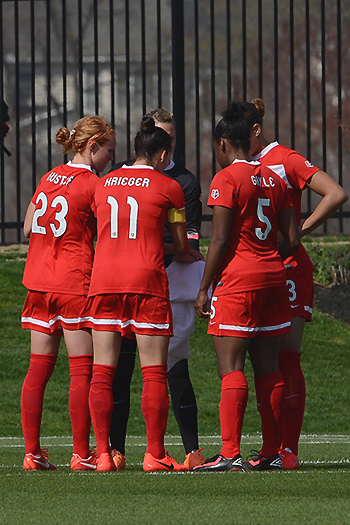 Very different. It is that same work ethic, which I think is one of the most positive things that we could have taken from last year. The ones that were here that are still here -- really just want to win so bad and just wipe that slate clean. And we did that. I think the people that Mark has brought have been great for us and have the same mentality. I think it's worlds different, but it was definitely a learning experience last year. I wouldn't change it. Those experiences are always great as a player.

Is it difficult changing between midfield and defense as frequently has you have in your recent career?

It's hard, as a player to change that mindset. But I think defensive center mid and center back are similar. The players that are around me make it way easier than wherever else I would be. Having a great support system around me makes it such an easier transition. But the coaches have been great. Watching film helps. I love midfield. So I'm happy to back in there.

I think my better qualities suit the role that their asking me to play. Not necessarily getting from box to box, but being able to hang with the number 10 players that are in this league. There is so much quality in the other teams in that role. It's a little bit daunting for me because they're these big name players and having to mark them, not necessarily individually, but if I can help myself help everyone else, then that makes my job easier. The people are behind me -- Ali and Niki have been great.

I'm definitely still learning. I played there in college and I feel like I still have so much to learn, and I hope I just keep improving game to game. 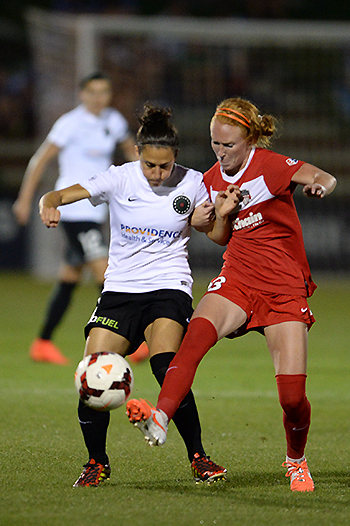 Who have been some of the hardest to go up against?

Vero is world class. Lauren Holiday is not easy to play against. You name it, the number 10s this in this league are just great. I can't focus too much on them. My best defense in my offense so if we have the ball, then they don't have it as much.

Do you plan to return to play in Australia?

The plan is do so. I'm still working out all the kinks in that. It's just strange working over email and all that stuff. But I'm trying to get all that straightened out. I definitely want to play in the offseason.

What is the Young and Brave Foundation and why did you get involved?

The Young and Brave is a foundation that started a couple years ago. It's two guys and one of their friends was diagnosed with cancer. People nominate a warrior, they call it, and then post a background story about the warrior. Then people can donate. The great thing about the foundation is that when you do donate, they don't take any of the donation for themselves. They're still really small. but they are trying to sell apparel and everything. 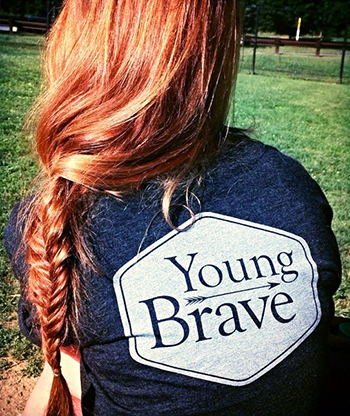 I got involved because a friend from my hometown who I went to high school with had gotten cancer. She's fine now, but she had eye cancer, which is very strange. I went through that with her. She fell across these guys on Instagram, got in touch with them, and they did a little writeup about her. I noticed on there they had some ambassadors and I said I'd love to help spread the word.

Three items you have to bring on a road trip: My cell phone, my dog, my best friend

Typical day off: Probably go to the dog park or the lake. She loves to swim. Otherwise, just hang out, cook a nice meal or have a nice meal cooked for me. 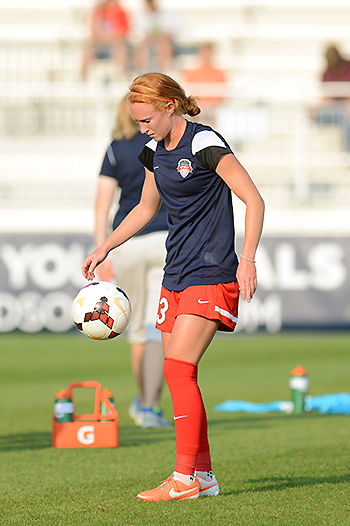