From Deutschland to Germantown: Perfect timing for Kerstin Garefrekes to try new league

On loan from 1. FFC Frankfurt, Kerstin Garefrekes arrived in Germantown, Md. earlier this summer, making make an impact immediately, and now a core member of a Washington Spirit squad challenging for the playoffs.

Share All sharing options for: From Deutschland to Germantown: Perfect timing for Kerstin Garefrekes to try new league

To put it simply, veteran German midfielder Kerstin Garefrekes is a champion. But if you didn't know it already, you'd probably never guess based on her humble demeanor that she is a essentially a German football legend.

Garefrekes has won two World Cups, a treble (Champions League, UEFA Cup, DFB Pokal), two European Championships, and two bronze medals while scoring 43 international goals during 130 appearances. She retired from the German national team in 2011, but her club career is certainly alive and well. Garefrekes was second in goals in the Frauen-Bundesliga this past season, scoring 18 for 1. FFC Frankfurt, her highest for the club since 2010. She has scored 151 goals in 201 appearances for Frankfurt since 2004.

But what Garefrekes, 34, has not done in her extraordinarily accomplished 15-year career is play for a club outside of her home country of Germany. Until this June when the German soft-spoken midfielder joined the Washington Spirit, that is. 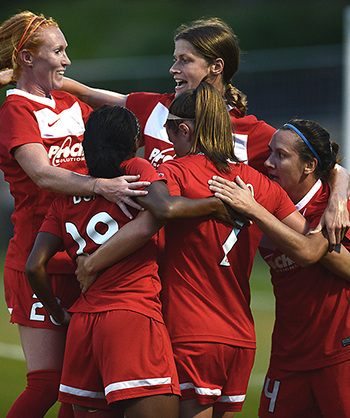 For the second season in a row the Spirit welcomed a German legend to the club, as Garefrekes followed the footsteps of former teammate Conny Pohlers, who played the second half the 2013 NWSL season in Washington.

"We needed someone who was going to be at her best when everything was on the line," Mark Parsons said of deciding to bring in Garefrekes. "Kerstin, obviously, is world class. Her movement, her intelligence, her touch, the things she sees. No matter what day, what weather, what game, what training -- she is at the top of her game."

Garefrekes scored her first goal for Washington last week against Kansas City. But her technical style of play paid dividends far before the goal.

"I can't speak enough about what she's brought to this team -- her experience, her talent, her composure on the ball," said midfielder Christine Nairn. "She gets the ball it's like, 'watch what I do and get in the box because I'll put it right on your head.'"

I spoke with Garefrekes to find out what her experience has been and learn a little bit more about the Deutsch Fußball-Legende.

What has your experience been like here with Washington and playing in the NWSL?

KG: It's a great time for me. I am so happy to be here and to be able to play on this great team. It's so much fun. It's different compared to Germany, but it's great.

How would you describe some of the differences?

How are you getting used to it?

KG: I think it's getting better each day.

How are you dealing with the schedule with so many games in such a short amount of time?

KG: That's a big difference from Germany, too. In Germany, we play every weekend, I think -- every Saturday or every Sunday. Here, the schedule is crazy for me to have three away games in one week and four games in 10 days. That's very exhausting. I don't really understand why is it's like that, but I'm sure there are good reasons to do that.

You're going to be ready for the Frauen Bundesliga?

Why did you decide to do this? This is the first time you've played outside of Germany.

Are you staying with a host family?

KG: Yes. They are a great family. They are so nice and cute. They take care of me. It's almost like at home in Germany. They have three kids but the youngest is 17 so not so little.

Was it nice to have a familiar face on the team in Ali Krieger?

KG: Yes, I've known her for six or seven years, and I played with her four or five years in Frankfurt. I know her very well -- she is very nice.

It sure looked like you wanted to get your first NWSL goal against another former teammate, Nadine Angerer, a couple weeks ago.

KG: Yes! There were a few good chances for me. But sometimes it's just a little bit to score or hit the post.

KG: Why not? I like it. I have enjoyed the time so why not?