Washington Spirit Update: Looking Back to the West, Ahead to the East

Washington finished its quick west coast road trip with a 1-1 record after loss to Portland on Sunday. The team now prepares for a return trip to Boston this weekend in NWSL action.

Share All sharing options for: Washington Spirit Update: Looking Back to the West, Ahead to the East

After a sold defeat of Seattle last Thursday, the Washington Spirit entered the less than hospitable confines of JELD-WEN Field and its 12,474 rowdy fans in Portland Sunday, hoping to turn some heads and come up with a second win in a row against the Thorns.

But before the match was even underway, the Spirit were dealt a blow as goalkeeper Ashlyn Harris failed a fitness test on her knee. Former University of Virginia goalkeeper Chantel Jones, who had been well tested during the Spirit's lengthy preseason run, would make her NWSL debut.

Washington controlled much of the tempo during the first half, with defender Ali Krieger pushing forward, nearly into a midfielder role. Krieger got off the team's best shot in the 31st minute, forcing Thorns goalkeeper Karina LeBlanc to make her best save of the match.

Portland broke the scoreless tie in the 41st minute when Allie Long found Christine Sinclair lurking nearly wide open in the penalty box, faced up to the goal. Sinclair sent a curling left-footed shot around left back Domenica Hodak and Jones for her third of the season.

After holding Portland scoreless through most of the second half, the Spirit yielded a final Portland goal in the 86th minute. On a quick counter, the Thorns took advantage of the Washington backline pushed forward past midfield. After three failed shots on goal, Alex Morgan put one away, giving Portland the 2-0 lead on her fourth goal of the season.

Falling to 1-3-3 with 6 point on the season, Washington did maintain its position in sixth place, while Portland is now 5-1-1 for 16 points and is tied with Sky Blue FC for first.

National Team Duty on Tap for US and Canada Internationals

Midfielder Diana Matheson and defender Robyn Gayle were called Wednesday up to compete for Canada in the June 2 friendly with the United States.

They join defender Ali Krieger and goalkeeper Ashlyn Harris, who will join the US Women's National Team in preparations for the match. A final 18-person roster will be announced prior to the match, but Krieger and Harris will both travel with the team.

The US will play again June 15 and June 20 in Massachusetts and New Jersey. Call-ups for those matches have yet to be named.

This is probably a good time to note that June 1-19 NWSL schedule is certainly looking to be in the Spirit's favor, as the club only has one (out of 13 overall for the league) scheduled during the time US and Canadian National Team players will be away.

Chantel Jones had six saves in her debut against two of the world's best strikers Sunday. She has been putting in many minutes of training time and it was good to see her get a chance. Perhaps, it was a shame it had to come on the road against a top team. But in many ways, it likely took some pressure off. It's a long season and I'm sure we will see more of Jones...maybe sooner rather than later.

The Spirit offense appears to be waking up just a bit, though I don't think anyone should get too out control in their excitement over scoring against a beleaguered Seattle side. But goals are goals and it's good to see some being scored by Washington.

Even though I've been calling for this, it's still somewhat troubling that defender Ali Krieger was the team's most dangerous player on offense the last two games. That was partially due to excellent pairing with Diana Matheson, of course. But Krieger cut through the Portland midfield and defense with such ease, her position could probably have been referred to as "Defender/Forward." If only there was another world class right back in the stable, Krieger could play a full game and right wing and we could really see how she and Matheson might wreak havoc.

I've given midfield Julia Roberts a little grief over the last few weeks. I think it's only fair to point out she had nice takeaway from Morgan on Sunday. The youngsters on the Spirit continue to play with confidence and don't appear to get overwhelmed very often. They make mistakes, but they keep their heads. I have to figure that is partially due to strong leadership among the veterans on the team. Any stop in play results in players like Robyn Gayle taking someone aside for what we'll call teaching moments. But every minute like that counts with a young team and it's encouraging to see the squad starting to take on the steady personality of its leaders.

The Spirit will again embark on a long bus trip to Boston Friday for the May 25 game against Boston. The last trek to Boston for the season opener included a 12-hour trip for frustrated players and was punctuated by a swap-a-roo by the bus company, leaving the team with a less than stellar bus (deemed the "evil Spirit bus") for the trip. General Manager Chris Hummer said this time around the team will travel on a "Team Sleeper" bus, which will lessen the blow of a day-long trip.

Boston and Washington have already met twice, each game ending in a 1-1 draw. The Breakers enter the weekend 2-1-2 for 8 points, but was shutout by Kansas City last Saturday on the road. So once again, Washington will be facing a team looking to avenge a tough loss, and will be playing its third road game in a row as part of a run that has the team playing 5 of 6 games away from home. 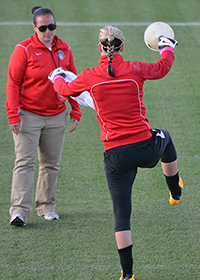 Per team policy, Hummer declined to officially comment on Ashlyn Harris' injury status until the official league injury report is released (likely Friday), so it is not yet clear if she will be available to play on Saturday. The team said Harris' knee issue on Sunday stemmed from a "knock" she took in the season opener against Boston. For those that don't remember, Harris collided with Boston striker Sydney Leroux late in the first half of the April 14 match. She apparently aggravated it last Thursday against Seattle, but I did see trainers testing it prior to the April 21 game in Washington. Perhaps after a few days rest over the weekend and early this week, she'll be able to start, but it's very possible Jones will make her second start on Saturday.

There are significant rumblings that former Breakers goalkeeper Alyssa Naeher, who has most recently been signed with Turbine Postdam in the Frauen-Bundesliga in Germany, will be back with the team soon. The team has not confirmed anything, so it's unlikely she'd be available for the match Saturday. Many were expecting this move and the team has left it's #1 jersey position open. Naeher's stock has been rising of late and is certainly in the ever-growing pool of keepers (along with Harris) pressing Hope Solo for her starting spot as the team makes it's run for the 2015 Women's World Cup.

The Spirit front office has said it would be looking to potentially sign a player based in Europe when those seasons are complete. No word yet, but the Division 1 Féminine (France) and Frauen-Bundesliga (Germany) seasons are now complete, making a host of players now available for partial NWSL seasons. While a player from "Europe," could also mean the Swedish, Danish or English leagues, their break from mid-June to early August wouldn't really provide much of a window for a player to go on loan. I suppose it could be someone completely a contract, however. I'll keep an ear to the ground on any Washington developments.

Playing Boston for the third time, I'd be remiss if I didn't mention Lianne Sanderson and the fact Washington couldn't keep her playing at the Soccerplex after playing for DC United Women last season in the W-Leauge. She has 3 assists on the season (tied for the league lead) and has been a reliable playmaker. While she may not have solved the Spirit's current offensive issues, she sure wouldn't have hurt them. Perhaps opting for youth will pay off in the future, and I personally enjoy the process of watching a young player develop over time. But it's hard not to think what if Sanderson and Joanna Lohman (also having a solid season) were both still playing in suburban Maryland.