Wednesday night is all Eastern Conference all the time, and Thursday night is all about the West. Over the next two nights, we'll narrow down the MLS Cup contenders to four, but coming into the second legs, all four match-ups are in the balance, with none separated by more than one goal.

Some of the first legs were cagey, and some were wide open. Some (well, most) had football (as in gridiron) lines marring the field, and some had less-than-attractive play on showcase. But damn if the story lines aren't pretty compelling coming into the second legs of the MLS Cup quarterfinals conference semifinals. Wednesday and Thursday nights, we'll wrap up this round and narrow the field to four. Read on to get ready for all four matches - though be forewarned that finding these matches on TV is going to be a bit trickier than the first legs. 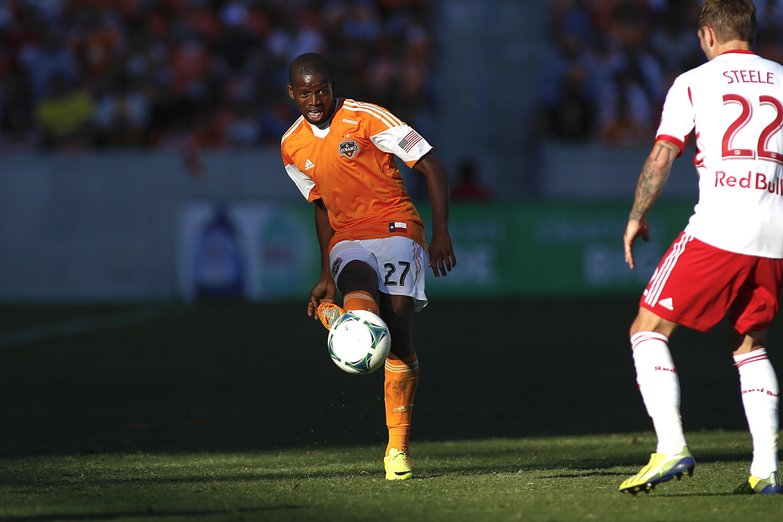 NYRB suddenly looks vulnerable despite hosting the second leg against the Dynamo, while Sporting KC hosts the Revolution needing to do what they've failed to do in each of the past two years: Win a home playoff game with their season on the line.

This tie looked all but done at halftime of the first leg. The Metros scored two first-half goals in Houston, and the Dynamo looked beaten. But then Dom Kinnear must have reminded his home side that they don't lose in the playoffs, and they came out and bossed the second half. Jamison Olave helped them out, of course, with his absolutely mindless tackle on Omar Cummings after Houston had pulled one back, earning a well-deserved straight red card in the process. Houston will be regretting not getting another goal or two in addition to their equalizer, but I'd still be wary of picking against the Orange, even as the tie moves to New Jersey.

Prediction: The Dynamo find a way. It might come down to penalties, but the overwhelming history of both clubs demands a Houston pick.

What Are You Drinking?: I'll have a dry white wine, the better to highlight the subtleties of the Metros' inevitable home collapse.

I did not expect the Revs to handle business like that in the first leg, but Jay Heaps' side proved me wrong, standing up to the Sporks and locking down a 2-1 result in the first leg. The question is how they'll handle protecting that precious lead as they move to Kansas City. KC hasn't been dominant at home, as clubs have tended to park the bus in front of the Cauldron, and Sporting hasn't been able to unlock opponents. Will New England go that route, or will they try to put the tie to bed with another goal or two. Either way, SKC should come out flying in front of their home fans.

Prediction: New England's young guns finally realize the stage they're on and melt under the lights (which is ironic, considering the lack of TV coverage) and KC's pressure. Sporks win by two to move on.

What Are You Drinking?: This one is going to have a lot of fouls and could rise to fisticuffs at any moment. Anything with Irish whiskey will be appropriate. A sour sounds good to me as I write, so that's what I'll say.

Jason Kreis proved himself pragmatic in the first leg, running out an incredibly conservative 4-2-3-1 to try and starve LA frontrunners Landon Donovan and Robbie Keane of space. It didn't work, as the Galaxy created several chances, on which they failed to capitalize. RSL were very lucky not to be down by more than the one goal by the time Kreis shifted back to RSL's usual 4-4-2 diamond formation. He won't make the same mistake twice, and RSL will try to boss possession at home while also preventing LA from hitting the counter.

Prediction: The accepted story heading into this one is that RSL can't win big games at home. So look for RSL to flip the script and run the Galaxy off the field. RSL by multiple goals.

What Are You Drinking?: I'll be back to my favored American whiskeys for this one - Temptation Rye, probably mixed into a Sazarac.

Surprise, surprise: the formation that worked so well against the Rapids failed badly against the much better Timbers. Seattle's much-vaunted switch to the 4-4-2 diamond, designed to free up Clint Dempsey to be Clint Dempsey, was spread out and torn asunder by Portland's width, and the Sounders were fortunate to find Osvaldo Alonso's late goal to keep a series victory within reach. It'll be a tough climb, though, as they have to travel to Portland and beat a streaking Timbers side by a goal just to force extra time.

Score after One Leg: Portland lead 2-1

Prediction: All Portland. They manage to hold possession without exposing their back four and eventually counter Seattle to death as the Sounders throw increasing numbers forward through the night.

What Are You Drinking?: I will say it is much harder to come up with four of these for a post instead of just my usual one - the things I do for you people. This game will make me very angry at the MLS scheduling folks come Friday morning. With that in mind, I'll take this game off and just have some water to make sure I'm at least hydrated come the morning.

Let us know your takes on the midweek action down in the comments. This is your home for pre-game, in-game and post-game playoff commentary and conversation.