With the start of the season around the corner, BlasianSays has some ideas about who to pick for your fantasy team.

With the start of the 2013 MLS season around the corner, hopefully you've joined the B&RU Fantasy League (private league number 7173-1471 -- now go thee forth and join!) Of course, you're probably reading this because you want a little insight into who the players are that you should consider adding to your team, so let's dive into it.

If you read the MLS Statistical Analysis last season, you probably will have gathered that I'm a bit of a stat geek. I know that statistics don't explain everything, but I think they help us see things in players and teams that might not be apparent otherwise. To start the season, I'm using a statistical eye to help bring things into focus, starting with goalkeepers. One thing you'll want to keep in mind is that it's easy to pick the highest scoring players for a spot or two, but where fantasy leagues are won is finding the most points for the least money in other positions.

You probably already know that you get $100 million to put your team together. Here's the list of presumptive starting goalkeepers, their teams, price, points scored last year, clean sheets, and points per dollar, sorted by points. 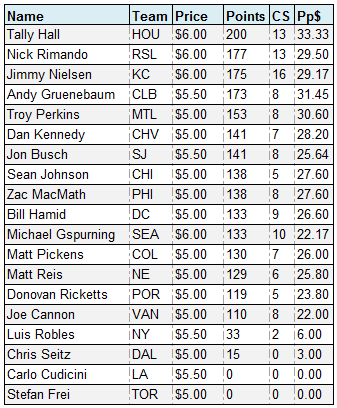 Tally Hall was the best fantasy goalkeeper in the league a season ago, and he's the same price as Nick Rimando, Jimmy Nielsen, and Michael Gspurning, who scored between 23 and 67 points less than Hall. Since there's only really $1M difference between the most and least expensive starting goalkeepers, there's not much use in trying to save money by taking a guy who's going to score less. Hall seems like an easy pick, especially when considering that the Dynamo return the same backline as they utilized down the stretch in the playoffs.

My advice: Take Tally Hall, and if try to save that $0.5-1M on the backup -- Greunebaum, Johnson or Hamid are good ideas, with Cudicini a wild card because the Galaxy defense is strong, even if he is creaky. Yes, I slated him on the podcast, but if it does turn out that he's good enough in MLS, he will end up being a decent value.

The rest of the way I won't be looking at the entire list of starters, because that's a lot of players to make a graphic for, so you'll see the top 15 scorers from each position, starting with the defenders. 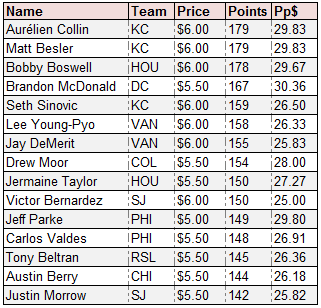 You'll notice that the top two scorers, and three of the top five are from Kansas City. You'll also notice that Brandon McDonald is the top player in terms of points per dollar value. Realistically you probably shouldn't be picking up more than one of the top 7 or 8 guys for your roster. Yes, $6M is not a large sum of money by itself, but when you're adding two or three of those guys when you can save a little for slightly less-scoring players, you end up giving up points elsewhere. Consider that the highest scoring defender has a lower high score than any other position -- 179 points would be 2nd and 21 points behind the #1 goalkeeper, 4th and 31 points behind the #1 midfielder, and 3rd and 29 points behind the #1 forward. Players for less than $6M that deserve a look to fill your defensive slots: Corey Ashe (HOU), Josh Williams (CLB), Matt Hedges (DAL). For the low risk ($4.5M), high reward folks, have a look at our own Chris Korb & Daniel Woolard, as well as Connor Lade and Kosuke Kimura from the Red Bulls, with a wait-and-see for Ante Jazic at Chivas.

On to the midfielders. Here are the best of the best: 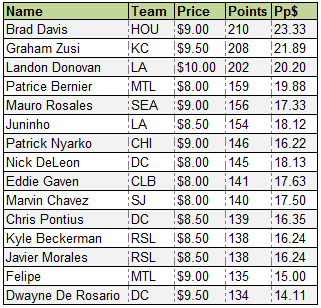 Brad Davis was the top point scorer overall last season, beating out Graham Zusi and Chris Wondolowski by 2 points. Oddly, Davis is cheaper than Zusi. Landon Donovan is taking a siesta, so if you want him, wait until he's back for sure.

I really like Patrice Bernier at his production and price, as well as one of Pontius or DeLeon, and also Marvin Chavez (SJ) at theirs, but if you decide to use $18M over two midfielders, you need to find value in the rest. Perry Kitchen is only $6M. Also have a look at Amobi Okugo (PHI), Brian Mullan (COL), Kelyn Rowe (NE), and Miller Bolaños (CHV), all either $6 or $6.5M.

Now to the forwards. The cream of the crop are as follows: 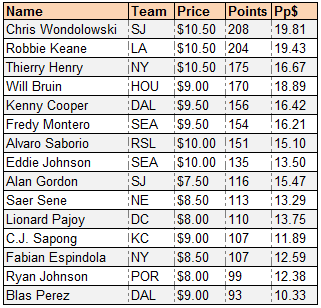 Despite being so close in production to Wondolowski a year ago, I would bet that Keane will not put up the same numbers this season. Beckham is gone, and Donovan's been loaned to a Buddhist temple until April, maybe, so Keane will have to shoulder a lot of the load, and defenses will be able to key on him. Wondolowski himself is a small risk because both Steven Lenhart and Alan Gordon are injured, and they were always around to keep a little of the heat off of Wondo. Fredy Montero is on loan, so obviously don't pick him.

I like Will Bruin, and have an eye on C.J. Sapong, who might have a lot to do in Kansas City, with Teal Bunbury recovering from injury and Kei Kamara in England, as well as Claudio Beiler coming in. Saer Sene is a decent value. If you're like me and you have spent $19M on two forwards, you need to find a third one on the cheap. Alan Gordon, if he comes back from hip surgery soon, is a great buy at $7.5M. Yes, the Quakes attacking third is crowded, but if you project Gordon's points to Chris Wondolowski's minutes, Gordon would have scored more than Wondolowski or Lenhart. Other value picks include Dominic Oduro (CLB) and Maicon Santos (if he starts, CHI). If you really want to reach, Kamani Hill (COL) had a high scoring efficiency (similar to Alan Gordon, but slightly worse) over just under 600 minutes. If he plays regularly, he has potential.

Now that we've looked over the whole league, let's look at D.C. United closely. This is a United blog after all... 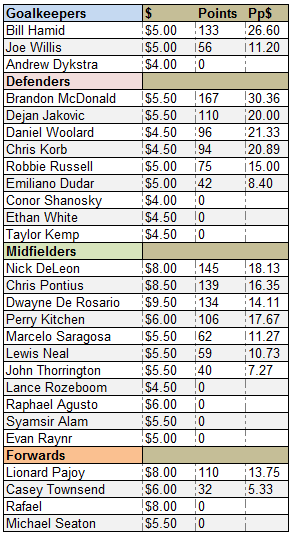 Hamid is the clear starter, so there's no question that he's the man to pick if you want our goalkeeper. McDonald was a high-scoring defender, so he should be preferred to his central defensive partner Jakovic. Woolard and Neal are great values if you want to save a buck. DeLeon and Pontius are both better on the dollar than De Rosario, and I've already recommended Perry Kitchen for his value. Saragosa is not worth consideration. At forward is likely to be Pajoy, but most United fans would tell you not to waste your time. What I haven't figured out is why Rafael costs the same amount of money. And who knows how much Carlos Ruiz will cost, for that matter.

Outside of the starters, there's not much to consider. Raphael Augusto may get some playing time, specifically if we're down and need some added offense. Robbie Russell be the first off the bench if/when Dejan Jakovic gets injured, but don't pick either of them unless they actually get playing time.

Now you can pick your team, or make changes to your already-picked team, with the confidence that if your team ends up stinking, mine probably will too.