For D.C. United to get another huge road result, they're going to have to dictate how the game is played as well as take advantage of some LA Galaxy weaknesses that Bruce Arena's side has hidden thanks to their ability to come from behind.

For D.C. United supporters, being frustrated about our August schedule dates all the way back to this past winter. While those complaints calmed down a bit after a suspected CONCACAF Champions League fixture early in the month ended up involving the other two teams in Group 4, the month remained brutal on paper. On top of being the District's most humid month, August involved three of the four semifinalists from last year's MLS Cup playoffs, multiple mid-week games, a home game against our hated rivals from North Jersey, and of course tonight's match in California against the LA Galaxy.

It's that last game that really stuck in United fandom's collective craw. United's second game of the season was originally this one, but MLS opted to move the game into this trickier date to allow LA a better shot against Club Tijuana in the CCL quarterfinals. Any chance of United fans cutting the league some slack over the decision was ruined when los Xolos turned a 1-0 first leg deficit into a 5-2 aggregate win.

Despite some knee-jerk perceptions that this move was an example of MLS choosing one of their pet clubs over United, the rescheduling was nearly as inconvenient for the Galaxy. Both sides ended up with seven matches to play in August, after all. Sure, LA's slate of games was nowhere near as difficult, and five will take place at the StubHub! Center (one is an "away" match against Chivas USA), but seven games in August is tough regardless of who you end up playing. The official editorial position of Black and Red United is that LA Galaxy complaints are most likely unjustified and hilarious, but just this once they might actually be justified.

Moving past the "on paper" side of things, the Galaxy have put together some odd results this month. On one hand, the league-wide perception is that LA is heating up and looking good. I'm not sure this holds up over their past five games, though. While LA is 3W-1D-1L in that span, the loss was a 4-1 beating sustained in Columbus and the draw was at home against a mediocre San Jose side. Even their 4-3 win over Colorado doesn't really look that good when you consider that LA was down 2-0 and 3-1 to a team they should have no trouble with.

The perception really owes more to their form in July, when they beat RSL and Seattle - the latter 3-0 at CenturyLink Field - as well as destroying the Revs 5-1. In August, they've had to repeatedly paper over some real cracks. Ignoring their win on the weekend over Vancouver - the Whitecaps basically showed up happy to lose 2-0 - LA has conceded eight (!) goals in the first 33 minutes of August games. Their good record over that span is down to their ability to score second-half goals (they have seven in those same matches), but repeatedly having to come back to get results is not sustainable for any team.

The Galaxy spent some significant time playing out of a diamond during the middle third of their season thus far, but they've been in the flat 442 for about two months now and are highly unlikely to change back for this game. There will likely be some rotation within that overall structure, though, as LA is also on their second of three games this week. 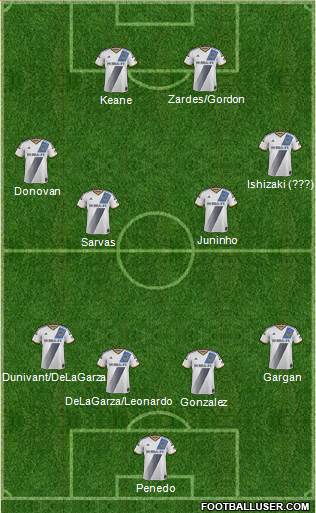 The left half of the defense likely comes down to three players. Robbie Rogers has been getting attention due to his overlapping role at left back, but he's likely only going to be available off the bench for this one. Bruce Arena would likely prefer to use AJ DeLaGarza at center back with Todd Dunivant on the left, but Dunivant's 2014 season has been blighted with injury. He has been making appearances of late, but it's hard to start a defender that you can't guarantee is fit to play 90 minutes. If Arena can't use Rogers or Dunivant, he'll have to keep DeLaGarza at his third-best position while starting Leonardo, who is prone to some awful decision-making and loses focus too often to be trusted. In other words, let's strongly hope for Leonardo to start.

In the midfield, the only real question is on the right. Stefan Ishizaki missed the game against the Whitecaps due to an injury, but Arena says he's likely available tonight. Here, Arena has options. Baggio Husidic played this spot on the weekend, but was wincing on the bench and receiving treatment when he was subbed off. Gyasi Zardes has been doing well as a striker, but LA has pushed him back to right midfield a few times due to a glut of forwards available off the bench.

Alan Gordon is likely fresh and fit to play 90, so don't be surprised if Ishizaki is withheld for Chivas on Sunday and Zardes ends up on the right. On the other hand, United is by far the better team, so Arena's rotation choices might be based on who his second-choice players are more likely to beat.

The main way the Galaxy beat teams is by giving themselves space. Their home playing surface is among MLS's largest, and LA wants to use every inch of it. The teams that get repeatedly stretched out against the Galaxy are the ones that lose to them. Landon Donovan is the best American ever at playing in transition, Robbie Keane turns even small pockets of space into danger, and Zardes has gotten progressively better at using his speed to make a big impact.

To prevent the Galaxy from controlling the match, they'll need to stay compact and organized without simply sitting deep and hoping to defend for 90 minutes. A big factor here will be how the Black-and-Red uses the ball. If United is good at keeping the ball moving and avoids careless turnovers, it will be easier to stop LA from making use of all the space available. That use of the ball will need to be paired with a high level of spatial awareness and strong communication. LA is great at sensing when their opponent is taking a play off or has one person who isn't focused.

The center of midfield is vital in any game, but tonight it will be particularly important. For once, United will get a straight-up 2v2 battle here. Juninho and Marcelo Sarvas undoubtedly have the advantage in terms of skill with the ball, but Perry Kitchen will have an even larger advantage in terms of strength and athleticism. What United will want is to force central midfield to be a street fight rather than a chess match. This again comes back to keeping the field small; the more space United gives up, the more difficult it'll be for Kitchen and Davy Arnaud (or LEWIS NEAL!) to get stuck in on a regular basis.

On the offensive side of things, United should constantly look to attack Leonardo if he gets the start. Even if Leonardo is held out, the left half of the Galaxy defense is the weaker side. Dunivant at 33 has lost the quickness to keep up with most opposing wide men, while Rogers doesn't yet have ten professional starts at left back. If DeLaGarza is at center back, United should look to get likely starter Eddie Johnson around him often. DeLaGarza is a very smart player, but EJ will have size and speed advantages here that should be put to good use.

On the other side, Dan Gargan tends to commit a lot of fouls whenever he gets beaten or finds himself isolated. He'll be suspended with his next yellow card, so United ought to test him 1v1 a few times. Chris Rolfe will be able to outsmart him and force Gargan to either give up fouls in dangerous spots or get beaten. As much as United should try to test the other side of LA's defense, they shouldn't neglect the other flank.

Set pieces are going to be interesting. On the defensive side of the ball, United has a huge worry on their hands due to Omar Gonzalez, who has scored twice this month. Gonzalez is not just a big target, either; he's deceptively quick, and LA has put in work to create picks and confusing rehearsed movements to free him up. Zardes and Leonardo provide the secondary threats.

On the other side of things, I think the Galaxy can be had when United gets corners or free kicks. They can be a bit disorganized and too reliant on winning their man-marking duels. Gonzalez, Leonardo, and Zardes are their only regulars with size; the rest of the team is under 6' tall. With EJ likely back in the fold, one of United's best targets is going to draw a marker that they can beat time and again. This could be especially important if United can impose a slower pace with fewer chances.

In the end, this is a huge challenge for United. LA is a very different challenge from Sporting, and playing a mid-week game on the other side of the country - even if United simply went from KC to California - is a physically difficult task. LA's ability to stretch the field out often forces teams to do a lot of defensive running, and tired players make the sort of mistakes the Galaxy exploit. However, they still have major defensive issues that United has the quality to take advantage of, and the mid-week game factor is mitigated by the fact that LA is in a very similar boat. If United can keep the game narrow, there's every chance they can put up a second straight statement win.