Last year, this was a horrible fixture pairing two deplorable teams. In 2014? It's a match between the two best points-per-game teams in the Eastern Conference. Toronto FC's counterattacking style is going to be tricky to overcome, but United might still have some advantages in this one.

In the past, a trip to face Toronto FC would usually be viewed as a great way for D.C. United to bounce back from a home loss in the league and a Cup upset. Thanks to the World Cup break, United will enter this match without having won or even tied a game in twenty-four days. Regardless of the number of games involved, that's a long time to have to dwell on a lack of recent success. This isn't 2013, where a win three weeks ago felt like yesterday. Playoff teams don't go nearly a month without posting a W.

This year's TFC is a different story, however. The Reds have started 2014 with the best stretch of results in club history, and their 21 points over 13 games is good enough for the best points-per-game in the Eastern Conference. That they've pulled this off missing Michael Bradley during the World Cup and having only gotten ten games out of Jermain Defoe so far bolsters the claim that a sea change is going on up in Ontario.

Ryan Nelsen's side may actually be in their best run of form right now. They're unbeaten in their last six MLS games, and are scoring just under two goals per game over that stretch. There are no big wins in this 3W-3D-0L run; in fact, their one two-goal win required a 95th minute goal to pad out the lead. Still, winning matches by a goal is what good teams do in leagues all over the world, and that's that TFC is relying on.

So TFC is no longer the joke they once were, but they come into this game having played mid-week and dealing with some player availability issues. Their 1-1 draw in Chicago against the Fire involved playing over an hour while down a man after Moore was sent off. Brazilian striker Gilberto, last seen scoring a rocket of a free kick goal after nearly coming to blows with Defoe, has a hip flexor strain and is out for tomorrow's game. Bradley is supposed to be back in Toronto for the game, but there's no certainty about whether he'll play after covering more ground than anyone else in the World Cup.

Despite all this, and tomorrow's game being the end of a Saturday-Wednesday-Saturday spell of games, there has been little rotation. Mark Bloom, Steven Caldwell, Justin Morrow, Collen Warner, Jackson, and Defoe have all played 180 minutes this week, with Jonathan Osorio playing 177 and Dominic Oduro 155. On top of that, the last hour in Chicago was played with ten men; in that group of players, Osorio is the only one to get any rest, and it was all of three minutes. Despite going down a man on the road and having a lead to protect, Nelsen opted to use just one sub, which baffled TFC fans as well as just about everyone else.

All of this makes the normally predictable TFC lineup trickier to call than normal. We'll still be seeing a 442 - Nelsen is the least likely to tinker boss in all of MLS - but the players chosen and the positions they're used in might change Toronto's normal style: 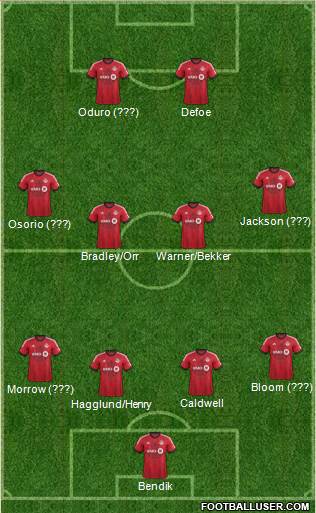 Stay with me here, because where there are a ton of possibilities in the above lineup, we're not talking about twenty different possible starters. In the back, Caldwell will start alongside either rookie Nick Hagglund or Doneil Henry. Henry was kept on the bench against Chicago due to a knee injury, which indicates that it was a minor issue. If he can return, Nelsen might do well to move Hagglund to right back so that Bloom can rest. Bradley Orr is also an option at both spots, though he has been used in central midfield over the past month or so. At left back, meanwhile, Ashtone Morgan could possibly be given a rare (in 2014 anyway) appearance to prevent Morrow from breaking down due to overuse.

Further forward, the suspension of Moore and injury for Gilberto leaves Nelsen with few options on the wings if he elects to move Oduro up front. if Dwayne De Rosario is given a shot against his old team, Nelsen will probably use Oduro at right midfield and either Jackson or Osorio on the left. If Oduro is preferred as a striker, Nelsen more or less has to play Jackson on the right and Osorio on the left.

In central midfield, Nelsen isn't so limited as he is on the wings. Warner probably needs a break, but even if Osorio is needed on the left and Bradley is given a (much needed) rest, TFC can still field Orr and Kyle Bekker in the engine room. My guess is that Nelsen will throw Bradley right in and might well ignore Warner's tired legs and leave him in as a starter, but any pair from this group of four is a possibility.

While there may be some stylistic differences - particularly if De Ro starts as a withdrawn forward rather than Oduro, who will push higher - Nelsen's overall gameplan is the same in all circumstances. On the road? TFC plays on the counter. At home? TFC plays on the counter. Playing a road game at Estadio Azteca? Counter. Home game against a local u-9 team? Counter. The Reds are to counterattacking what Real Salt Lake is to possession or Sporting Kansas City are to high pressure.

It's a simple plan that works because TFC has crazy attacking speed. Defoe has made his living based on his pace, and on top of that his runs off the ball are superbly timed. Oduro has been arguably MLS's fastest player for years. Jackson isn't quite as fast as either of them, but he's still pretty damn fast. That kind of speed means that TFC doesn't need to connect a bunch of passes to create danger. Any midfielder that gets the time to pick his head up will invariably look for a long pass - through ball or lob over the top, doesn't matter - first and foremost. If TFC were a boxer, they'd lead with their haymaker rather than work the jab.

This puts the opposing midfield under pressure, but not the kind of pressure we usually talk about. To beat TFC, you need to constantly harass their midfielders so that the opportunity to spring a break never pops up. It takes tremendous discipline and focus to make sure the Reds aren't getting that half-second on the ball over and over and over again. Compounding the issue is that chasing people all over the midfield requires the defense to compress the space with a higher line...the sort of line that will leave United's back four with no chance of recovering if Defoe or Oduro is running onto the ball and into space.

Going forward, United needs to solve the final ball issue that dogged them last week. Seattle is a stronger defensive team than TFC, but the Sounders came to RFK looking for a shutout and sat deep as a result. TFC's counterattacking style presents the same general problem, and if Bradley plays they'll have the soccer IQ advantage in central midfield (provided his legs don't just fall off) to help with that. I'm on the record as wanting to see Chris Rolfe playing as a second forward while Fabian Espindola is out, but whether it's Rolfe, Luis Silva, or Collin Martin in that spot the issue is the same. United needs to find a way to get that player into space, and that player needs to deliver in terms of creativity and execution.

Against this Toronto side, I'd look to make that happen on the dribble. Rolfe has proven that he can get past his man 1v1, and TFC has had trouble with guys capable of doing the same (e.g. Harry Shipp and Justin Meram, both of whom have scored against the Reds in recent weeks). Hoofing crosses in seems foolish, and not just because United is generally not good at crossing in the first place. It's also not the best way to beat the TFC back four.

Along with that emphasis on the dribble, United should look to give TFC a taste of their own medicine and put Eddie Johnson in behind a few times with an early ball. Caldwell would have no chance in a footrace with EJ, and Henry's penchant for giving away penalty kicks - he's been whistled for four this season - is an indicator of the young center back's lack of judgment in key moments. TFC will probably sit deep enough to make this easier said than done, but if the opportunity ever arises United needs to take advantage.

TFC needs to be made to run all game long.

In terms of tempo, United should keep things moving at a reasonable clip. TFC will be the tired team in this one, and they're also going to cede possession (remember our last visit to BMO Field?). Nelsen's side isn't particularly interested in having the ball all that often, but since they're going to be on short rest that plays against them provided United makes them work hard. If, as in the link above, we see a DC side connecting a ton of passes but playing at a plodding pace, then the advantage of being well-rested is wasted. TFC needs to be made to run all game long.

In terms of set pieces, TFC's main threat is probably Henry, though Orr and Caldwell are the sort of brave and determined players that are hard to keep under wraps. The Reds aren't an elite set piece team, but when they do score it's usually because the service and runs are all aimed right into the center of the goalmouth. They're not big on the Dynamo-style glancing header at the near post, or even a Davy Arnaud vs. NYRB back post finish from a near post flick-on. TFC's method is to create enough of a traffic jam that someone gets free right on the doorstep. Bill Hamid is going to need to use his size and strength to push through the obstruction attempts, while United's defenders need to do some obstructing themselves to keep Hamid's path to the ball clear.

At the other end, I think TFC can be had a bit, particularly if Henry marks Bobby Boswell. Henry is not the most attentive player, and Boswell has preyed on such pairings throughout his career. Assuming Steve Birnbaum gets another start over Jeff Parke, we could also see Toronto struggle to find someone that can contain him. He should be itching to set things right after sending a free header wide in the 90th minute against the Sounders, too. And that doesn't even mention Johnson - who should really be treating corners and free kicks as big moments given his one total goal this season - or Kitchen, who are also targets that TFC won't enjoy trying to mark.

Overall, this is a tough but winnable game for United, even without Espindola. TFC's counterattacking style makes them a tough opponent, because they're looking for the easiest and least risky way to create offense. However, their being tired and short-handed needs to be something United makes them pay for particularly after being unable to do so against Seattle, who were in the same boat last week. As much as this seems like a mid-season game during the World Cup that isn't that important, the fact is that it's a conference game between two teams occupying playoff spots. United could make a big statement by notching a road win over a good team for the first time this year.