D.C. United's defense of the US Open Cup will start in Rochester against the Rhinos of USL-PRO. Rochester has struggled to score all year, but has relied on a stingy defense to maintain a playoff spot in league play. Can United take advantage of Rochester's unforgiving schedule?

In the recent past, D.C. United has not really had to extend itself in US Open Cup openers. Since a deflating 1-0 loss to the Harrisburg City Islanders back in 2007, United has had a harder time getting into the USOC - navigating fellow MLS sides in the rather silly qualification process that has been scrapped - than actually getting through that first official game. Sure, the Richmond Kickers took United to penalties last year, and to overtime in 2012, but the only time DC wasn't in the fourth round draw was in 2011, when the Black-and-Red failed to qualify for the tournament proper. In Cup openers from 2008 to today, United has conceded just one goal in 510 minutes.

The Rochester Rhinos, who will host United tonight at Sahlen's Stadium, have their own history with the tournament. They're the only non-top flight team to win the Open Cup since MLS began play in 1996, a run justifiably called "legendary" due to a streak of four straight wins over MLS teams. The Rhinos are among the small number of lower-level US clubs that can cite numerous Cup upsets in their past (though admittedly it has been a while).

This year's Open Cup looked to be proceeding in a normal fashion, with Houston and San Jose edging to home wins with a mix of starters and second-choice players last Wednesday night. That trend came to a crashing halt Saturday, however: the Atlanta Silverbacks - with head coach Eric Wynalda in attendance, if you were wondering - harried Real Salt Lake all night before snatching a 92nd minute winner; the Carolina Railhawks went toe-to-toe with Chivas USA before eventually advancing after a farcical penalty kick tiebreaker; and most deliciously, the New York Cosmos demolished the Red Bulls 3-0.

The results aren't necessarily what we should focus on here, though. Watch enough soccer and you'll see the odd string of upsets happening all at once. What was worth noting from where I sit - and not just in the NASL-over-MLS upsets - was that the lower-division teams weren't particularly fearful once you take away Houston's win over the PDL Laredo Heat. Carolina and Chivas were very even, while both Atlanta and the Cosmos relied on high pressure as the main ingredients in their win.

Rochester is perhaps not the most likely team to step high and harass opponents - head coach Bob Lilley appears to have set his side up to play on the break in numbers - but they come into the game in an odd place and may change tack. The Rhinos have played nine of their fourteen league games on the road thus far, and their home record (1W-2D-2L) indicates that they have struggled to carry play.

On the other hand, adopting a more aggressive stance might not be physically possible. While United has been enjoying a World Cup break, the Rhinos are dead in the middle of a grinding stretch of five games in eleven days. The first two of those games were out west against the Galaxy's in-house USL side and Arizona United, and this weekend Rochester will play on both Friday and Sunday. Every USL team has to endure spells like this - playing games in clusters like this can help keep travel costs down - but it doesn't allow much for high-pressure play.

Rochester's current form is something of a mixed bag. Defensively, they're very solid: Since the start of May, they've posted four shutouts and have only given up ten goals in twelve matches (league and Cup). Over that span, they've gone unbeaten in four games against Orlando City, the Kickers, and LA Galaxy II (the top three teams in the USL-PRO standings).

On the other hand, the Rhinos are scoring just one goal a game in the same set of matches, and their recent 3-2 loss at home to Pittsburgh gave the Riverhounds their only win of the season thus far. In USOC play, Rochester has played two home games but was pushed to extra time by both the Western Mass Pioneers and Reading United (both of the PDL). Things like scoring goals and being the dominant team just haven't come easily to the Rhinos this year.

After watching a few Rhinos games in the past couple days, I have a handle on how they like to line up. Lilley appears to prefer a 4141 that looks similar to what we see out of the New England Revolution, with goal-hungry wingers being just as likely to provide the scoring threat as anyone else.

However, Brendan Doherty over at The Bent Musket mentioned a 4231 being on the cards, and he follows the Rhinos regularly. Given some personnel issues we'll get into later, this is my best guess at their lineup: 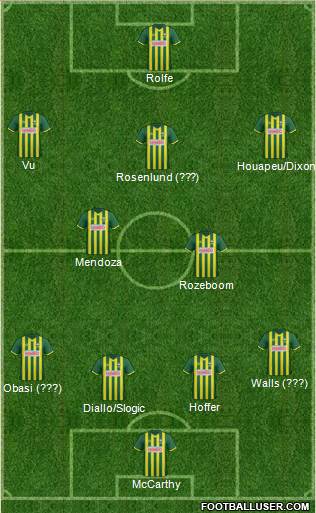 This is not quite Lilley's preferred eleven, but it's pretty close. The biggest name missing for Rochester is JC Banks, who is unlikely to play due to a knee injury. Banks has over 30% of Rochester's league goals this season, which only compounds their issues going forward. Tyler Rosenlund - once of Toronto FC - and Johnny Mendoza will try to replicate the runs out of midfield that Banks offers, but neither is really the sort of #8 who provides a regular goal threat from midfield.

In the back, goalkeeper John McCarthy and defenders Tony Walls and Kyle Hoffer are sure to start. Hoffer hasn't missed a game at center back, while Walls - who played for the Chicago Fire in 2012 - has been Lilley's Swiss Army knife across the back this season. With right back Pat McMahon questionable and left back Onua Obasi recently coming back from a week off, my guess is that Walls lines up on the right. Like most utility players, Walls isn't the best with the ball. Instead, he will rely on his high-end athleticism throughout the match, meaning that United should probably look to beat him with combination play or individual skill rather than simply trying to run past him.

The other defensive spot will likely go to one of Rochester's pair of towering center backs. 6'6" Patrick Slogic spent the preseason with Sporting Kansas City, but I think we're slightly more likely to see 6'4" Babacar Diallo after Slogic's mistake gave Arizona the game's only goal this past weekend. Of the two, Diallo is faster both in terms of straight-line speed and lateral quickness. If Slogic plays, United should attack him on the dribble throughout.

Further forward, on-loan midfielder Alec Sundly has been a regular but will instead be in Richmond with the Revolution to face the Kickers. United will have to watch out for Lance Rozeboom, who will be eager to prove that the Black-and-Red were wrong to let him go during the 2013 preseason. For the Rhinos, Rozeboom drops deep to pick the ball up off the center backs and sees a lot of touches as their midfield metronome. Making life hard for him will be key, because Rochester will likely want to keep the pace slow given their heavy legs and shortened bench.

On the wings, former Philadelphia Union man (and one-time United trialist) Levi Houapeu has been second choice to Houston Dynamo academy product Alex Dixon. However, Dixon is dealing with a foot injury and may not be able to start. In both cases, we're looking at a winger with plenty of speed and a direct style, but both players can lose focus and are somewhat lacking in the defensive department. On the left, Minh Vu is a clever player who has the speed to run down the touchline but can also cut inside and combine. Assuming that Banks is out, he may be Rochester's key player on the night.

Up top, Colin Rolfe - no relation to Chris - is the sort of player United fans are all too familiar with: the non-scoring target forward. In league play, the Louisville product has precisely zero goals in 720 minutes of action. Rolfe's only goal in 2014, in fact, is the goal that got the Rhinos into this fixture. His 119th minute goal on a set piece from Mendoza saw Rochester past Reading last month, and he's probably a bigger threat in the box on set pieces in general than he is from open play. Rochester will look to use Rolfe's big frame to hold the ball up with his back to goal more than anything else.

The surface at Sahlen's Stadium is Fieldturf, and watching their last home game I can confirm that it looks very rough. It plays quickly, which is never an easy adjustment for visiting teams to make. United should emphasize playing to feet in the early going to get a feel for the surface before trying too many balls into space as the game goes on.

With Rochester coming into the game with heavier legs, it will be up to United to make sure they control the pace of the game rather than letting the hosts dictate the tempo. I mentioned earlier how teams that applied pressure have had success in this fourth round of the Cup, and I think that might be a strategy that pays dividends. Rochester's defenders aren't the most comfortable on the ball, and pressure will also reduce Rozeboom's ability to influence the game.

High pressure might be a strategy that pays dividends.

However, high pressure doesn't just happen in a vacuum. United will need to watch out for raids down both wings, and Rolfe's ability to hold off the center backs or flick the ball on in the air would grow in importance if United plays higher up the field. In those circumstances, we'll need to see a dominant display by whichever set of center backs Ben Olsen chooses. If United can successfully press high up the field while also ensuring that Rolfe has a poor outing, there's little to stop the Black-and-Red from setting up camp in Rochester's half.

I've already noted that Rochester will rely on their wingers as their main goal threat, but shutting those players down may come down to winning the central midfield and cutting off their supply line. We know Rozeboom can pick a pass, but Rosenlund and Mendoza are good distributors as well. United will need to make sure those players are forced to keep things short and sideways rather than switching the point of attack or playing balls from deep that free up the wingers.

We always close with set pieces, and tonight will be no different. Rochester's goalscoring troubles point to a team that will see corners and free kicks as big opportunities. With Rolfe, Diallo (or Slogic), and Walls on the field, they'll have some dangerous targets available. It seems safe to assume that the Rhinos will be placing a big emphasis on their set piece chances, so United needs to match or exceed their intensity and focus in these moments. Rochester's defensive strength means that going behind 1-0 from a set piece is the scenario most likely to see United lose this match.

At the other end, United has been good at creating opportunities from their set piece looks. Even if some players are rested, a player like Steve Birnbaum could be a real asset. It's unlikely that Rochester has faced a player like him in these situations, and if Olsen also rolls out starters like Bobby Boswell, Christian, Perry Kitchen, and Eddie Johnson, the scales strongly lean United's way. Set piece goals are a great way to break a bunker, which might be what is required tonight.