In which I humbly promise to do my best not to overuse the term "cutting edge," of which the Black-and-Red have none.

It was true last game against the Columbus Crew, and it's true again this week against Toronto FC: D.C. United lost this game in the midfield. Unlike the season-opening debacle against Columbus, though, it was not the wide spaces that will dominate our discussion today. This match was lost in the central zone, where Toronto were able to find Michael Bradley and Jonathan Osorio, who keyed their frequent counterattacks, one of which created the game's only goal when Bradley put Gilberto in behind and Bill Hamid came up big with one of his five saves only to see Jermaine Defoe finish in the ensuing chaos.

That was far from the only breakout the Reds enjoyed on the day, though. Ryan Nelsen's gameplan, similar to that he used last week in Seattle, was simple: defend deep and break with speed on every chance. This direct, vertical style - which is actually nothing like the direct, vertical style used by the San Jose Earthquakes - defined Toronto's attacks, no matter whether they originated from turnovers or restarts. Indeed, it wasn't a counter attack in the traditional sense that led to Toronto's goal, but rather a long free kick from Julio Cesar, which Toronto brought down in midfield.

Bobby Boswell and Jeff Parke are bearing a lot of the blame for that goal and for the several other chances that Defoe and his teammates conspired to create and then spurn, but the largest share of fault lies further up the field. On the goal sequence, Perry Kitchen gets sucked up toward Jonathan Osorio, who's already sandwiched by two markers and has his back toward Bill Hamid's goal. When Osorio manages to touch the ball five yards to Bradley, who is facing upfield, Kitchen is in no position to reach him in time - a lesser player, maybe, but not one with the vision and quick decision-making we know Bradley has. Two touches later, Gilberto is in on Hamid.

Kitchen has to know that jobs 1-4 are keeping Bradley from getting into that situation. Yes, Boswell screwed up when he dropped deep to keep Gilberto onside (though it was close enough that Parke's failure to step forward may have kept the Brazilian onside regardless), and yes Boz should have done better with his rushed clearance after Hamid's initial save. Sure, Hamid might have done better to hang onto the ball, and Parke should have found Defoe's run instead of giving up on the play. As for Franklin, he just got unlucky to see the ball slip between his legs - he actually got himself into exactly the right spot on the play.

But none of that should have mattered. Kitchen's mistake in the midfield led to this cascade of errors, and it was poor play in midfield, both on offense and defense, that kept United from really having a chance to win. The basic numbers themselves aren't bad. Kitchen and Luis Silva combined on 90 successful passes with a 73% completion rate, out-doing Osorio and Bradley's 61 completions (70%). But it's the types of passes these were that make the difference. For all the possession United held - almost 60% through the game - los Capitalinos managed a mere three key passes to Toronto's nine. In the midfield, the Red's central two recorded four key passes to Silva and Kitchen's one (which came off a short corner). Basically, if Bradley and Osorio are finding the likes of Gilberto, Defoe, Jackson and Alvaro Rey on the run with any kind of regularity, the way they were on Saturday afternoon, it's only a matter of time before somebody converts.

Meanwhile, Eddie Johnson once again had a measly three touches in the box. That stands as a completely separate indictment of United's midfield play, as he needs to be the centerpiece of the offensive game plan if the Black-and-Red are to have any hope of making his acquisition anything other than a mistake for all parties involved (save for the Sounders). What's weird is that EJ is plenty involved with the game - he had more events recorded by Opta than any of TFC's attacking four. But because DC's midfield is completely unable to get any traction, he is forced to check back to receive the ball, seemingly every time. Meanwhile, there are precious few runs for him to find, and so nearly all of his passes are lateral or negative. He's not getting the ball in the box, where he can finish, and he's not getting the ball in space, where he can go at opponents. It's always 30 yards from goal, running the wrong direction, with a defender draped all over him. So many things about this have to change. 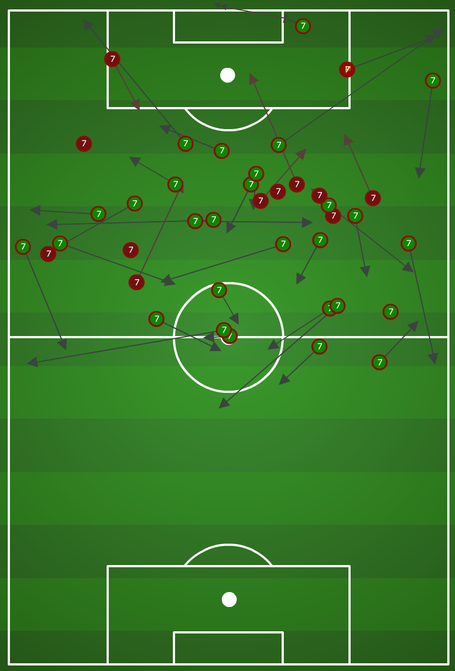 This game, when put against United's performances over the last two years, is an illustration that tactics do not equal style. Ryan Nelsen ran out a 4-4-2 with high-and-wide attacking outside midfielders and a double-pivot. But it couldn't have been more different from Ben Olsen's double pivot of late 2012 and most of 2013. Toronto FC care not a bit about possession, but they play with purpose, looking to break even from goal kicks. Their fullbacks stayed at home, and their double pivot looked to get the ball forward to one of the attacking four on the run. When one of the forwards checked back, the other would make a complementary vertical run in behind to receive a flick-on or to benefit from a dummy or combination. It's deceptively simple, and it can be stopped. But trying to stop it with your back four and 'keeper is just playing with fire. To really beat TFC, you have to win the midfield. For the second straight game, D.C. United lost that battle and, with it, the match.