Preseason Laboratory: I want to see D.C. United experiment with the 4-4-2 diamond this preseason

With the Black-and-Red set to start playing preseason games this week, we asked the B&RU editors what formations they'd like to see the team look at. In the first response, from Managing Editor Adam M Taylor, we look at an RSL-style 4-4-2 diamond.

Share All sharing options for: Preseason Laboratory: I want to see D.C. United experiment with the 4-4-2 diamond this preseason

On Wednesday, D.C. United will take the field in Bradenton, Fla. in their first of several preseason games they will play throughout the month of February. Preseason, of course, is a time for Ben Olsen not only to get players accustomed to one another and get into game shape but also for him to learn what each player brings to the table and the best way to deploy those assets on the field. Over the last couple seasons, we've seen Benny rely largely on a hybrid 4-4-2/4-2-3-1 system that uses two deep-lying midfielders in the middle, two attacking outside midfielders and (usually) a withdrawn forward/central attacking midfielder underneath an out-and-out striker.

But there's nothing that says that has to be the case in 2014. In fact, the personnel at his disposal is jut begging to try something else out, something we haven't seen over any stretch of games since Olsen's first full year as a head coach, when the roster was much less suited to it. I want to see a return to the 4-4-2 diamond.

And by that, I mean a proper, narrow diamond, where the outside midfielders are "wide" in name only. I want to see Benny look into aping Real Salt Lake's fabled formation, which deploys those outside midfielders not only more narrowly but also deeper, in more of a shuttling role than an attacking one. It's also a system more similar to the ones Olsen played under when he wore #14 than the nominal diamond he ran out as a coach. Olsen's system from parts of 2011 more closely resembled a 4-1-3-2 and used those outside mids less as auxiliary CMs and more as wingers, with responsibility to get forward and isolate opposing fullbacks rather than combining centrally with the #6 and #10 spots.

Before I get into the details of why this would actually work for United, here's the lineup I'm envisioning, if everything goes to (my) plan: 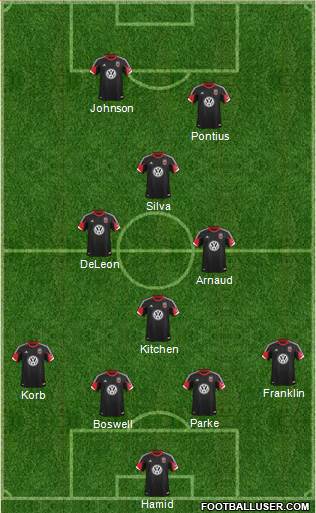 Okay, here are some things you need on the field for the 4-4-2 diamond to work:

But it's not just the starting personnel that this system would match. It also fits in surprisingly well with our Next XI: 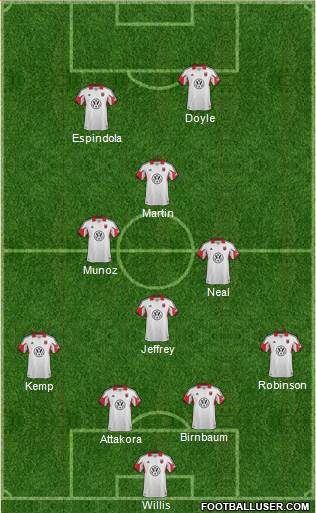 You can swap out like-for-like at any position on the field, albeit with some question marks and some drop in quality at a few spots. But just as many of these guys will be pushing for starter's minutes at the beginning of the season - I'm looking at you, Jared Jeffrey, Steve Birnbaum and Fabian Espindola - and others should be pressing hard for time as they mature - think Jalen Robinson and Collin Martin.

Here's my rough 3-deep depth chart (with some necessary overlap) with this formation:

This would be a robust formation in terms of player personnel. If we lose players to injuries or to national team call-ups or to squad rotation during periods of fixture congestion, we'll still have bodies to turn to who (generally) don't obviously not belong on the field in MLS. Fabian Espindola and Jared Jeffrey would get the most minutes off the bench, but you'd expect Steve Birnbaum to force his way onto the field for cup matches at least. Granted, a few of these names are likely to spend more time on the Richmond Kickers' roster than on D.C. United's, but they'd also be available for recall if needed with the first team.

So, we get to the real question: would this work, better than Benny's favored 4-2-3-1? I have two responses: (1) I think it would, yes; and (2) that's why I want to see it in preseason - to find out. It accentuates a strength United had last year (keeping possession) and addresses weaknesses that the team had, namely overlapping fullbacks and advanced central midfielders leaving the center backs exposed, lack of cutting edge in the attack, being forced to attack on the wings and send in crosses with no real targets in the box, and... well, the list just goes on and on. And on. And on and on.

Possession. Generally speaking, crowding the center of the park tends to help your possession numbers, as you have more bodies with which to disrupt the opponent's passing and more potential recipients and combinations to make yourself. This puts 4 players in that central zone, outnumbering virtually every other system in this part of the field. RSL have utilized this to their advantage, hoarding the ball in most of their games, even when they aren't even really thinking about attacking.

Exposed Center Backs. While United have swapped out basically all their center backs who got time last year for new ones, the problems we faced last year will still be there if no tactical changes are made. Having three more deep-lying midfielders in the central lateral third of the field is just the kind of tactical change that will help screen the back four when United turn the ball over. As I said in the last paragraph, just the numbers make it harder for countering opponents to find passing lanes through the middle of the field, and the deeper positioning - particularly for the d-mid - means there's at least one extra body closer to our defensive third who can help break up a counter. (The other tactical issue we saw last year, fullbacks who were too often stuck up-field at the same time, is an adjustment we need to make regardless of what system is run on the field.)

Cutting Edge. Luis Silva came to D.C. United on fire last season, scoring three goals in his first three appearances for the Black-and-Red. Then he started playing more as a forward, higher up the field, and his numbers dwindled. Part of that was the fact that he only had one player in front of him with whom to combine, and part of it was the lack of support around him. The diamond puts more bodies closer to him and at more favorable passing angles than playing him as a second forward would. For one, there would be two forwards ahead of him, and multiple teammates in the central zone around and behind him where he could release pressure. Then, as the defense pinches inside, you have a fullback overlapping on the weak side to take advantage of that space - and that's a pass Silva (or DeLeon, Arnaud or Kitchen) can make any day of the week. You'd also have the opportunity for DeLeon or Arnaud to make late runs into the boxd or for Kitchen (or Jeffrey) to take shots from distance when the ball pops out. In any event, this type of system certainly couldn't be any worse for United than last year.

Enforced Wing Play. Last year, United were forced to commit insane numbers forward to get any traction in the attack, but precious few of those bodies were ever stationed near the opponent's goal. While the withdrawn forward was pulled into the midfield to help with possession, the lone striker - whether it was Dwayne De Rosario, Lionard Pajoy or Conor Doyle - was often out near one of the touchlines, working to overload one side to work a cross directed at... a center back or the 'keeper. With the diamond, the midfield 4 move across the field as a unit, negating the need for a forward to drop too far too often or to spend too much time out wide. But even if one of the forwards does move out of position (a la Fabian Espindola in his RSL days or Joao Plata more recently), there's still another one in the box to be on the end of a combination or a cross. But unlike last year, the numbers in the middle and the extra man up front make it more palatable to play through the middle, rather than being forced wide time and again.

Basically, this formation, if implemented correctly, should be good for what ailed us last year. It puts players who we've used in wide attacking midfield roles, like Nick DeLeon and Chris Pontius, into roles that arguably better fit their respective skill sets. It fits the rest of our personnel, both first choice and reserve. And I think it also resonates with the fan base of D.C. United, who have been demanding attacking soccer since more than a decade before Seattle invented it in 2008. It's something Olsen should be familiar with, and it's a formation that has proved successful in the league very recently - if I recall correctly, RSL have more cumulative season points than any other team in MLS over the last five or six seasons. Now, a lot of that is on savvy personnel choices, but their personnel fit the system Jason Kreis implemented. Right now, so does United's.

Now, if there's a big glaring hole here, it's the fact that Luis Silva is not Christian Gomez or Javier Morales, and if there's one person the diamond can be too reliant on, it's the guy in that #10 position. But Silva checks a lot of the boxes that a modern trequartista needs to have. He's got touch and vision. He's mobile enough enough to move into wider positions when that's where the space is and clever enough to find little pockets of space in the middle. At the very least, if Silva's on the field, it's as likely as not to be in a #10 role, so let's use part of the preseason to see whether it's worth building a system around him and (when need be) Collin Martin.

If it doesn't work it doesn't work, but I think it will. It has the potential to make United more stable defensively and more potent going forward. In any event, we won't know whether it's a viable option unless we give it a shot. That's why Ben Olsen should run out a 4-4-2 diamond on Wednesday against Toronto FC.

Look for more tactical demands suggestions from other members of our staff as the week goes on. In the meantime, take to the comments to share your thoughts on the potential for the 4-4-2 diamond to succeed at RFK this year.