Let's Talk About the Midfield - Jared Jeffrey vs. John Thorrington

On the back of his strong opening performances for the Black-and-Red some fans are calling for Jared Jeffrey to start over John Thorrington, who plays a similar position a bit differently. Let's look at their styles and have it out over who should be starting alongside anchorman Perry Kitchen.

Share All sharing options for: Let's Talk About the Midfield - Jared Jeffrey vs. John Thorrington

Ever since Jared Jeffrey was acquired via waiver draft at the start of the international transfer window that closed yesterday, Ben Olsen has been faced by a dilemma he hadn't faced in 2013: real competition for a pivotal position on the field. With injuries to guys like Marcelo Saragosa and Lewis Neal, D.C. United has been criminally thin at central midfield, with realistically only John Thorrington to partner anchor midfielder Perry Kitchen.

Jeffrey's arrival and his positive performances in the middle have forced Ben Olsen to make a decision about who to run out in the center of the park, and over the last four games, he's given three different answers, using every possible combination of his three starting-quality center-mids. United have won two and lost two of those games, but for the three most recent games, they have looked much better - particularly in the attack - than they have at any other point this year, even the games where Jeffrey didn't appear.

So, besides having a third man available for selection, what changed? Let's look at some recent chalkboards for Jeffrey and Thorrington to see how they play. First up, Johnny T: 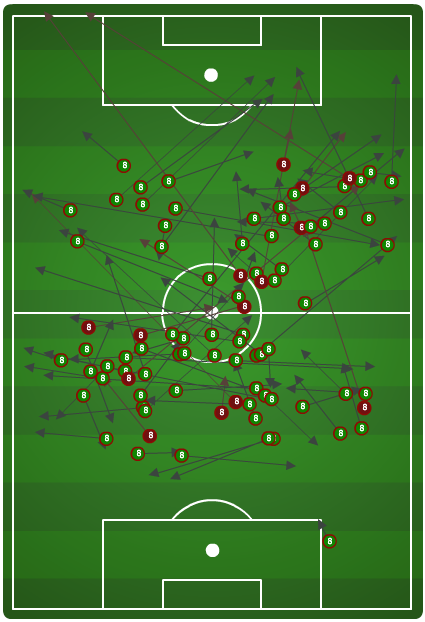 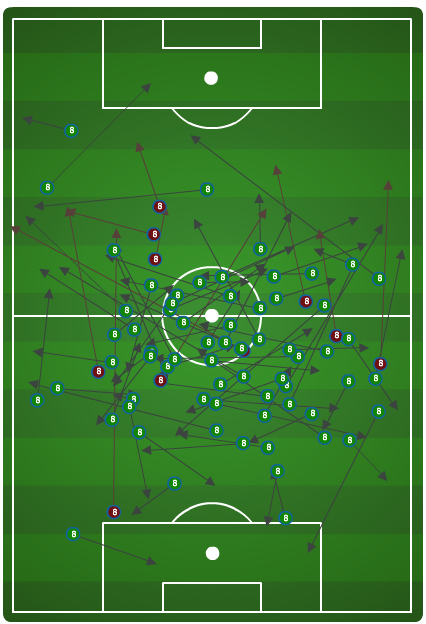 The first chalkboard is Thorrington's passing in the 4-1 loss in Chicago last month, and the second is his passing against New England in United's 2-1 home loss. Next up, Jeffrey: 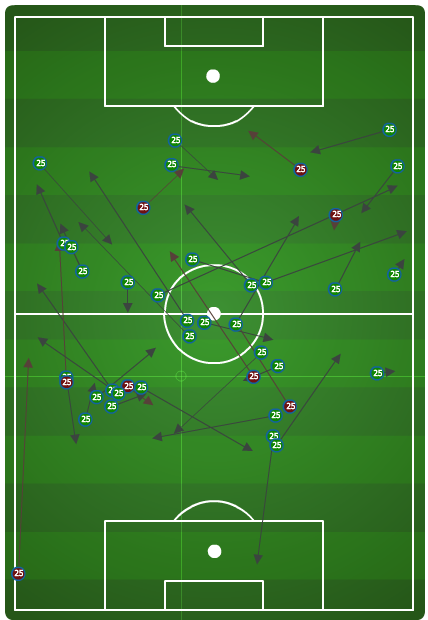 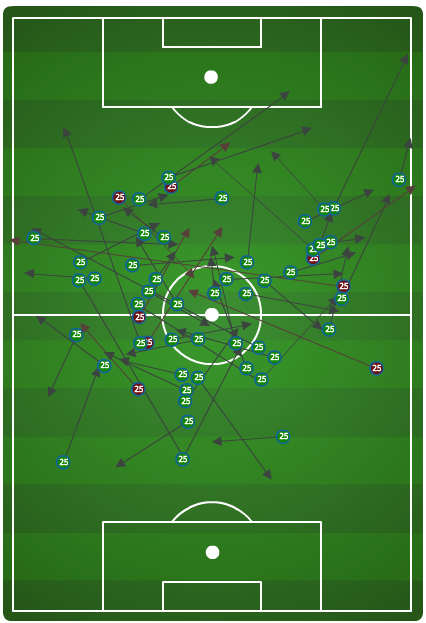 The first is Jeffrey's passing performance against New England, when he actually partnered with Thorrington, and the second is the 3-1 win against Montreal.

A few things jump out right away. First, Thorrington tends to be much more involved than Jeffrey, attempting a lot more passes and creating a much denser plot. Second is how much shorter Thorrington's passing attempts tend to be than Jeffrey's. Don't get me wrong, JT attempts his share of 20- and 30-yard passes, but he's got a lot of 5-yard balls, as well; Jeffrey has the longer ones, but much fewer short attempts.

There's a pretty straight-forward explanation for this: Thorrington has typically played as the deepest midfielder when United is in possession this year - even when paired with Perry Kitchen (but more on that in a minute). Thorrington likes to pick the ball up off the feet of our central defenders, starting possession moves. Jeffrey, on the other hand, has played higher up the pitch, facilitating possession and making himself available as an outlet before spraying the ball ahead for Luis Silva and United's other attackers. These differences - Thorrington's attempting more and shorter passes - predictably results in his having attempted a higher pass completion rate than Jeffrey.

Now, I'm not going to characterize one approach as better or worse than the other - they're two somewhat different roles in the system. But the real implications of the difference in style between JT and JJ come from how Perry Kitchen plays as a result. Oh yeah - we've got more chalkboards: 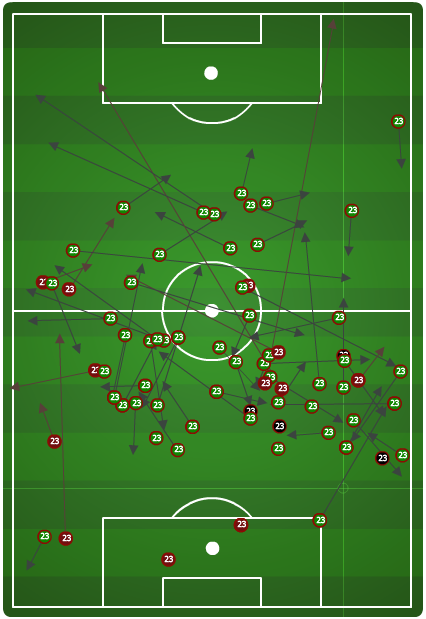 That's Kitchen's game (passing, as well as defensive plays) against Chicago last month, that 4-1 loss. If you compare it to Thorrington's passing chart above, you'll notice that Kitchen is pushed to the outside and higher up the field by JT's central presence deep in the midfield. And that only makes sense; if JT's occupying that space, Kitchen is going to have to move elsewhere. 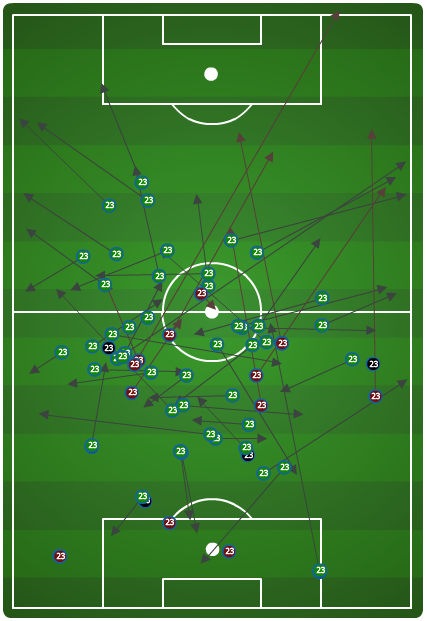 This is Kitchen in the win over Montreal, when he partnered Jeffrey. Because Jeffrey plays a bit higher up, Kitchen all but camps out in the zone ahead of United's back four, moving the ball back and forth between the sidelines. It's a simpler game than the one he had to play in the 4-1 loss to Chicago, where he had to play a more dynamic attacking game higher up the field. Kitchen's undeniably got the tools to play that sort of game, but he tends to look better to my eye in the deeper role he played in the win over Montreal.

And even though Benny opted for Thorrington in this week's US Open Cup semifinal against Chicago, I think he might agree. Here are JT and Kitchen's chalkboards for that one: 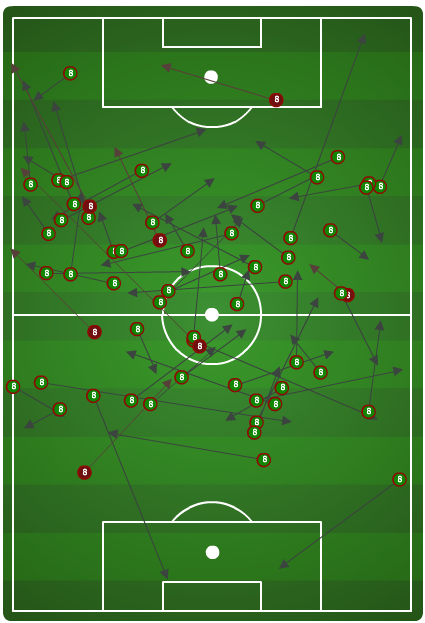 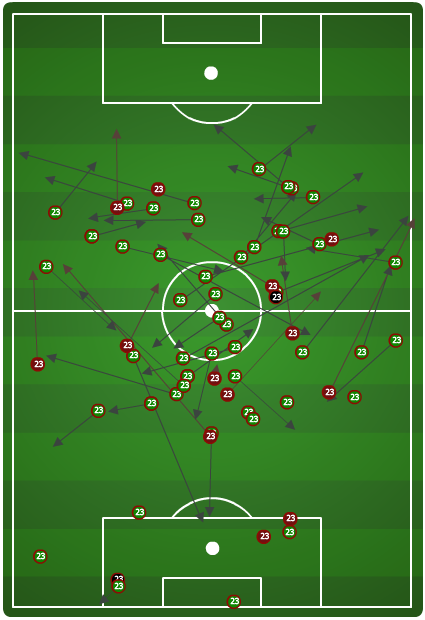 United were strong enough offensively in this game that both players got to move around a lot - that'll happen with more than 55% of the possession and a two-goal lead for nearly half the game. But the difference from the previous match at Toyota Park is stark. This time, it's Kitchen who has more touches in the deep central part of midfield, while Thorrington has somewhat fewer touches, which are also generally further upfield. The result couldn't be more different, either: a five goal swing, from a 4-1 loss to a 2-0 win.

Ultimately, I think the question I posed at the outset of this post is probably a false one: both Johnny and Jared are capable of partnering Kitchen successfully, as the results show. But their best use is, while in possession, to let Kitchen be Kitchen and take the burden of playing a dynamic, box-to-box role off his shoulders. This results in a better attack, as Kitchen is slower of thought when higher on the field than either Jeffrey or Thorrington, and a better defense, since Kitchen is a more effective screen and better cover for the defense than either of the other two.

While the personnel question may still be a toss-up, the same is not true of the style. Earlier this year, when the Black-and-Red had no creative spark whatsoever and nobody who could run the team's attack, we needed John Thorrington to start possession moves for us, if only to prevent the center backs from launching the ball straight to the other team or from making a costly turnover in our own end. But it wasn't enough, and United lost entirely too many games for me to think about. Now that los Capitalinos have welcomed Luis Silva to the group to create some offense and banished Brandon McDonald to the salt flats of Utah to stay far, far away from any goal we might be defending, that tactic wasn't serving any purpose.

It was clear pretty quickly once Jeffrey got into a game that, whether he's a better fit for the side than JT or not, his style of play was more successful than Thorrington's had been to that point. And so we saw Thorrington adopt Jeffrey's style against Chicago in the Open Cup game, to great effect, and I hope that's what we continue to see going forward: Kitchen anchoring the midfield while somebody else plays the box-to-box, hard-tackling (Holden-esque?) role ahead of him.

But that still leaves the question, who should play in the midfield for D.C. United? Should it be Jared Jeffrey or John Thorrington partnering Perry Kitchen? Should Kitchen even be in the XI at all - or should JT and JJ instead partner one another as they did against New England? Should Olsen be more flexible and reactive, choosing his starters based on the week's training sessions and who the opponent is? Vote in our poll and have your say in the comments.