D.C. United vs. Toronto FC Chalkboard Doodling: So many passes!

United dominated everything but the scoreboard against the Reds, and the chalkboards back it up. What else do they tell us about the Black-and-Red's latest disappointment?

Share All sharing options for: D.C. United vs. Toronto FC Chalkboard Doodling: So many passes!

We're trying out a new feature here at B&RU. I'm going to try and look over the Opta chalkboards after matches going forward to see what we might have missed in our initial assessments of the matches. My first foray into this sort of article was earlier this month, when we looked at the effects of running out different combinations of central midfielders. Hope you enjoy it.

It's not been a frequent occurrence in 2013 that D.C. United get a draw and feel disappointed. It's also not often that any team in MLS, controls 61%+ of possession in a game, but that's just what happened on Saturday night against Toronto FC, as the Black-and-Red attempted almost 500 passes to the Reds' less than 200. United was more accurate, too, completing 83% of their passes while Toronto was accurate only 73% of the time. The end result it lots of data points on Opta's chalkboards for United players, just because everybody got on the ball to attempt a boatload of passes, the great majority of which were accurate.

Just for fun, let's start with a look at United's attempts at Joe Bendik's goal: 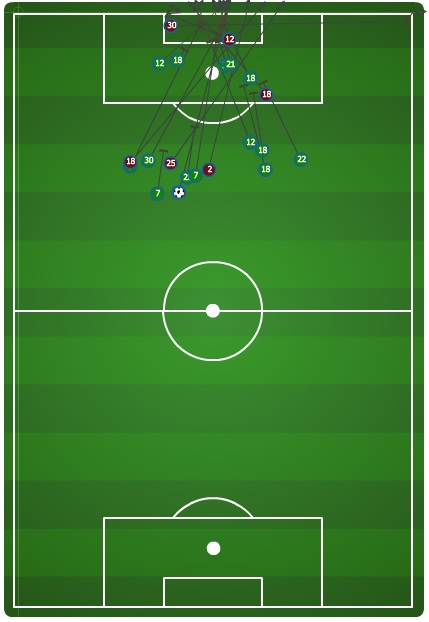 This kind of tells me that despite their gaudy possession and shot numbers, United didn't actually do a very good job of creating real scoring chances on Saturday night. Thirteen of the 21 shots came not just outside the box, but well outside the box. Granted, a few were on target, forcing Joe Bendik into a man of the match performance, but in the long run, long distance shots are never as likely to score as attempts from inside the box, and I would have liked to see the balance reversed, to favor more attempts from inside the penalty area. (I do note the irony that our two shots from inside the 6 were both off-target. If that's not our attack's season writ small...)

One surprising note from the game was just how accurate nearly everybody was in possession. Despite the rarity with which they can find the final ball, and ignoring the defensive side of things, our fullbacks had a very tidy game: 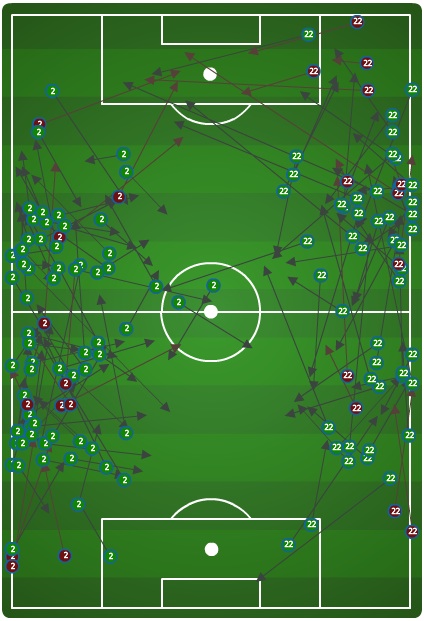 Chris Korb and James Riley combined to pass at better than 80% for the game and - as should be expected with the kind of possession numbers we saw - both got forward into the attacking half quite a bit. Given the chaos that it wrought on the Toronto back line, I would have liked to see more touches, especially from Korb, deep in the attacking third - recall that it was his combining with Nick DeLeon and getting to the endline that set up Luis Silva's spinning scissor kick volley - the save for which will almost certainly be nominated for Save of the Week (even if it won't win, thanks to this bit of ridiculousness from Jaime Penedo). As bad as their crossing can be for long stretches, Korb and Riley might be the best wide service United has, if only because when they get the ball that far forward, we have more bodies in the box and hence more targets to find.

Since we've spent some time on it in the past, let's look again at the partnership of Perry Kitchen and Jared Jeffrey in this game. 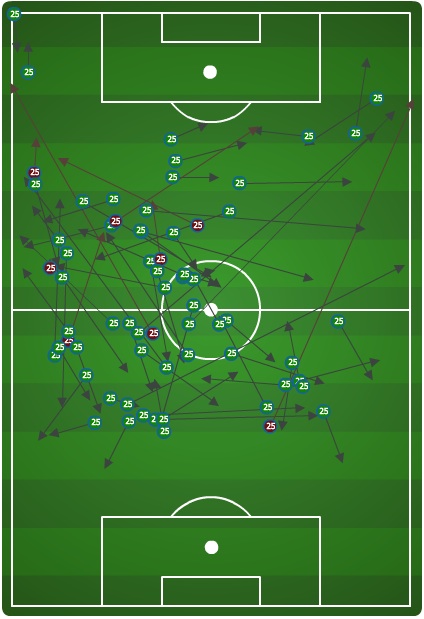 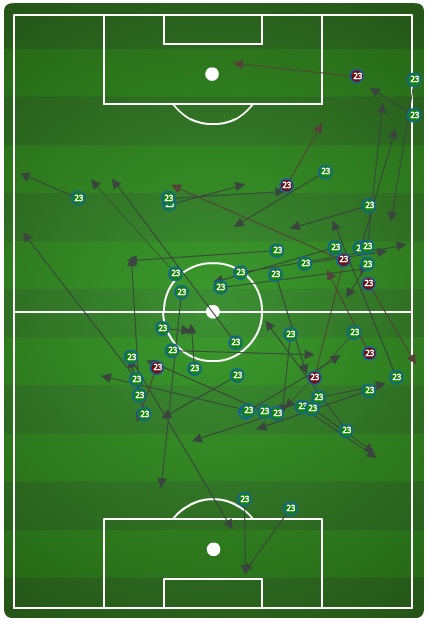 The first is Jared's passing attempts, and the second is Kitchen's. Right away, it jumps out that rather than playing a combination where one is more forward than the other, they look more like a flat left-and-right central midfield pairing: most of Perry's touches were on the right half of the field, and JJ tended toward the left half of the field. Kitchen did have some passes deeper in United's half - probably when he filled in for a marauding fullback on either side - but he popped up well into the attacking half of the field pretty regularly too. It might be a pet interest of mine, but I'm planning to keep an eye on how Olsen has his engine room come out and how the different arrangements perform. Both of them passed at around 85% accuracy during the game, which is pretty nice, especially considering that Toronto was attempting to press the midfield fairly heavily through the first hour and also considering how open the game was (making for longer, riskier passes) for the last third or so of the night.

I'll try soon to have a look at Dwayne De Rosario's play and that of Conor Doyle out wide vs. up top. For now, though, what's caught your eye from the 1-1 draw? Let us know in the comments.