The initial reaction to Claudio Bieler's goal against D.C. United was that blame could be spread around equally among roughly half of the team on the field at the time. A closer analysis reveals that, in the words of George Orwell, some were more equal than others.

Eighty-eight minutes into what turned out to be a gut-punch of a 1-0 loss, D.C. United looked like a team that was going to get a shutout. The performance wasn't going to be one to crow about, to be fair: A decent first half had given way to a second half that consisted of little beyond defending, and that despite Sporting Kansas City lacking in the execution department. The crowd at Sporting Park was getting antsy, quickly booing cramping United players (both of whom were quickly subbed off, rather than this being a play-acting situation) and the referee for giving a very obvious booking to Chance Myers.

Peter Vermes had replaced his team's most attacking midfielder with a forward, and pulled his defensive midfielder in favor of another attacking midfielder, but the "kitchen sink" approach had only caused KC to look disorganized. In fact, the most notable moments in the minutes before the goal were all United attacks: Daniel Woolard nearly played Carlos Ruiz in behind; Matt Besler produced a top-notch block after Perry Kitchen's intelligent long ball let Marcos Sanchez to cut the ball back for El Pescadito; and Ruiz's bicycle kick that eventually resulted from the ensuing corner kick.

Like most teams that are lacking their best soccer on a given day or night, KC didn't end up winning this game by virtue of great skill. Sure, Claudio Bieler deserves credit for his evasiveness and for having the composure to find a gap while in what was a space about as large as a phone booth. Soony Saad also deserves a nod for being alert to a loose ball and for getting his head up to spot Bieler rather than blindly crossing. Still, the goal that undid United's hopes was much more down to a series of mistakes by the Black-and-Red; KC was just sharp enough to take advantage.

In real time, the goal looks straightforward enough: A giveaway, an attacker more alert than a defender, and three defenders all somehow not marking up on the opposition's leading scorer. We've all seen this one play out; many of us have been one of those defenders at some lower level.

However, I think it's instructive to really look into this goal, because the surface impression lessens the blame on some guilty parties while also leaving a stain on the performances of some players who didn't deserve it. Also, I'm a total masochist when it comes to this stuff, and figure I might as well let some people join me in being miserable about it.

Like most goals, it started innocently. Chris Korb's long throw-in from rather deep down the United right was aimed at Lionard Pajoy, but went a bit long and was headed skyward by Besler. The ball fell to Graham Zusi, who one-timed the ball backward to Myers, who in turn went all the way back - from midfield - to goalkeeper Jimmy Nielsen. Nielsen's hopeful long ball forward went over the head of Saad and bounced to left back Seth Sinovic, who was closely marked by Korb.

Sinovic attempted to go 1v1 with Korb, but Sinovic has nowhere near the dribbling skill to fake out Korb. After some half-hearted shoulder feints, Sinovic ran out of room at the endline and Korb got a touch. The ball bounced between the two of them until Marcelo Saragosa, who had arrived on the scene to double up Sinovic and make sure that he didn't somehow surge into the box, blocked an attempted pass back and controlled the ball from there. Saragosa was boxed in by Sinovic and Saad, but managed to calmly pass the ball to the backtracking Sanchez in some space.

This is where things start to go wrong.

Sanchez is put under intense pressure by Sinovic, Saad, and Joseph, with Joseph in particular almost shoving Sanchez over. Sinovic chose to close off Sanchez's passing lane to Korb, opening up the chance for Sanchez to take a touch backward into the only open space available to him. So far, so good.

The pass that followed by Sanchez is where a mundane play going nowhere becomes a goal. Sanchez - a player gifted with good technique that has no doubt come from thousands of hours of practice - underhit a pass that he would get correct 99 times out of 100. The intention is a good one: Sanchez was trying to lay the ball off without a bobble or with too much pace, so Saragosa can safely thump the ball up the line and away from danger. Unfortunately, Sanchez over-compensated and gave the ball almost no pace at all.

Compounding his error is the fact that Sanchez was unaware of where Saad was pressuring. Saad jumps around the Panamanian, who could only manage a late half-step to his right in an effort to slow Saad down. In the end, Saad is basically on top of the ball within two steps, while Saragosa - the intended recipient - is shaping his body for the eventual clearance. In fact, Saragosa takes a look to his left to make sure that Sinovic isn't going to arrive to tackle him on that side. He's alert to the conceptual danger of KC trying to block the clearance, but not to where it will come from.

In other words, Sanchez puts Saragosa in an untenable situation. Saragosa tries to get in a tackle, but in doing so only invites Saad to nutmeg him and burst into the box. While it is tempting to hammer Saragosa for failing to shore up the middle after coming on as a sub for a more attacking player, it's not like he had more than half a second to anticipate Sanchez's bad pass or Saad getting around Sanchez so easily. Among the mistakes that caused this goal, Saragosa's are down the list.

This is the scene as Saad enters the box: 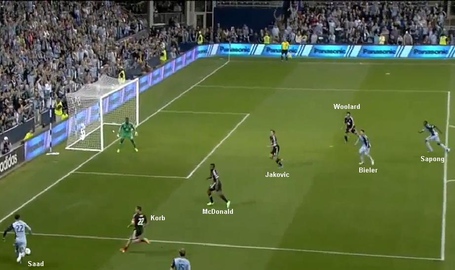 We'll start with the player closest to the ball: Korb. Our right back was closing down Saad's angle, leaving him no option but to cross from the touchline. Unless you want him to transcend space and time here, he bears no responsibility for what follows. In lowering Saad's angle but maintaining enough space to prevent a cutback - which likely would result in Saad going to goal himself - Korb did his job as he should have.

By moving to a spot just outside the six yard box, Brandon McDonald was trying to kill two birds with one stone. He was in position to tackle Saad if Korb had somehow been beaten along the endline, and he was also discouraging any hard, low ball across the face of goal. Unfortunately, in dropping so deep McDonald opened up the (narrow) lane Saad passed the ball through to find Bieler for the goal. In my book, McDonald's mistake is a bit like Saragosa's: It's a problem, but it's not among the major ones.

At the back post we have Woolard. In real time, it was probably tempting to blame Woolard at least partially for the goal, as he was the the player nearest to Bieler when the fateful shot was taken. However, Woolard was marking CJ Sapong the entire time, as is his job given the circumstances (cross coming from the left, Sapong marking a hard run from the back post towards the middle). Woolard was only in position to make that despairing lunge because, in the end, Sapong's run nearly interfered with Bieler. Then again, if Sapong weren't so aggressive, Woolard would have been able to dive straight in to attempt a block, rather than having to go slightly around Sapong to get there. It was a matter of inches, and that ended up making a difference. In my book, Woolard was doing his job marking the back post runner rather than ball-watching, and nearly saved the day with a tackle that was above and beyond baseline expectations in that moment.

That brings us to Dejan Jakovic (cue ominous music). Let's take a look at where he was before things went to hell: 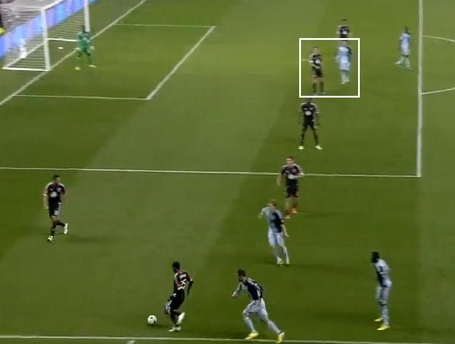 Nothing wrong with this. He was close enough to track Bieler, but not so close that there would be no room for adjustment to the cross and/or to Bieler's run. Jakovic is within the arm's reach a defender is generally supposed to be in this situation. The only red flag is where he's looking, which is not at Bieler. Of course, Jakovic has no way of knowing what Sanchez is about to do, but he crucially never manages another glance at Bieler before Saad's pass from the endline. This is how you lose crafty forwards in the box.

This is where Jakovic was roughly two seconds later in real time:Image 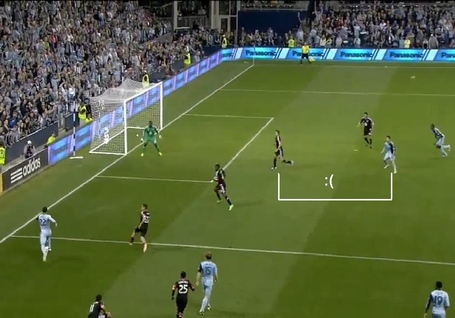 Jakovic panicked, and the result was that he forgot to look for Bieler and instead anticipated a typical MLS striker's run: Hard, to the near post. Last year against KC, this would have probably worked just fine, but Bieler is a different player from what the former Wiz had on hand in 2012.

Instead of staying marked up, Jakovic essentially made himself redundant. McDonald was already cutting off the low, hard ball across the face of goal, and if there's a goalkeeper in the league that can get down fast enough to corral such a ball, it's Bill Hamid. The only thing Jakovic could have done on the play given his position was to block Bieler's shot, but in doing so he also added a screen on Hamid (who had no chance to make the save anyway, given Bieler's wise choice to sweep the ball to the back post).

For me at least, Jakovic's mistake is even worse than Sanchez's. Sanchez had the right idea, but executed a simple pass poorly. Jakovic, on the other hand, either was outfoxed or fooled himself - probably depends on which team you support - to leave the most dangerous Sporting player wide open. After that, you can parse whether McDonald or Saragosa is third on the list of blame; it's McDonald in my book, but it hardly makes a difference. Only Woolard comes out looking significantly better, since he stuck with his man and then nearly blocked Bieler's shot in spite of the bungling that happened elsewhere.