Real Salt Lake has consistently been among the top teams in MLS for the past few years, mostly due to a consistent philosophy that was applied to a very consistent squad of players. Salary cap issues forced Jason Kreis to let some important pieces of that puzzle go, however, and the result is an RSL team that looks a little different from what we've seen in the past.

In the aftermath of D.C. United's ill-fated decision to go all in in pursuit of every trophy on earth in 2008, the club has spent years rebuilding with the idea of matching previous eras at RFK. You know the history: The club's glorious first four seasons saw us win two trophies in each season, while the mid-2000s saw the Black-and-Red consistently contending for honors. If we can't capture the same unstoppable brilliance the 90s, at least we can reach for the reasonable goal of reliably being on the short list for possibly winning MLS Cup and the Supporters Shield.

That's where Real Salt Lake comes in. After a bumbling start to their existence, former owner Dave Checketts made Jason Kreis - an active player at the time - his head coach and added former MLS goalkeeper (and occasional United color man on local TV) Garth Lagerwey as RSL's GM. Since then, RSL has built itself into a playoff regular - they've qualified for five straight seasons - that can seriously claim to be aiming for MLS Cup and CONCACAF Champions League titles every season. They've gone from a club that couldn't get anything right to a club that defines failure as "not winning a given competition."

In other words, RSL is something of a model for United to follow. However, this offseason their model is undergoing a severe test. Their failure to qualify for the CONCACAF Champions League last year meant losing the bonus allocation money CCL teams get to expand their cap and keep a larger pool of starting-quality players.

The result? Midfield dynamo Will Johnson is in Portland, while Jamison Olave and Fabian Espindola are now kicking around for a team that will never win anything. RSL used to have depth players that were ready to start at a contending level, but are now filling their depth out with cast-offs. Sure, in some cases "cast-off" is harsh - I was a big advocate of pursuing Khari Stephenson, and the acquisition of Joao Plata was less about Plata being bad and more about TFC being TFC - but the team has undeniably gotten weaker on the bench. Kreis has his most difficult coaching job since 2009 on his hands as a result.

Those changes have resulted in a slightly different RSL approach, at least based on their season-opening 2-0 win at San Jose. While RSL is still playing a heavily possession-based style predicated on passing out of the back and a narrow diamond midfield, there was a willingness to play long that wasn't there in the past. The formation itself was also slightly changed - probably due to the absence of Javier Morales, who will almost certainly not play as he recovers from offseason meniscus surgery - from the familiar 4312 to a 4132: 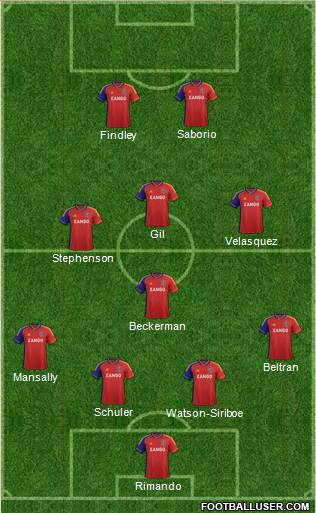 There are no question marks here, but this is by no means a first-choice team for Kreis. Nat Borchers, Chris Wingert, and Morales are all recovering from surgeries, while Ned Grabavoy is expected to miss a second game due to a personal matter relating to his wife's pregnancy. In for that illustrious group will be Kwame Watson-Siriboe, Kenny Mansally, Luis Gil, and Stephenson (with Sebastian Velasquez playing on Grabavoy's normal flank).

United's first tactical decision in throwing RSL off their game will concern how to prevent Kyle Beckerman from dictating the rhythm of the game. Last year, this was tricky due to the comfort the RSL back four had on the ball; you could try to funnel the ball to Olave, but generally forcing a team to play through one player is tough. Tomorrow it'll be easier, as Schuler is the only truly comfortable passing defender in the group. Tony Beltran has improved this part of his game, but only so much.

When pressing, United's midfield and forwards need to think less of forcing turnovers somehow and more about dictating which RSL player gets to move the ball forward and what options he'll have available. Last week, San Jose did a good job for much of the game at using Chris Wondolowski and Mike Fucito as a shield between the back four and Beckerman, and also managed to expose both Watson-Siriboe and Mansally as potential sources of turnovers. With hard work, United can replicate that and - particularly when Schuler is on the ball - force sideways passes to less reliable players. Once we get Watson-Siriboe or Mansally on the ball, the idea should be to block off the options of Beckerman and Schuler, forcing either a long ball or a more complicated pass towards the other midfielders.

Of course, United can't press recklessly. Pressing high means keeping a high defensive line, and RSL brought Robbie Findley back in part to give themselves more vertical space. Findley's speed makes keeping a high line a hazardous proposition, even with Dejan Jakovic available to chase down long balls. United's attackers will have to judiciously choose when to press and when to try to compress in the midfield instead.

In the attack, United may actually have more options than past RSL teams have given. Beltran struggled badly in marking Wondolowski at the back post whenever San Jose was going at Mansally down the RSL left. There seemed to be an issue between him and Watson-Siriboe in terms of communication and where the responsibility for Wondo was transferred from one to the other. Between our forward/forwards and our attack-minded left midfield options, someone needs to take advantage of this vulnerability (and unlike Wondo, actually convert the chances that result).

The inexperience is also an issue in terms of how RSL defends as a group. Whenever the Earthquakes managed to have a coordinated movement between Wondo and Fucito, they seemed to find big gaps to pass through. Out of this group, Beltran - who last year was the least experienced starting defender in Utah - is the most experienced player, and the lack of leadership and ability to read the game showed. As a result, the Quakes created numerous good chances that they were deadly on in 2012. United can create chances if two or three players can make runs that work in concert.

RSL also seemed to be suspect on set pieces, and this was against a San Jose side lacking both Alan Gordon and Steven Lenhart as targets and Marvin Chavez delivering the ball. They've still got good size, but there seemed to be some hesitancy and some confusion when the Quakes made rehearsed movements in the box. I imagine RSL will have worked on this throughout the week, but it's not the kind of thing that magically clears up. If the service is right for United, we should be able to get targets like Brandon McDonald free more than once.

United should be able to produce things on the flanks, particularly on our right side. Mansally has played the vast majority of his MLS minutes as a forward or attack-minded left midfielder; despite playing left back for The Gambia's national team from time to time, he often looks uncertain positionally. There's some uncertainty as to who will play where in the United midfield on Saturday, but whether it's Nick DeLeon or Marcos Sanchez on the right, someone needs to go at Mansally relentlessly. United should make a strong effort to attack down our right side throughout the match.

In the midfield, RSL asked Stephenson - who Kreis has said isn't quite as fit right now as the rest of the group - to play a more consistent role while giving freedom to Gil and Velasquez. Without the ball, Gil would often surge out of the middle and towards San Jose's left-sided players, with Velasquez providing central cover whenever this occurred. When RSL had the ball, they tended to stay close to each other for quick combinations rather than switch spots regularly.

Finding a way to shrink the field against this group - while not sacrificing our own wing play - will be important. If our wide men pinch inside too often, it will make attacking more difficult and invite Beltran and Mansally to join the attack (which they will do if we allow it).

Without Morales or the wisdom of Grabavoy, RSL is not quite as incisive going forward. Gil is promising but still has a lot to learn in terms of vision and creativity, and often relies on his admirable work rate to generate chances out of sheer hustle. Velasquez has plenty of skill on the ball, but is more of a shifty type who beats his man then looks to pass than an Andy Najar-style dribbling terror. Stephenson probably has the best passing range and a deadly long-range shot, but didn't look particularly mobile. If anything, United should be just as worried about Beckerman's late bursts into the attack - he's great at finding a pocket of space late in a move and using it to send someone in on goal - as they are about the trio in front of him.

Up top is where RSL is still as strong as ever. Alvaro Saborio showed last week that he's not just a big, physical force; his run onto Plata's ball over the top caught the Earthquakes by surprise, and he showed enough speed to have a relaxed finish rather than having to hurry to beat a tackle. It looks like he hasn't missed a beat from last year's 18 goal season, and he offers just about every kind of threat a striker can offer. Dealing with Saborio is more about making sure the service to him isn't good; it's no coincidence that Plata had plenty of space to control the ball after dropping off the front line before setting up RSL's opener. That kind of group mistake can't happen for United.

I mentioned Findley's speed earlier, and it was interesting to see that he doesn't appear to be as sharp off the ball at the moment as he was before he left for England. Still, anyone with his speed is a threat, and even if all he does is open up the field by forcing us to play a deeper line, he's having an impact. If Findley can't get much going himself, we'll see Plata in off the bench. Plata is the smallest player in MLS, but he's a gifted dribbler and has the ideas and the audacity to cause real issues.

In a lot of ways, this is a good time to be playing RSL. They're short a lot of experienced starters, and frankly they were lucky to not have a two- or three-goal hole to climb out of at Buck Shaw Stadium last weekend. That's not to say they're a pushover by any means; my point is simply that this is not the best version of Real Salt Lake, and United was great last season about beating teams when they were missing key players.

United's focus needs to be on dictating the terms of the game. When we attack, we need width and smart back post runs. When we defend, we need to get narrow to jam up the middle of the field and deny service for Saborio. If RSL is trying to win this game through Findley, Gil, and Velasquez rather than Saborio and Beckerman - that is to say, with support players rather than stars - United will be in a great position to protect RFK once again.