The Columbus Crew have started 2013 similarly to D.C. United, but that doesn't mean that they're a similar team. United is in need of a positive outing on the offensive end, and the Crew have some issues that may make them the right kind of team for addressing that. However, they also have no problem with going on the road and playing ugly, so an improvement over last week is required.

D.C. United and the Columbus Crew have started their seasons in roughly the same fashion. Both teams have a quality win, a road loss to a 2012 playoff team, and a draw that brought up more questions than answers. The details differ, of course. For Columbus, those results have been a 3-0 win at Chivas USA; a 2-1 loss at Vancouver where the scoreline is a bit flattering for the Crew; and a 1-1 home draw (with the Crew squandering a lead) with the San Jose Earthquakes.

Robert Warzycha and the Crew front office made big changes in the offseason after narrowly missing the playoffs. They signed a center back with experience in good European leagues, a holding midfielder in his 20s from the Argentine first division, and traded a malcontent and the rights to a player that isn't in MLS right now for a reasonable starter. The preseason talk from Crew Stadium rated this group on paper as being equal to their last Cup-winning squad.

So far, that big talk appears ill-advised. The center back, Glauber, tends to make at least one huge mistake per game. Highly rated central midfielder Matias Sanchez currently sits fourth on the Columbus depth chart behind Danny O'Rourke, new utility player Agustin Viana, and the oft-traded Tony Tchani. Barring one jailbreak counter in stoppage time against a beaten Chivas side that had virtually everyone forward for a corner, Dominic Oduro has looked more like the only modestly effective player we saw in 2012 rather than the double-digit goalscorer he has been in the past.

For better or for worse, this Crew team appears to currently rely almost entirely on holdovers to get things done. Unfortunately for Columbus, they aren't in impressive form either. Federico Higuain is still the star of this team, but he has yet to impose himself and dominate a game. Eddie Gaven picked up an ankle sprain and has barely played. Chad Marshall is doing alright, but pairing him with another big, strong center back that lacks speed and agility only serves to remind us that Marshall can be beaten if the ball is kept on the ground.

While the Crew might be in need of some changes, I don't expect many beyond those forced by injuries and call-ups. As such, a 4231 is pretty much guaranteed: 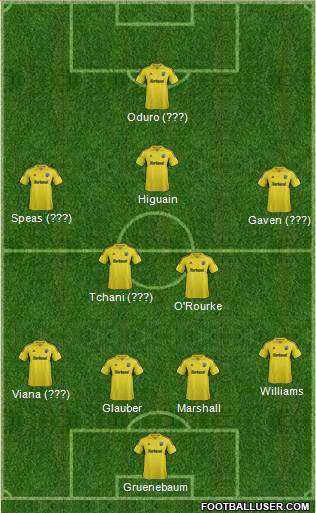 The injuries are a mixed bag of news for the Crew. Eddie Gaven is likely to return from that ankle injury, but starting left back Tyson Wahl suffered a concussion against the Quakes. He hasn't been ruled out, but it would be a surprise if he was able to play.

The bigger issue is probably the call-up, as starting striker Jairo Arrieta is in Costa Rica's squad for World Cup qualifying. The Crew will be forced to choose between two options up top to replace him: Oduro - which would require changes elsewhere that we'll touch on in a minute - or rookie Ryan Finley. Finley is more similar to Arrieta, as both rely on elusiveness and a good first touch more than any standout athletic qualities to do their work. Oduro, on the other hand, is possibly the fastest player in MLS and puts all his eggs in that basket. If you can shut down his speed, you have essentially cancelled him out.

Moving Oduro forward would mean finding a new starter at right midfield. Gaven's return seems like an obvious choice, but Gaven had previously been playing on the left. Academy product Ben Speas, coming off of a rookie season in which he didn't play much, impressed against San Jose on the left and should be in line for another start. However, Warzycha is one of MLS's most cautious coaches, and we could also see the more attack-minded Speas kept on the bench. Ethan Finlay - that's with an A, not an E like the striker - would be the choice on the right if Warzycha wants a more hard-working option on the wing, Finlay on the right and Gaven on the left would be the likely alignment.

The other two questionable spots hinge on Wahl's status. If he's out, Viana will almost certainly move from defensive midfield - where he has been adequate but unremarkable - back to the position he was billed as specializing in when he was signed. The other option would be moving Josh Williams to left back, a spot he didn't excel at last year. That would require starting someone like rookie Drew Beckie at right back, which doesn't appear likely.

Viana's defensive midfield role alongside O'Rourke seems more likely to go to Tchani than Sanchez based on the fact that the Cameroonian got the call last week to freshen up the central midfield in the 61st minute last week. If Sanchez isn't getting into a home game where Columbus needed some quality going forward, Warzycha probably isn't going to throw him in to start in a venue that has generally been unkind to the Crew over the years.

At the top of United's list in terms of winning this game should be chasing Higuain out of the center of midfield. Unlike some Latin American #10s in MLS - think Javier Morales and, before him, Cuauhtemoc Blanco - Higuain isn't able to create regularly when he drifts out to the wing. His amazing first impression last season (3 goals and 5 assists in 5 games) came before teams got to know his game, at which point he was forced wide and his production dropped (3 goals and 2 assists in 10 starts).

The production drop came because teams became good about preventing Higuain from taking up residence between their central midfielders and center backs. It's a two-pronged problem for the Crew: Higuain isn't as comfortable creating away from the middle, but perhaps more significantly the rest of the Crew attack seems unsure of where to run to help Higuain out.

Therefore, the job is simple: Make the central area hellish for Higuain. That's not to say we should be kicking him to bits, but we should be suffocating him and forcing him to spend his game playing to the right or left of center. It's going to take some strong communication and discipline, or possibly an anchor role for one member of our double-pivot, but this is a box United must check off to get the win tomorrow.

The other threats mostly come from Oduro's speed and Gaven's general shiftiness. No matter if Oduro is up front or on the right, he needs to be prevented from running onto balls over the top. If he's facing United defenders, he's probably not going anywhere. With Gaven, the things to watch out for are marking him at the back post and, when he's on the ball, winning the ball without fouling. Gaven is notorious for hitting the ground easily to make sure refs give him calls, and set pieces are a pretty important part of the Columbus attack.

How important? On Filibuster this week, Rick Gethin of Massive Report more or less guaranteed that if the Crew are going to score at RFK, it'll be on a set piece. They already have two goals from corner kicks (Glauber last week against the Earthquakes, and Williams at Chivas in the season opener) and they haven't looked very dangerous in the run of play. Warzycha's wildest dreams for this game probably feature a scrappy game and a goal from a corner kick for the Crew.

The recipe is simple for Columbus: Higuain is great at serving balls in, and Columbus has plenty of big, strong targets. Marshall and Glauber are among the biggest field players in MLS, Williams isn't far behind, and with Tchani likely coming in they make up for the loss of Wahl. Winning individual battles - or at least not losing them - and staying focused in these situations will be big.

Going forward, we need to see a big step up in how fast we move the ball. One- and two-touch soccer will help a lot in getting around a midfield that is designed for clogging the middle and keeping games tight. If we play slowly, O'Rourke and Tchani will be able to shield the defense effectively. A quicker pace will serve to draw the sometimes overly enthusiastic Tchani out of position, while O'Rourke lacks the mobility to keep up with a high tempo.

The wings are just begging for United to focus on them. Williams is a natural center back, and is not comfortable dealing with people isolating him on the wing on the dribble. This would be a fine game for Chris Pontius to break out, and if he can't make it happen we can always turn to Kyle Porter to create issues. Nick DeLeon should have a slight speed and strength advantage on Viana on the other side, and last week he was our one player able to routinely get around a defender with the ball (that final ball was another issue, but that was uncharacteristic for Amish Sisqo).

I'd also like to see our wingers cutting inside from time to time. Marshall and Glauber are old-school center backs that want to spend their 90 minutes winning headers and barging into people; they're not that strong when their speed and agility are being tested. Dwayne De Rosario should also look to face the center backs rather than drop off the front line as much as he has been doing.

I touched on playing with a quicker pace, and that goes hand in hand with having a bit more urgency. Columbus has been sluggish to start every single game they've played this season. Even the on-the-surface easy game at Chivas still saw the Goats create two legitimate breakaways before Columbus ever got going. United needs to come out flying to put the Crew on the back foot and play this game on our terms rather than what we've done in the past two games (i.e. let the opponent dictate how the game will be played).

Rather than let this game be tight and tense like the 1-0 win over RSL, this is an opportunity to score early and let the offensively-challenged Crew have to figure out how to claw their way back into the game. Columbus doesn't want to come to RFK and engage in a shootout based on current form and Warzycha's generally conservative outlook. This is a team that wants to drag us into yet another grind-it-out type of game, and I think we're all sick of that.