To complete D.C. United's 2013 punishments, the soccer gods have seen fit that the Black-and-Red must face the Houston Dynamo, their longtime tormentors. Does United have any chance against an angry, desperate Dynamo side? Probably not, but we're looking into it anyway.

For years now, the Houston Dynamo have been the worst team for D.C. United to play. Sure, Sporting KC always seems to beat us 1-0, but 1-0 means you're always in with a shout. When it comes to the side from Texas, United would love to just lose 1-0. Who can forget the worst performance in this worst-ever season, a 4-0 loss at home to a Houston side on short rest and coming off of a cross-country flight? I can't. It pops up in my nightmares. It's the game that broke Brandon McDonald.

Or that time cheating bastard Andre Hainault decked Raphael Augusto, denying United a sure breakaway at 1-0 in Houston in the playoffs? The Dynamo didn't go down a man, DC ran out of gas, and the 3-1 scoreline was too much for United to overcome at RFK in the second leg.

I could go on, but the best evidence is our record against Houston since the start of the 2010 season: 1W-2D-8L, 9 goals for, 25 goals against. The Dynamo have hung four goals on United once in each of the past three seasons.

Making matters worse, Houston is desperate. At the time of writing, the Dynamo more or less have to win this game. There are scenarios that get them into the playoffs with a draw, but it requires some generous help in multiple other games. Dominic Kinnear always keeps things simple for his teams, so the order from the start will be "go win this game, full stop."

Then there's the fact that they're angry. Houston was just knocked out of the CONCACAF Champions League in infuriating fashion, falling 1-0 to Panamanian side Arabe Unido. That's "least sportsmanlike team in CONCACAF" Arabe Unido, who benefited greatly from Jamaican referee Courtney Campbell repeatedly falling for their playacting and time-wasting. For any team anywhere, losing in those circumstances is an outrage. For a street-fighting team like Houston, whose preferred method of rule-breaking is to foul hard but be honest about it, it has to be particularly galling.

Normally this is where I'd talk about how the long trip to and from Panama would drain the Dynamo and give a well-rested United side a leg up, but I did that before the 4-0 debacle the last time we saw Houston. Kinnear traveled most of his regulars, but of them only defenders Bobby Boswell and Kofi Sarkodie played more than 20 minutes, so it probably won't be much of a factor.

Kinnear has cycled through numerous formations this season, but in recent weeks has gone back to his happy place and is playing a very basic 442: 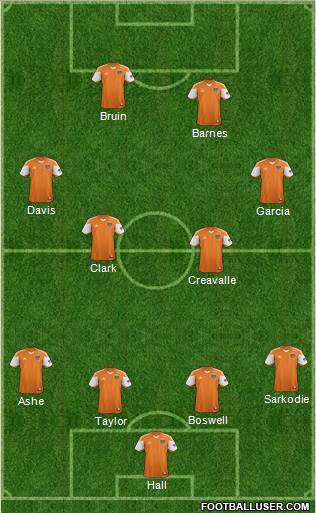 There are no question marks here, especially after the Dynamo rested in the CCL for their battle for a playoff spot. Sarkodie did take a knock during the first half against Los Arabes, but he recovered and appeared fine. In the unlikely event that he can't go, Kinnear could either push Jermaine Taylor to right back and bring in Eric Brunner at center back, or move Warren Creavalle wide and insert either defensive midfielder Servando Carrasco or playmaker Alex Lopez. Given Carrasco's limitations going forward and Lopez's inability to understand that every ball doesn't have to be a brilliant through ball, I'd expect the more conservative option of Brunner coming in.

Defensively, United's job is going to be simple, but simple things have bedeviled this team all year long. The Dynamo spray the ball to their wingers as often as possible, with Davis looking to get wide and fire in crosses while Oscar Boniek Garcia beats people on the dribble or cuts inside to combine with others. There's not much to it in terms of being an intricate plan, but who needs intricate when you have wingers like this?

Against Davis, United has to get a difficult balance right. You want to deny Davis the crossing option, so you force him inside. However, Davis is underrated at setting up that left foot of his for shots when teams sell out to stop him from crossing the ball. Chris Korb needs to use the fact that he's the faster player to constantly be in Davis's face. The more he's forced to give the ball to others to do the creating, the better off United is.

Garcia is a different animal. We can't have Garcia cutting inside regularly, because that's where he does his best work. Between his ability on the dribble - his goal against us in last year's playoffs is a prime example - and his movement off the ball, he's equally dangerous going 1v1 or playing quick combinations.

In fact, for United the best outcome would be to get Garcia to play like Davis normally does. He's still a pretty decent crosser of the ball, but if he's just staying wide and hitting crosses he'll be less dangerous than he can be coming into the middle.

With Garcia cutting in regularly, another problem the Dynamo will present is the overlapping threat from Sarkodie at right back. Corey Ashe has become a more conservative fullback over the years, in part because you don't have to provide extra width quite so often playing behind someone like Davis. On the right, though, Sarkodie's willingness to bomb forward often makes him the real source of width on that flank. He's also developed into a better crosser over time, and as we learned in last year's playoffs, he can also go to goal if given the space to shoot. Forcing him to defend regularly is the best cure, as he tends to stay home once teams prove to him that he has something significant to worry about. If Chris Pontius brings his A game, it could help United out at both ends of the field.

As much as Will Bruin has been a United killer over the years - I'm not going to look up the exact number of goals, but I'm pretty sure it's over 300 by now - I'm actually a bit more concerned with Giles Barnes, who provides a constant threat as a withdrawn forward. The Englishman is a bit of an unusual player in MLS, given that he combines real inventiveness on the ball with high-end speed.

He may not be Dom Oduro, but Barnes could very easily be the most dangerous speed threat on a day where United will be playing our slowest possible center back pairing. Of course, if you try to keep him in front of you but give him a bit of space, he can score goals like this. Like Garcia, he's pretty good at many different things, and that makes him a big worry for United.

In terms of how to slow the Dynamo down in possession, it's best to make them come through the middle. United will be doing well if Ricardo Clark and Creavalle are piling up touches while Davis, Barnes, and Garcia are struggling to get involved. That's not to say that those two are bad players, but Clark can tend to treat the ball like a ticking time bomb rather than something you want close to you, and neither is a creative player or capable of setting the tempo efficiently.

Going forward, it's important that United avoids pumping high crosses into the box. Boswell and Taylor are excellent in the air, and they're pretty smart about initiating contact to their advantage as well. Of course, we're also not a good team when it comes to crossing, but that's beside the point. Houston will be aware of all this and will be trying to force Party Boy and Nick DeLeon to stay wide and hit traditional crosses.

Those two will have to be able to overcome that, and almost as vital is the runs off the ball we get from guys like Luis Silva, Conor Doyle, Dwayne De Rosario, or Jared Jeffrey. Playing combinations or low crosses requires good movement and hard runs into the box, something that has not happened often enough for United even as our ability to possess the ball has improved of late. It's time for United to get in behind rather than simply play in front of the opposing defense and just pray for a long-range golazo. Those are nice, but you don't win games with our defense without scoring multiple goals.

I mentioned that the attack should emphasize Pontius, but I should expand on that. Not only does United need to isolate Pontius against Sarkodie regularly, but we also need to give Party Boy the chance to set up the Pontius Special. Boswell's biggest weakness is his lack of lateral speed, and for Pontius center backs like that are an inviting mark.

These things don't happen by themselves, though. We need to make sure that Taylor is kept busy so that he can't fly over to block the ensuing shot, and we'll need a credible overlapping threat from Dennis Iapichino or forwards swinging their runs wide to distract Sarkodie. Given the mismatch Pontius would set up if he can cut in and run at Boswell, this should be a major focus rather than just "one more thing" for United.

Any time we're talking about the Dynamo, we have to talk about set pieces. Garcia and Barnes do well to win them; Davis is top-notch at taking them; and with Bruin, Boswell, and Taylor they have great targets. The Dynamo also have the right mindset when it comes to set pieces. When they get a free kick, they see it as a big opportunity and step up their intensity.

For United, matching that dialed-in attitude whenever Houston gets a chance from a set piece is huge. It's been a constant problem for United this season, and against a team like the Dynamo it seems like a very likely source of goals against. It's not a tactical issue as much as a mental one. Simply put, United's players have to decide they will not be beaten, and then act on that decision. Houston's targets are all making the same decision in their heads to go win the ball or set the pick they want to set. At that point, it's just a battle of wills, and United has lost that battle all too often in 2013.