The Tradition is set to be released in cans this weekend, and we take a look at what you can expect from DC Brau's The Tradition this season in can form.

Share All sharing options for: The Tradition Comes Home

We've come full circle. An idea that was hastily created right here on this very couch I sit on to write this post is now staring me right in the face. The beer whose name I submitted for consideration in D.C. United's Brand The Brew contest about 10 minutes after the contest went live is now a can. The team announced plans to "can" The Tradition in December, and I know at least one person who was incredibly excited about it. Thanks to DC United, I received a nice promo can of The Tradition yesterday (complete with a nice DC United beer can holder) along with DC BraUnited (see what I did there) tap handle. Now, my studio apartment does not contain a kegerator (yet?) but if it did, this tap handle would get considerable use. It's very heavy and very well done, with lots of detail and the DC United crest featured at the top. I've seen these taps at several bars around the area the past couple of weeks, so those of you in need of a tap handle for your keg may want to hit up that local watering hole that has DC Brau on tap and try to sweet talk them into letting you have theirs.

The can is beautifully designed, the result of a design contest back in December where the team asked fans to decide between 3 designs. Option 2 of those 3 designs is the one that won running away and is the what you will see when you pick up your 6-pack of The Tradition. The can design is very bold, prominent, and very DCU, but still falls somewhat in line with the designs of the other DC Brau beer cans. It also contains the 2014 D.C. United home schedule on the other side, so you have no excuse of knowing when the next home match will be when you drink it. They even put the URL for you to purchase tickets to those home matches on the can. On the bottom, not only does the can have the "born on" date, but also our favorite rallying cry as well.

But, enough of the aesthetics, let's get back to the beer. Most of you were probably able to enjoy The Tradition at tailgates and bars across DC during the 2nd half of last season. It's a light beer with a lot of flavor, but while the beer I had last night was a tiny bit hoppier than the batch that was released last summer, it's still the least hoppy of the beers in the DC Brau lineup. It went down smooth and still has the taste that you'd come to expect from DC Brau. I'd even venture to say the taste was bolder than the batch that was enjoyed last summer. I can't put my taste buds on what was different, but I imagine it had something to do with allowing the flavor of the beer to keep while in the cans. I'm sure some of you out there could educate us better than I when you're able to check it out. More importantly, it's still a beer that you can enjoy on a hot summer's day (responsibly of course), but The Tradition is versatile enough to satisfy you on a nice spring day. I can think of a perfect spring day coming up that would be a great time for all of you to enjoy this DC BraUnited production!

Now that the beer has been enjoyed, this beautiful can has been washed out and will be stored away for safekeeping. It's still kind of unreal that a guy that didn't start drinking beer until January 1st, 2009 and whose last name is Wine branded a beer of any kind, much less one by a prominent local brewery that will be enjoyed by D.C. United fans. The team, in conjunction with the start of the season and the launch of the cans, is holding a happy hour for supporters on Thursday at Penn Social as well as offering brewery tours at DC Brau on Saturday, where you can be among the first to purchase The Tradition in cans or a growler. They will also be available in cans at RFK during home matches this season while supplies last. So, grab a 6-pack while they have them... I plan on grabbing several. One of the lone bright spots from last season has returned home, and its return is very welcome at least to this supporter. 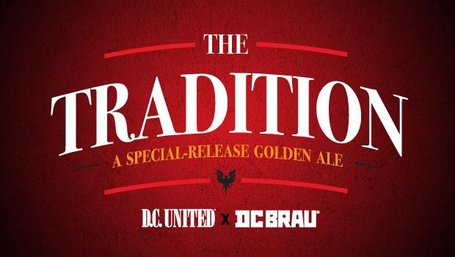