Checking out Charleston: A D.C. United fan travels to the Carolina Challenge Cup

A visit to a quiet architectural milestone in American soccer and home to where D.C. United spent the last days of the 2014 preseason.

Share All sharing options for: Checking out Charleston: A D.C. United fan travels to the Carolina Challenge Cup

When you drive along I-526 you could understandably miss it, and you could even confuse it for the Family Circle Tennis Center, which hosts the WTA Tournament event of the same name. And if you see Westbrook Brewing Company, you have gone too far. But within the leisurely pace of Charleston, South Carolina, you will find it on Daniel Island - Blackbaud Stadium, host to the Charleston Battery.

The Battery may be in USL PRO, the third division of American professional soccer, but make no mistake (and they certainly do not), Blackbaud is the first privately-funded soccer-specific stadium in the United States, completed shortly before Crew Stadium, and both were inaugurated in 1999. There are some similarities between the two: both include scoreboards at one end of the stadium, both include bleacher seating with very good sightlines. But whereas the Crew stadium has the field built "in-ground" to reduce overall height of the structure, this field is at ground level and the bleachers are built around it. 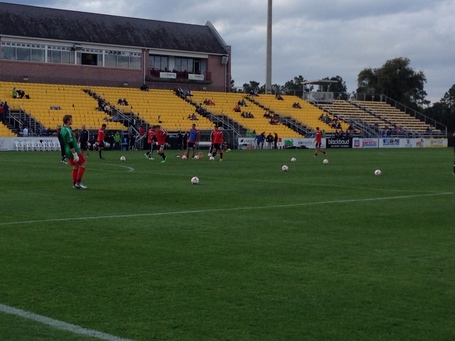 Once you get in and walk around, it would seem that as far as concessions go, the Battery have done a good job of embracing the local vendors in town and using them for their concession stands. You want barbeque, jerk chicken or funnel cakes? Depending on where you walk, you can get it at Blackbaud. The locker rooms/team offices are behind the West side of the stands and a walkway for the players is set up and kids and grown ups can shake hands with, get pics with and autographs from their favorites. On this day, a pro shop sells the Battery's merch, and a separate room on the East side of the stadium includes team-used items for purchase. The funnel cake smell abounds, as well as some of the potentially unique Charleston charm of the stadium. A fence with a sign on it warns of alligators and to not feed them ('A fed gator is a dead gator') though we are told the gators are hibernating, which causes personal disappointment.

In terms of the action, I went (duh) to see D.C. United take on the Seattle Sounders. While the traveling D.C. delegation was ample, there were a few Sounders scarves in visibility. Perhaps it is due to Clint Dempsey's arrival with the team, or to honor Eddie Johnson's time with same. Perhaps it is admiration of the Sounders' willingness to give Battery players the chance to play at the highest level in American soccer. It is no secret that Osvaldo Alonso came from the Lowcountry to become the Sounders' most recent Designated Player, but Lamar Neagle and Alex Caskey both spent time in Charleston before going to Seattle. On the other side, DC started Andrew Dykstra, himself a Battery alum and goalkeeper for the team's USL Pro title in 2012. Bill Hamid and Johnson both sat out the game for precautionary reasons, but it should be noted the slick pitch at Blackbaud (after intermittent showers the morning of the game) did no favors. 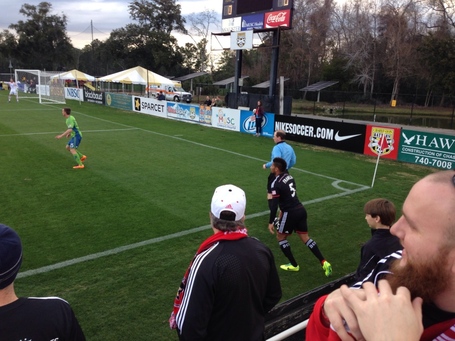 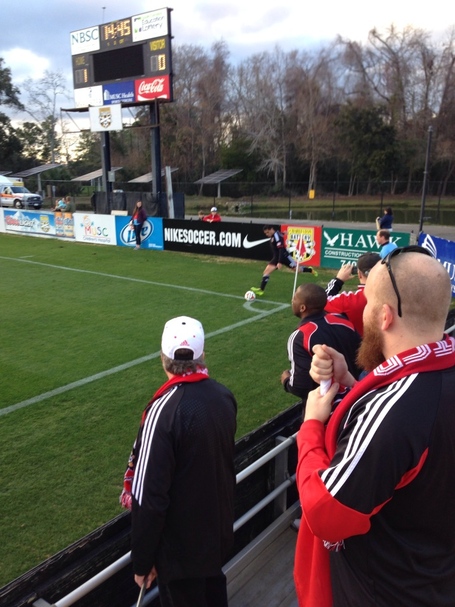 In terms of the game? Well, the game was the game, it has been discussed here and elsewhere I'm sure. I'll note that (if the cell phone shots I took are any solid reference point) it feels pleasantly weird to be close to the action as opposed to RFK. From a kismet perspective the Battery placed the traveling D.C. fans at the South end near the scoreboard, where the team buzzed around the Sounders' end for the first 15 minutes or so. At the end of the game when D.C. received the Carolina Challenge Cup, the team came over to shake hands and thank the fans for coming out/down for the game. 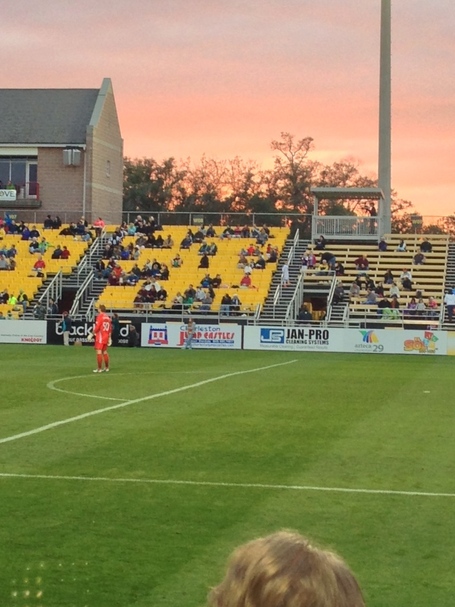 Then it was onto the Three Lions Pub, which is onsite at Blackbaud. We could watch the Battery-Houston Dynamo game there if we wished, but it also served as an excuse to fill and drink from the Coffee Pot. Steve Goff has written about the pub in the past and DC did a good video tour of same, but the Pub really is something to be experienced in person. The numerous soccer jerseys, both autographed and not, line the walls (we sat down in the pub next to a Fulham jersey from 1975!) and adorn the restrooms (women's jerseys to help distinguish the rest rooms, of course). The walls also house soccer balls and scarves from several eras as well. In an era where at the moment there is no U.S. Soccer Hall of Fame and soccer stadiums are still being built, it should be an absolute no-brainer for anyone who had the resource to do so, to make the extra space for it, keep it open past gameday hours and have a modest yet consistent revenue stream for attendance throughout the year. 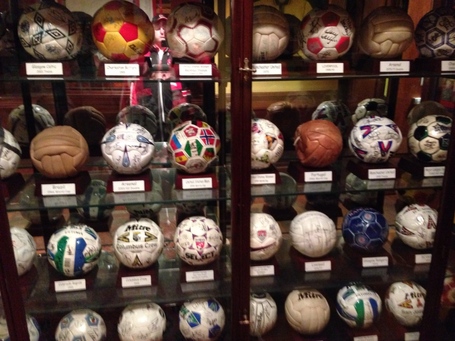 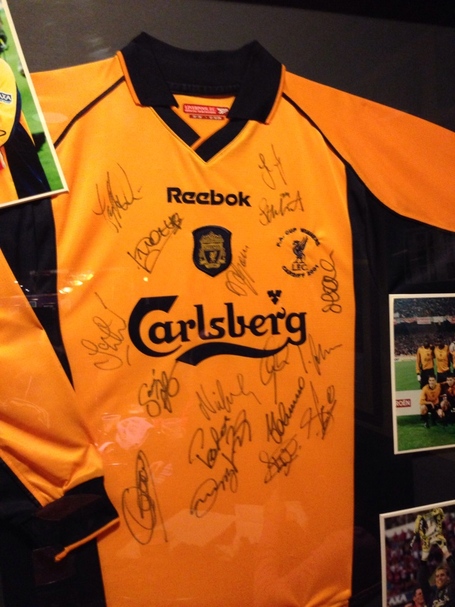 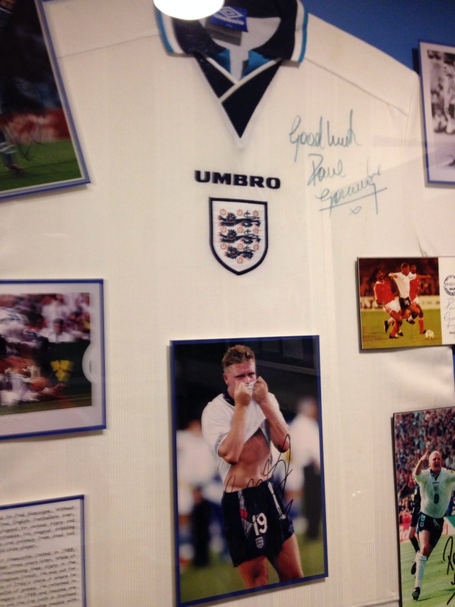 With the end of the Charleston leg of preseason, the drive back home began and eventually ended. The regular season has begun and we wonder what is going to happen next not only for D.C. United but the home they will play in now and in the future. But if/when Buzzard Point occurs, hopefully some of the ideas that Charleston employs in their home are borrowed so the most prestigious team in MLS can raise the bar yet another time.

Oh, and we can have a playful jab at our pub door like Charleston has at theirs, at our expense: 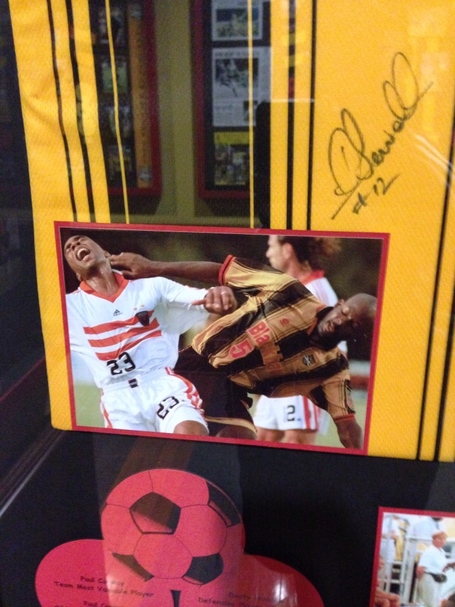