MLS Jersey Week is fast approaching, but new jerseys are already starting to be revealed. Let's see how they look, find out whether you like them, and talk about D.C. United's new training gear.

Share All sharing options for: Let's Review the New MLS Jerseys--Part I

Why do we sports fans get so excited about new team jerseys? For some reason, when our club adopts a new kit, it has a unique effect on us fans, eliciting opinions about color combinations, materials, and fit that many of us rarely discuss even about our own wardrobe. Suddenly, the toughest team supporter or the normally-fashion-challenged soccer dad channel their inner-Tim Gunn and are ready to critique the new threads as if it were fashion week in New York.

[Update as of 26 Feb 14] Click here to see all the new kits now leaked on the interwebs. Let's take a look at them all, and rate them using our exclusive B&RU 4-star rating scale. Only one is missing (which one?).

Well, count me in. Last season, Major League Soccer started something called "Jersey Week" to generate league-wide excitement about the new kits debuting. Some were huge hits (hat tip to the Colorado Rapids (times two) and the Montreal Impact) and some weren't (please step forward Houston Dynamo). Unfortunately, not every team participated in 2013, including our own D.C. United.

This season, MLS plans another "Jersey Week" which will include at least one new team jersey (home, road, and/or third) for each team. I've yet to see a firm schedule for when this year's "Jersey Week" will occur, but new uniforms are already starting to be revealed by individual clubs. In our effort to appropriately cover "Jersey Week" (and what's not appropriate about the intersection of soccer fandom, fanboyism, and fashion criticism?), we'll drop in periodically to offer commentary and solicit your inputs on the latest jersey reveals. And, we'll continue the discussion Adam started earlier this offseason about what we want to see in D.C. United's new jerseys.

So, let's get started with the first two teams to formally reveal their new kits, the San Jose Earthquakes and Real Salt Lake.

Of course, the Earthquakes redesigned their jerseys as part of a larger rebranding effort. We'll leave it for others to critique their new logo, but I have to say I'm a fan of the Earthquakes' new jerseys. They are sharp looking, have authentic elements unique to the team (such as #neversaydie on the back of the road jersey), and even the color of the road jersey is a nod to their history when the Earthquakes used to play in red uniforms during the '70s and '80s. Overall, I'd be proud to wear these jerseys if I were an Earthquakes fan. More importantly, initial reaction from San Jose fans seems very positive.

Following on the heels of the Earthquakes, RSL revealed their new home jersey today at their media day. I'm not sure this is the home run that San Jose hit last week, but there are some elements I think are cool. The silhouetted crown in the stripe is an attempt to have a truly unique element in their jersey, but I thought it was a mountain range when I first saw it (which would also be appropriate, if not unique, for RSL). It's said the club crest also has a holographic background, but that's not yet evident in photos that have been released. Perhaps not surprisingly, even fans of the club have said reaction has been "mixed", with the twitter reaction largely negative. RSL observers have also noted that this was the case in 2012 when the team unveiled new jerseys to fan criticism, but fans grew to accept them.

So, what about D.C. United? We're expecting their new jersey reveal to be on Feb. 15 during a season ticket holder event, but their new training gear has already been on display during preseason training. While they are stylistically similar to other adidas kits with the large shoulder stripe, it's hard to say if this element will migrate into the official D.C. United game jersey. Needless to say, I'm hoping the large shoulder stripes are only for the training gear, and not for game jerseys. Interestingly, San Jose has the same shoulder element on their training jersey (and it isn't anywhere to be found on their new game kits), while Adam has pointed out that adidas has incorporated a smaller version of the shoulder strip into an unconfirmed leaked version of the new LA Galaxy home jersey (and note, the Galaxy have the full shoulder stripe on their training top as well) and on the Russian national team jersey. On the Russian jersey, they've incorporated the Russian national flag into the small shoulder strip. Perhaps this is the approach D.C. United will take since so many fans seem to want to see the DC flag on the team uniform (and I have to say, it sounds like a great concept).

So, what's your take? Are you pro or con on the shoulder stripes? 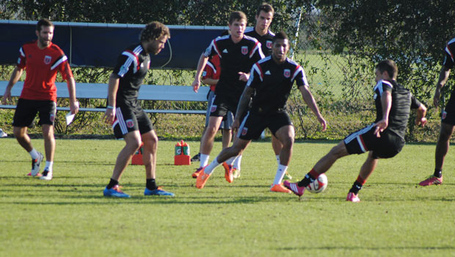